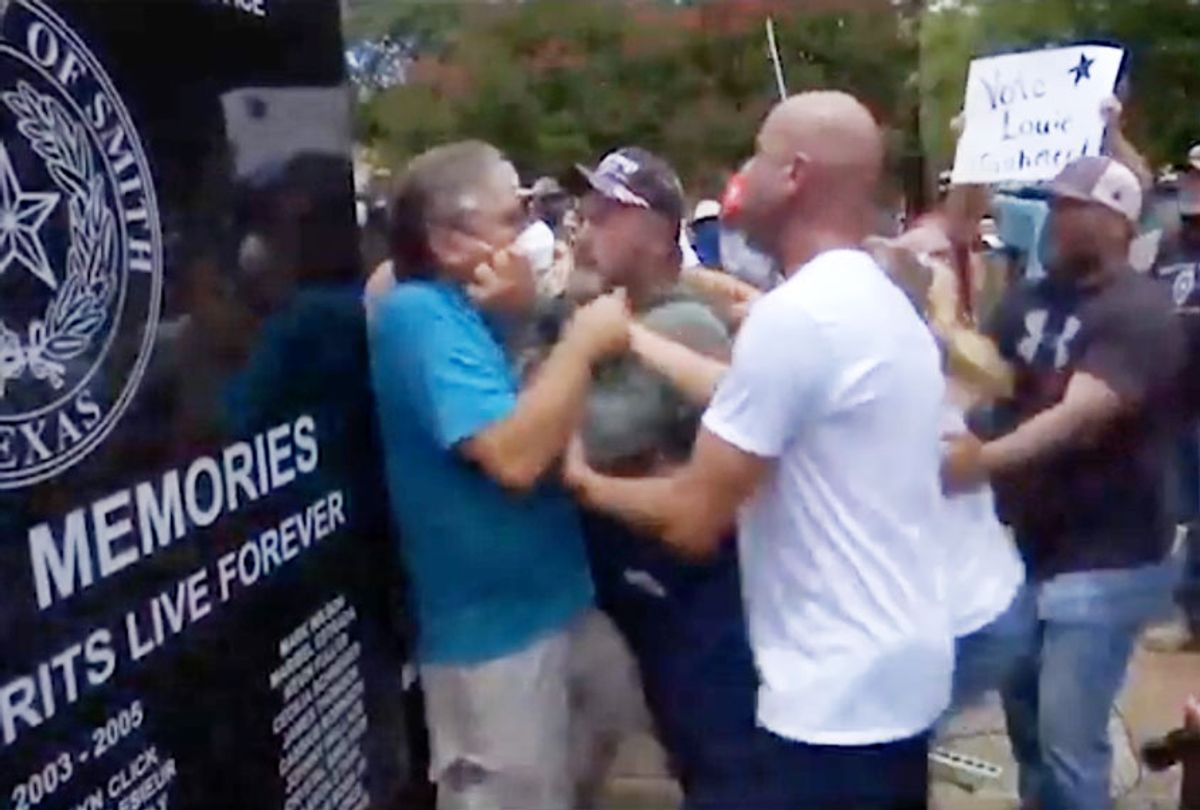 Louie Gohmert supporter choking out one of the attendees at the Tyler rally. (KETKnbc)
--

A Democrat running against Rep. Louie Gohmert, R-Tex., alleged that one of the Republican's supporters assaulted his campaign manager amid dueling protests Sunday in Tyler, Texas.

A camera crew from local news outlet KETK captured the moment a brawl broke out between members of a protest group who came out in support of demonstrators in Portland and counter-protesters who attended a "Back the Blue" event in support of federal officers deployed to the city.

Hank Gilbert, a Texas rancher facing Gohmert in his re-election race, identified one of the men as his campaign manager, Ryan Miller.

Gilbert claimed on Twitter that Miller was "assaulted and beat up" by "Blue Lives Matter protesters" while officers from the Tyler Police Department "drove around the square waving at the [Blue Lives Matter] protesters who were chanting 'Louie! Louie!'"

Gilbert also posted a photo of one of his supporters appearing to be choked by one of the "Back the Blue" demonstrators.

KETK posted a video of the incident.

Gilbert's campaign later issued a statement saying it had filed a police report with the department.

"Miller was attacked by at least four protesters, some of whom were armed, and sustained blows to the head and other parts of his body, as well as a large gash under his eye," the campaign said in a statement to local news outlet KLTV. "The incident occurred as officers from the Tyler Police Department drove around the square idly, waving at the Blue Lives Matter counter-protesters who had come to support Gilbert's opponent. "

The police department denied the allegations. Officials responded to a fight and broke it up when they arrived at the scene, spokesman Andy Erbaugh told KLTV. No arrests were made, but charges may be filed at a later time, he added.

Gilbert called on the Texas Rangers to investigate the police response to the incident.

"The Tyler police were idly driving around the square in their patrol cars and waving at the counter-protesters who were heavily armed," Gilbert said a statement. "They didn't get on the square until the violence was well underway and weren't even near the scene of the actual protest until Ryan had already been beaten up. This is after we were told by the city last week there would be a sufficient police presence downtown for our rally."

Gilbert said he would also ask the FBI to investigate whether the "Back the Blue" organizers staged the protest in order to stoke violence.

"We fully intend to make sure that felony charges are brought against the person who stole Ryan's brand new iPhone, which costs enough that theft of that device is a felony in Texas," he said. "We also intend to ensure that those who attacked Ryan are prosecuted to the fullest extent of the law."

Nancy Nichols, a local Democratic official, told the Tyler Morning Telegraph that she was also punched in the chest by "Back the Blue" protesters.

"I'm 65, and I get punched," she claimed, adding that three other protesters, whom she described as Trump supporters, allegedly surrounded her husband, causing him to fall.

"The Trump people were forcing us against the Memorial wall. I said to Mike, 'Now. Let's go,' several times. The man in overalls moved into Mike's space yelling continually," she claimed. "I stepped between them just as the man in the overalls threw a punch that hit me in my left breast. Mike dropped the cable, and we moved quickly against and along the memorial wall and away from the crowd."

Gilbert was one of the organizers of the protest in support of Portland demonstrators, though he said it was not associated with his campaign. Vince Leibowitz, one of Gilbert's advisers, told the Tyler Morning Telegraph that the armed "Back the Blue" demonstrators deterred supporters from attending the event.

"We had more than 100 people RSVP to participate in this protest, and were flooded with calls, texts and emails in the 20 minutes before it began with folks telling us they would not be getting out of their cars after seeing the mass of armed counter-protesters who had descended upon the square," he claimed.

"In East Texas, we should show respect to everyone exercising their constitutional right to peacefully protest, not shout them down and try to intimidate them," she said. "Protesters should not be met with hostility — or especially physical assault — from people who simply don't want to hear what they have to say."