Fox Business host Maria Bartiromo to Valerie Jarrett: "I am a patriot" 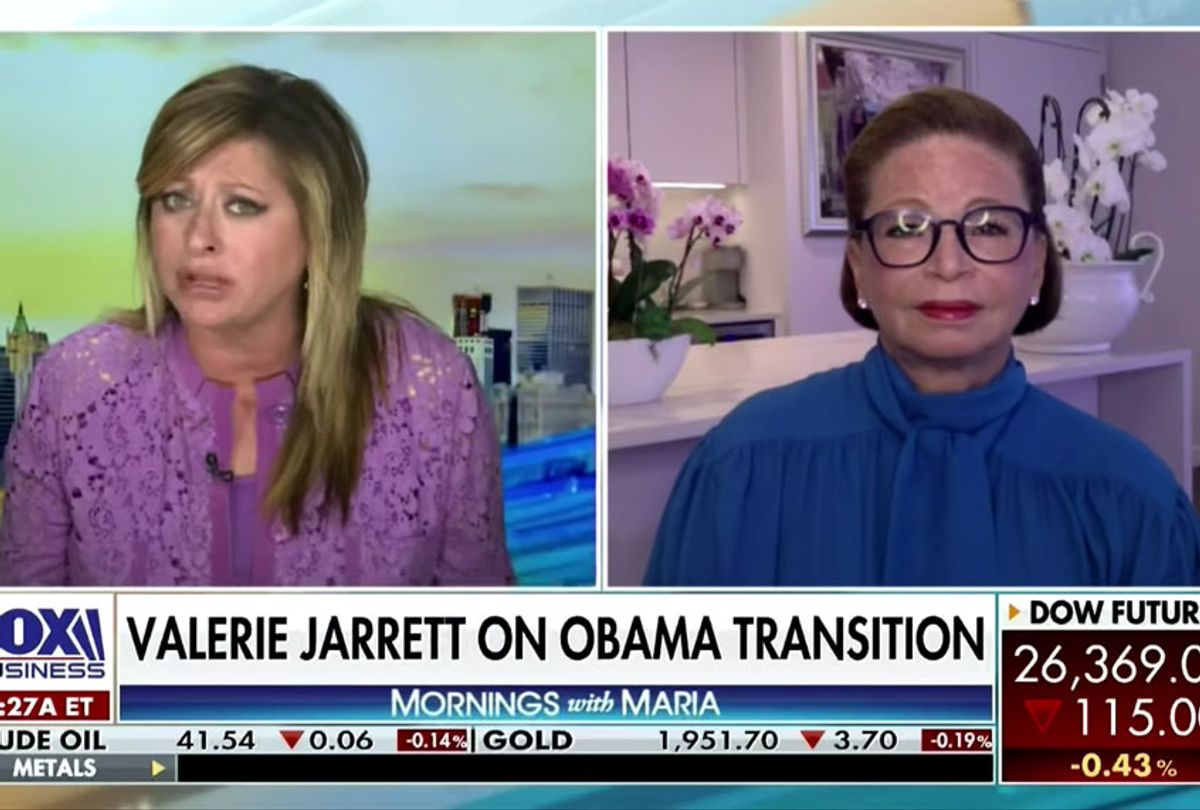 During an interview on her Fox Business program Mornings with Maria, Bartiromo berated Jarrett about whether Obama had directed the FBI to target then-candidate Donald Trump's campaign.

"That's been going on for decades as you know," the Fox News host said. "I've gone to Russia many times and have been watching this happen for decades. So we all know that Russia has been trying to meddle."

"But now we're talking about a very serious situation," Bartiromo opined, steering the interview away from Russia. "We have a criminal investigation underway. People could go to jail. Do you believe if [former FBI Director] Jim Comey knew that the dossier was fake and garbage and he kept going, re-upping warrants to spy on the Trump campaign that he should go to jail?"

"I have a high degree of confidence in our intelligence community, investigators comported themselves responsibly," Jarrett replied. "Look, Lindsey Graham is the one that encouraged Sen. McCain to turn over the dossier in the first place to the FBI."

"But I do know that it's nearly four years ago and I don't understand why our focus isn't on what's happening right now and today," she added. "That's the investigation I'd like to see."

Bartiromo interrupted loudly: "What's happening right now is we are learning the details of what took place and we are getting official confirmation that the FBI knew that the dossier was garbage and made up in a bar because the sub-source of the dossier told FBI officials in early January."

"I was not involved in any of those conversations," Jarrett revealed. "But the question I really want to put to you is, what are we doing today? If people want to have an investigation about what happened four years ago, they should do that. But aren't you concerned about what's going on right now? Aren't you worried about the integrity of our upcoming elections? Aren't you worried about how we're going to have a safe and fair election?"

"Yes!" Bartiromo exclaimed. "That's why I'm asking you this question. Because I am a patriot and do not want to see people in positions of power put their finger on the scale and make up a story that there's collusion with a foreign power when there's absolutely no evidence of that."

"You're saying you knew nothing about it?" Bartiromo demanded to know. "You were President Obama's right hand. And a lot of people wonder how much President Obama directed this."

"That's not how it works," Jarrett shot back. "We leave that to the intelligence community to bring forward information. And the dossier, I would imagine, would be one piece of a much bigger puzzle."

"The Mueller report didn't concluded that there wasn't any wrongdoing," the former Obama adviser pointed out. "He was explicit in saying quite the opposite. You're making statements that actually haven't been proven."