Dr. Fauci says it's not "dreaming" that a coronavirus vaccine could arrive by 2021

Plus, Fauci's thoughts on the vaccine's availability, Russia's vaccine, and more from the coronavirus hearing 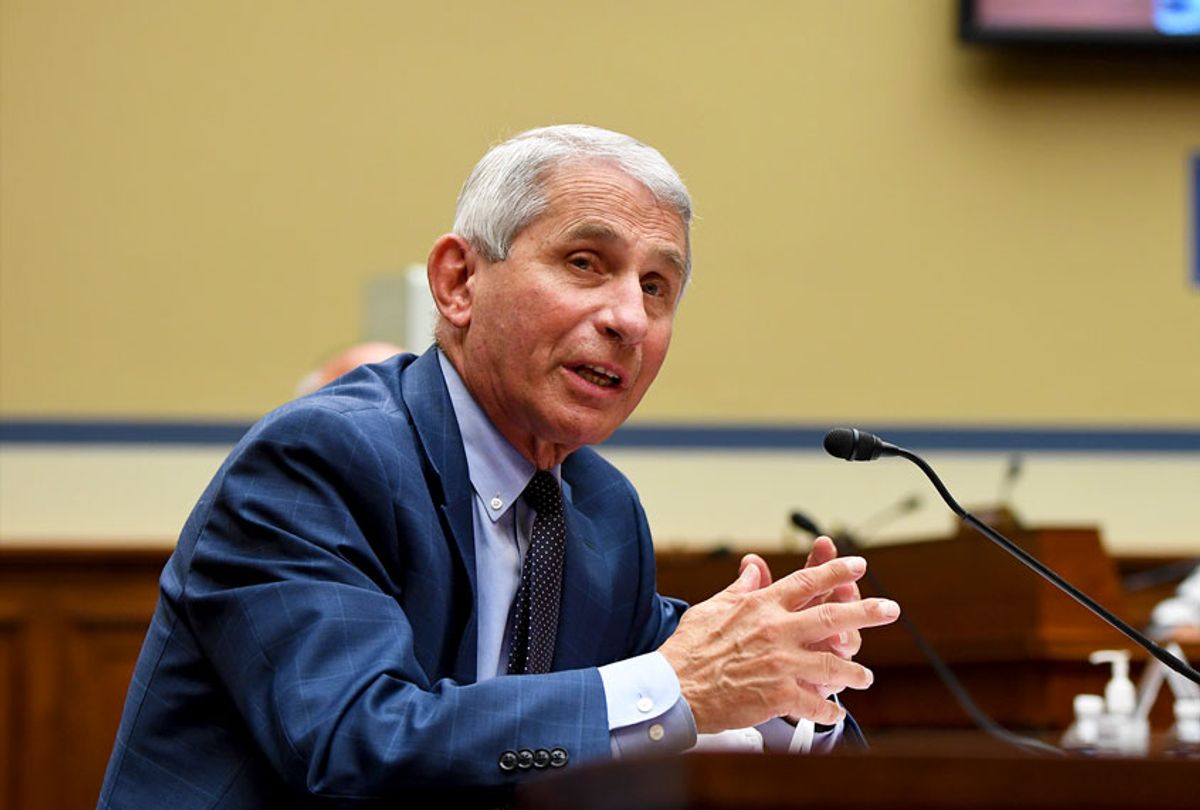 Dr. Anthony Fauci, director of the National Institute for Allergy and Infectious Diseases, testifies before a House Subcommittee on the Coronavirus Crisis hearing on July 31, 2020 in Washington, DC. Trump administration officials are set to defend the federal government's response to the coronavirus crisis at the hearing hosted by a House panel calling for a national plan to contain the virus. (Kevin Dietsch-Pool/Getty Images)
--

On Friday morning,  leading infectious disease expert Dr. Anthony Fauci and other members of the White House coronavirus task force testified before a House subcommittee on the Trump administration's coronavirus response. The hearing took place as more than 150,000 lives have been lost to the novel coronavirus and the country leads the world in total cases with over 4 million Americans infected.

Despite these grim numbers, some states continue to reopen, and many are planning on sending kids back to school this fall. The piecemeal approach to control the virus in the U.S. has been scrutinized and the subject of debate, especially as other countries have seemingly managed to control its spread and lower the number of infections.

Fauci, Dr. Robert Redfield, director of the U.S. Centers for Disease Control and Prevention and the assistant secretary for health at the U.S. Department of Health and Human Services, Adm. Brett Giroir, addressed concerns about vaccine development, the inability to contain the virus in the U.S., and more at the hearing. In case you missed it, here's what happened:

A sigh of relief came at Dr. Fauci's optimism when Rep. Maloney (D-NY) questioned if it's "dreaming" to believe if a vaccine will be available next year.

"We feel cautiously optimistic that we will have a vaccine by the end of this year and as we go into 2021," Dr. Fauci said. "So I don't think it's dreaming, Congresswoman."

Rep. Maloney also asked if safety standards and scientific integrity are being compromised for speed. Dr. Fauci reiterated that is not the case.

"As I've said often and I'll repeat it for the record now: There's never a guarantee that you're going to get a safe and effective vaccine, but from everything we've seen now, in the animal data, as well as the early human data," Dr. Fauci said.

People have often been skeptical about a vaccine actually arriving, especially since it would be the fastest vaccine to be made and distributed in history. Some have pointed to HIV, and the struggle to find a vaccine for that virus, wondering how can one for COVID-19 be made so soon? Dr. Fauci said the two viruses can't be compared.

"I think the difference between HIV and coronavirus is so different that I don't think you can compare them, because the body does not make a very good immune response against HIV so it makes vaccine development very difficult," Dr. Fauci said. "Whereas the body does make a robust immune response against coronavirus which tells us that I believe that we can get to that goal."

2. However, not every American will get the vaccine right away

Despite the expected arrival of the vaccine, not everyone can have access immediately. Instead, it's likely be distributed in phases, but that every American will eventually be able to get it within 2021.

"I believe ultimately over a period of time in 2021, if we have — and I think we will have — a safe and effective vaccine, that Americans will be able to get it," he said. "I don't think that we'll have everybody getting it immediately in the beginning. It probably will be phased in. And that's the reason why we have the committees to do the prioritization of who should get it first. But ultimately, within a reasonable period of time, the plans now allow for any American who needs a vaccine to get it within the year 2021."

Dr. Fauci added that the U.S. government is taking a "financial risk" to start developing doses of vaccines that have yet to be approved in safety and efficacy.

"We're taking a risk, a financial risk, not safety risk but financial risk.," Dr. Fauci. "The development of doses of vaccine, right now as we speak, so that they will be ready by the time we do show safety and efficacy, we'll be able to distribute it and it will be done by a number of mechanisms."

3. The U.S. is struggling to contain the virus because the country never fully shut down

When Rep. Jim Clyburn (D-SC) asked why Europe has managed to control the virus, and the U.S. hasn't, Dr. Fauci said it's because when the European Union shut down, about 95% of the region actually shuttered its doors.

"When you actually look at what we did, even though we shut down and even though it created a great deal of difficulty, we really functionally shut down only about 50% in the sense of the totality of the country, which means when we reached our peak, as they did they came down almost to a low baseline," Dr. Fauci explained. "We started off with a very difficult baseline of transmission that was going on at the time that we tried to open up the country, what we saw particularly most recently in the southern states was an increase of cases to 20, 30, 40, 50 thousand, and a couple of weeks ago it was up to 70,000 per day and now it's down between 50 and 60, and the reasons for that are complex."

Dr. Fauci also noted that some states followed the suggested guidelines to reopen, while others didn't.

As CNN reported, Russia intends to be the first county in the world to approve a vaccine within the next two weeks. China has also been making rapid progress on a vaccine, according to various reports. Despite those advances, Dr. Fauci doesn't think the U.S. will have to "depend" on other countries for a vaccine though.

"I do not believe that there will be vaccines so far ahead of us that we will have to depend on other countries to get us vaccines," Dr. Fauci said. "I believe the program that is being sponsored by us right now, and being directed and implemented by us, is going at a very rapid speed — prudent, but rapid."

Dr. Fauci added he hopes other countries are taking the necessary precautions before actually using the vaccine.

"I do hope that the Chinese and the Russians are actually testing the vaccine before they are administering the vaccine to anyone," he said. "Because claims of having a vaccine, ready to distribute before you do testing, I think, is problematic, at best."

"Should we limit the protesting?" Jordan asked. "You make all kinds of recommendations. You make comments on dating, on baseball and everything you could imagine."

"I'm not favoring anybody over anybody," Fauci replied. "I'm not going to opine on limiting anything . . .  I'm telling you what is the danger, and you can make your own conclusion about that. You should stay away from crowds, no matter where the crowds are."