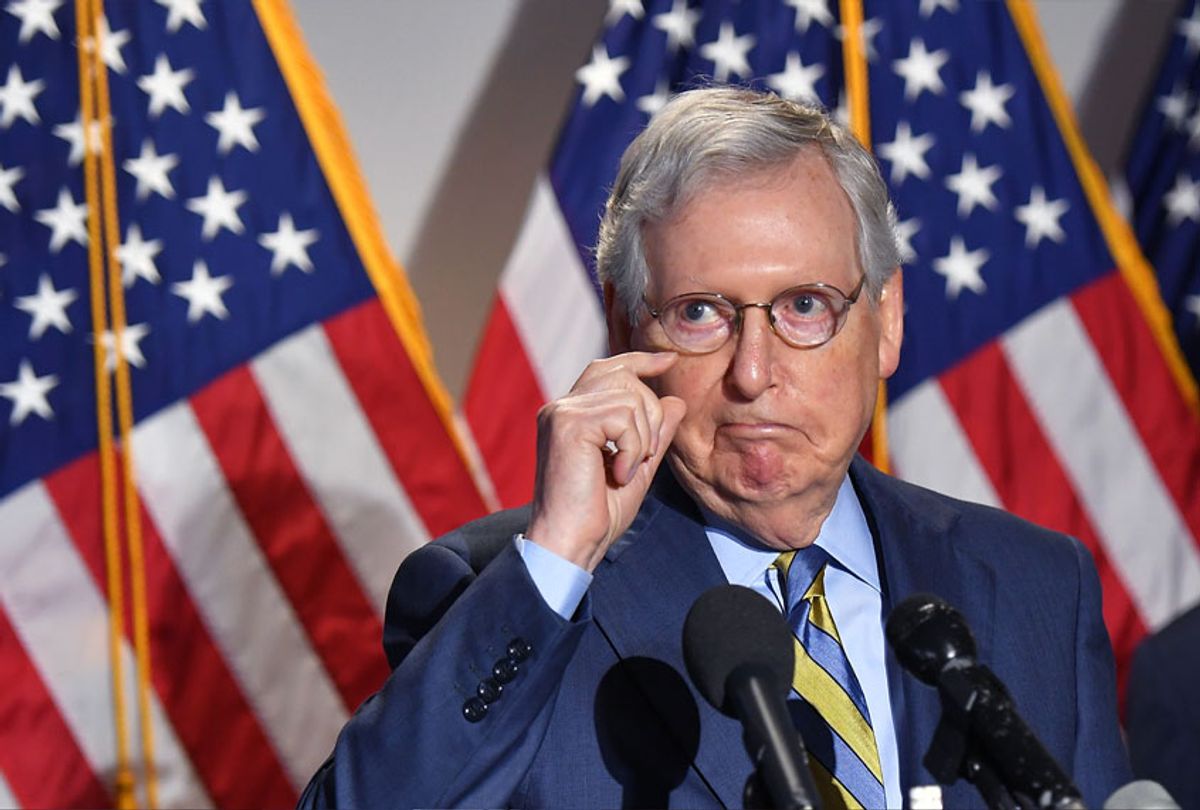 The wildest thing about the stalled negotiations between Democrats and Republicans in Congress over the competing coronavirus relief packages is how little Republicans seem to care about whether this country plunges into a severe depression, one that might rival the Great Depression of the 1930s. Every move Republicans have made this week suggests total indifference to whether or not the U.S. economy, which is already in deep distress due to the coronavirus pandemic, collapses completely. Their only real concern, it appears, is to make sure that they use this crisis to put the screws even harder to working people and poor people. It's a goal Republicans seem willing to sacrifice just about anything to achieve.

This isn't just about the unwillingness of Senate Majority Leader Mitch McConnell to work with Speaker of the House Nancy Pelosi and the Democrats to negotiate in good faith, stalling progress on a package of financial relief to address the pandemic-related economic crash. It's also that the bill Republicans themselves have proposed is a joke. If it were to pass in its current form, it would pretty much guarantee economic carnage on a scale that could make the 2008 economic crash look like a minor historical blip.

The sole reason for this is that Republicans would rather drive this country straight off a cliff than pass up an opportunity to undermine and disempower a workforce that is already overworked, underpaid and unable to better their personal economic conditions, no matter how hard they work.

There are many issues that Democrats and Republicans are fighting over in the competing House and Senate packages, but perhaps the most telling one is the fight over what form the extended unemployment benefits should take. Democrats want to extend the extra $600 weekly payments that were authorized toward the beginning of the crisis. Republicans, however, want to drop that number to $200 a week, claiming that the higher number is removing people's incentive to go back to work.

McConnell (estimated personal net worth: $34 million) is strutting around making comments like, "The economic pain is not finished. So Congress cannot be finished either," designed to make him sound like he's trying to spare the American people from further suffering, if Democrats would only get out of the way.

No one, however, should be fooled. If McConnell was serious about saving the economy, he wouldn't even consider an unemployment benefit that is so pathetically low. Around 30 million Americans depend on that $600 a week. Anywhere from one-quarter to one-third of all Americans are already falling short of making their rent or mortgage payments, and that's with the $600 weekly benefits. If that number drops down by two-thirds, we can expect people to fall further behind, and even become homeless in significant numbers.

On Thursday morning, the Commerce Department released the second quarter's economic numbers, which reflect the impact of the pandemic recession, and the report is devastating, if not surprising. GDP fell by nearly 33%, which is the worst decline in the era of modern economic indicators.

As Dean Baker at the Center for Economic and Policy Research notes, "a 43.5 percent drop in consumption of services was the largest factor, accounting for 22.9 percentage points of the drop in the quarter."

Meanwhile, because of Donald Trump's incompetence and even hostility toward efforts to fight the spread of the coronavirus, the pandemic is getting worse across the country and the economic fallout is likely to continue for months.

The only thing that can help keep this from getting worse is propping up consumer spending — which means giving people a hell of a lot more than $200 a week. As economist Paul Krugman explained in his New York Times column this week, "politicians eager to see the economy bounce back should have wanted to sustain consumer purchasing power until wages recovered."

But, as he noted, these rational arguments about keeping the economy on life support by propping up consumer spending cannot penetrate the wall of rage that Republicans feel at the very idea of working Americans having even the slightest measure of peace and economic safety.

The argument for slashing unemployment benefits is that people won't work if they can make more staying home. Sen. Ted Cruz, R-Texas (estimated personal net worth: $3.2 million), memorably made this point on CBS over the weekend, claiming that "waiters and waitresses" across Texas "won't come back because the federal government is paying them, in some instances, twice as much money to stay home."

Rep. Andy Biggs, R-Ariz. (estimated personal net worth: $4.5 million), suggested that the best number for extra unemployment benefits was zero, telling HuffPost that Congress was just "providing disincentives to go back to work."

As anyone with common sense can see, the actual disincentives for going back to work are the fact that a deadly pandemic tearing through the country and the inevitable consequence that there's not much work to go back to, because public-facing businesses can't run profitably when most potential customers are sitting at home.

There's plenty of evidence to back up this common sense. As Krugman pointed out in a graph-laden and "wonkish" Twitter thread, generous unemployment benefits "didn't prevent a rapid rise in employment during the abortive reopening recovery" of May and early June, because "the workers accepting jobs were precisely the workers who by and large were receiving more in unemployment benefits than from work".

He also added that unemployment insurance "was helping employment, not hurting it" but the "massive fiscal contraction now being perpetrated" by cutting unemployment will absolutely hurt overall employment numbers, by inflicting major damage on the overall national economy.

Former Treasury Department economist Ernie Tedeschi, appearing Tuesday on CNN, agreed with Krugman, saying that "the generosity of unemployment insurance had no relationship in April or May with the likelihood that workers either found a job the next month or left a job the next month."

These proofs that Republicans are simply wrong — or are flat-out lying — are important. But even setting that aside, it's worth noting that Republican talking points are offensive on their face. They are quite literally accusing American workers of being lazy slobs who have to be literally forced to go to work, on pain of starvation.

And this cannot be stressed enough: A major reason 30 million are unemployed is there isn't nearly enough meaningful work to do. Bars, restaurants, hotels and stores are not exactly flush with customers, even in places where they're open at all, because most Americans are sensibly staying home rather than risking their lives to get baby-back ribs and a fruity cocktail at Applebee's. There's no reason for workers to show up for jobs that don't need doing, or to risk their own health to do so. Republicans are literally suggesting that people are lazy because they won't go to work at jobs that don't exist.

That's ultimately what all this is about: Republicans refuse to put a pause on the class war, even for a few months, to get us through a pandemic. If anything, McConnell and his fellow Republicans are treating this as an opportunity to grind down American workers and make damn sure they know their place, and to lower the already basement-level expectations of what ordinary people deserve from society in exchange for a demonstrable willingness to work — if there are jobs available, which at the moment there are not.

Republicans were largely responsible for crashing the American economy in 2008 too, but the people who paid the most painful price were not Republican politicians or the wealthy corporate interests they represent. On the contrary, the richest Americans saw their already gargantuan share of the nation's wealth grow even bigger, while working Americans found it ever harder to get by on a day-to-day basis. There can be little doubt that Republicans see this pandemic as yet another opportunity to increase the already-massive gap between the rich and everyone else.

We can already see how the economic stress is helping bolster long-term Republican goals to enshrine and deepen this country's outrageous levels of economic inequality. New polling from Time's Up and Perry Undem shows that the coronavirus recession has caused the income and wealth gaps between men and women, and between white people and people of color, to grow dramatically. No wonder Republicans aren't overly eager to fix this economic collapse — it's doing more than they ever could through the legislature and courts to push people they despise even further behind.

Republicans' most important agenda item is to crush working Americans, especially those who are not white men, under their heel, while continuing to line the pockets of the ultra-wealthy. Nothing, up to and including the total collapse of our economy, will divert them from this mission. Driving ordinary Americans down to starvation wages, and breaking their political power and their will to resist in the process, is worth any amount of destruction.