"Where are the good Americans?": "Immigration Nation" brings systemic exploitation to our TVs 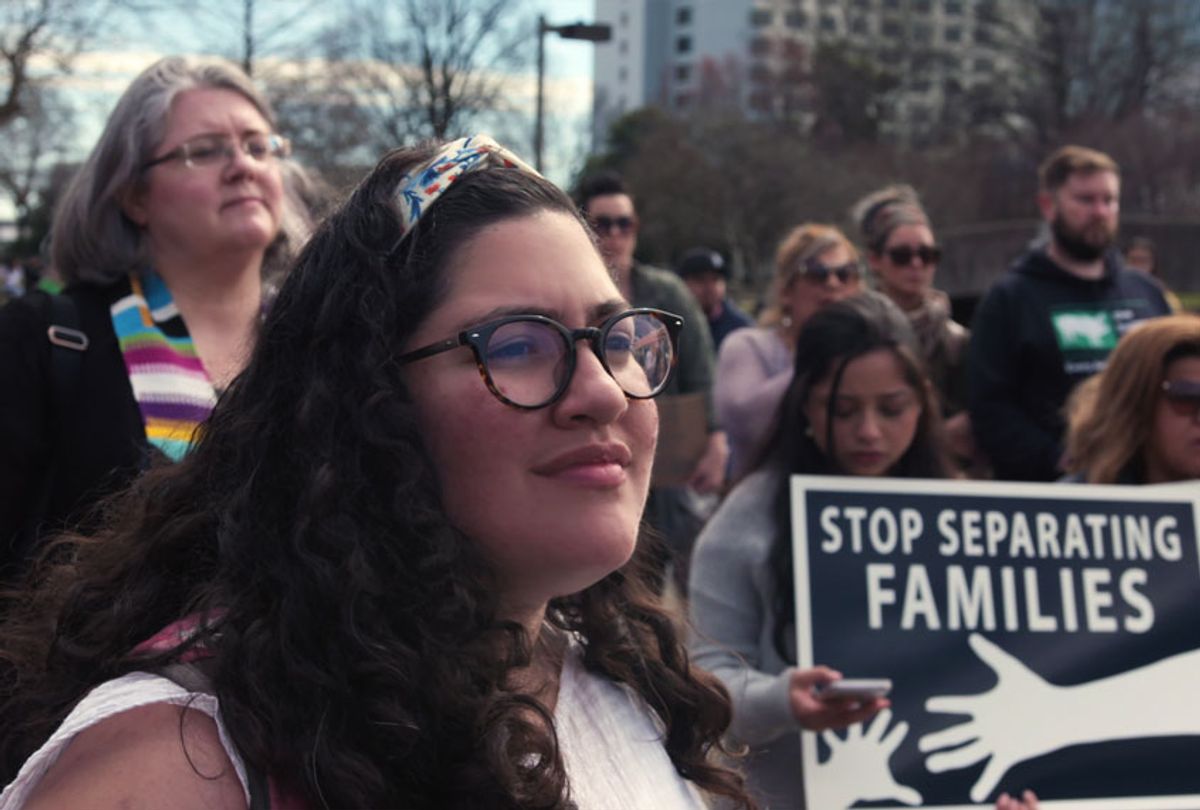 Overwhelmed as we are with video documentation of systemic injustice in action, it is far too easy, even excusable to a degree, for people to bypass "Immigration Nation." State-sanctioned violence against protesters in our streets is a regular feature on the evening news and in social media streams. Bearing witness to the suffering placed in front of our eyes day in and day out is indeed traumatic.

Proposing that viewers sit through six hour-long episodes breaking down the extent of the American immigration system's brokenness, from the perspectives of Immigration and Customs Enforcement agents to the migrants and that of asylum seekers caught in the system and everyone in between, may feel like too much of an ask.

Until, that is, a person realizes that this very subject is connected to all of the conversations we're having about law enforcement at this very moment. ICE officers were part the federal law enforcement group deployed to Portland, Seattle, Chicago, and other cities under the guise of protecting federal buildings but, in reality, to create chaos where it largely didn't exist.

They are part of a branch of government, the Department of Homeland Security, which has come under added scrutiny from former and current government officials and experts who regarded these actions with alarm. In the case of former congresswoman Barbara Boxer (D-CA), the professed feeling was regret over having voted for the formation of DHS in the first place in 2002, a year following the terrorist attacks of September 11, 2001.

"I never thought that the Department of Homeland Security would be used against our own people," Boxer wrote in an opinion piece for The Washington Post. "I never envisioned a dictatorial president, a tyrannical president, a desperate president. I was myopic."

Shot over the course of three years, "Immigration Nation" explores the extent to which our immigration system doesn't work and hasn't worked for a very long time while demonstrating how much needlessly crueler it has become under this administration.

As the film explains, under previous administrations, ICE's priority was to deport immigrants arrested for committing serious crimes. Within days of Donald Trump's inauguration, he signed an executive order shifting priorities to remove all immigration violators. Hence the footage dominating the opening hours of the series showing people being put in chains during early morning sweeps in April 2018 and parents being ripped away from their families.

Their cries are familiar and nevertheless haunting. As one father talks about being separated from his young son, he relates to the filmmakers the vast gulf between his dream of what he believed Americans to be based on a meeting with American missionaries visiting in his childhood church versus his reality of being imprisoned for simply wanting to make a better life for himself and his family. "Where are the good Americans?" he poignantly asks.

How simple it is to turn a blind eye to the inhumane actions of an organization acting in our name, presumably to protect us, until that inhumanity knocks on our own front doors.

While on its surface "Immigration Nation" is a reminder of how immigrants are treated under this administration, it's also a useful parable to enable the layman's understanding of, as human rights attorney Becca Heller eloquently explains, "the brilliance of any bureaucratic system whose net result is fear and trauma." Any, she says. Not just this one.

How so? "It's big enough to break it down such that everyone just thinks they're only moving papers, or only doing a little piece," Heller explains, "and a very small number of people at the top have designed the system such that, like, an incredible amount of terror or trauma results, but most people are completely divorced from that."

She breaks it down concisely: ICE is a government agency that is not in and of itself evil. But the people who work for that agency are caught up in a policy net that's beyond their understanding, to the point that they can look at what they're doing on a day-to-day basis and call it justifiable.

And this is the common refrain heard from the ICE agents appearing in "Immigration Nation": We have to enforce the law. We have to follow the orders we've been given. "It's a job and somebody has to do it, and that somebody is you," one officer observes, explaining that she's learned to separate her personal feelings about what she's doing from the requirements of her work.

There were eight units of ICE Fugitives Operations when Immigration and Customs Enforcement was established in 2003. Today, the series reveals, there are 129.

On one of the days filmmakers Shaul Schwarz and Christina Clusiau ride along with her, that same officer encounters an apartment filled with undocumented workers that her team enters (by exploiting their targets' lack of understanding of their rights, which also is caught on film) on a search for one person.

Collaterals, is the term used – as in, extra bounties meant to make the branch's enforcement stats look better. In the context of conversations about the dehumanizing process of the justice system, it's educational and chilling to hear how human lives deemed valueless are referred to: a "pregnant female," a number, collateral or just bodies.

The first two episodes return us to 2018's ICE raids in cities across the country and the Trump administration's fearmongering about migrant caravans invading the United States at our Southern border. Those factors may leave a person with the impression that the series is retracing familiar territory.

It does in some respects, which explains why ICE may have allowed the production staff a level of access extensive enough to be unwise from a public relations perspective – something the Trump administration realized too late. But the series' major strength is in its exploration of the rolling impact of these policies.

One episode follows the plight of deported veterans who served in combat units from various branches of the United States military. Another examines the senseless toll that certain programs are taking on immigrants and asylum seekers prevented from reuniting with their families purely out of spite and cruelty. Yet another installment depicts the ways that immigrant labor is exploited by companies which, among other things, withhold payment for work and threaten those who challenge them with deportation.

Each step shows the myriad ways that our immigration system is a labyrinthine wreck, on purpose. It is designed to ensure that immigrants seeking asylum "the right way," – that is to say, presenting themselves at a port of entry and asking for asylum – are unsuccessful in its most benign form, or abused to make an example of them, with the thought of being a deterrent. And it also depicts how a structure created to protect innocent lives ended up being used against the world's most vulnerable.

A New York Times story reports that White House officials have threatened the filmmakers with legal action and sought to block parts of Schwarz's and Clusiau's work, and there is some evidence of concessions on the part of the filmmakers, including identifying ICE agents appearing on screen only by their first names, with their last names redacted.

Of course, a Google search makes it simple enough to identify a few, including the New York City deputy field office director who gleans entertainment from the visible suffering of the people swept into his office's holding cell. He has since retired, according to a statement DHS officials requested the filmmakers append to the close of the episode in which he's featured.

No matter, given how fairly Schwarz and Clusiau treat all of their subjects, be they ICE agents, human rights lawyers and other specialists, and the migrants themselves. The agents that come off looking badly do so of their own accord. Indeed, one of the series' most humane, heartbreaking moment shows a Border Patrol Search, Trauma and Rescue Unit medic treating a man, tearful and dehydrated, his lips spiked with cactus thorns. A few beats later, though, that same medic is telling his colleague how "fun" his job is, and he doesn't mean the part where he helps people. He's referring to the part where he hunts them down.

Beyond any other image concerns, though, is the series' assertion that these problems aren't expressly of this administration's making. It leaps back through time to Bill Clinton's administration and points out the exacerbation of confusion created by the formation of DHS under George W. Bush, and the horrifying admission, in documentation, that part of measuring success in shifting border enforcement policy would involve a body count.

Useful, too, are the observations of John Amaya, ICE's former deputy chief of staff under Barack Obama (who earned the nickname "deporter in chief") regarding the inconsistencies in asylum law definitions in terms of "the right way" and "the lawful way."

"I don't even know how to describe it," he says, "this undescribable phrase of doing it 'the right way,' whatever the hell that means. Because anyone who understands asylum law knows that when people present themselves at the port of entry and request asylum, that is doing it the lawful way. Now, it may not be the right way in this White House's view, but I'd like to know what they mean by doing it the right way. Because it's the lawful way."

Later Amaya reveals that he understands the definition completely, stressing that in his opinion, it is this administration's goal to tear families apart, bring them maximum pain and use that as a deterrent.

But as the series concludes, such deterrents don't work. Not at the border, not in Portland or other cities. People will keep on risking life and limb in the pursuit of a better situation. That was always the immigrant's story and that of every marginalized group living in this country. "Immigration Nation" simply brings it home for us at a time, hopefully, that people are more likely to listen.