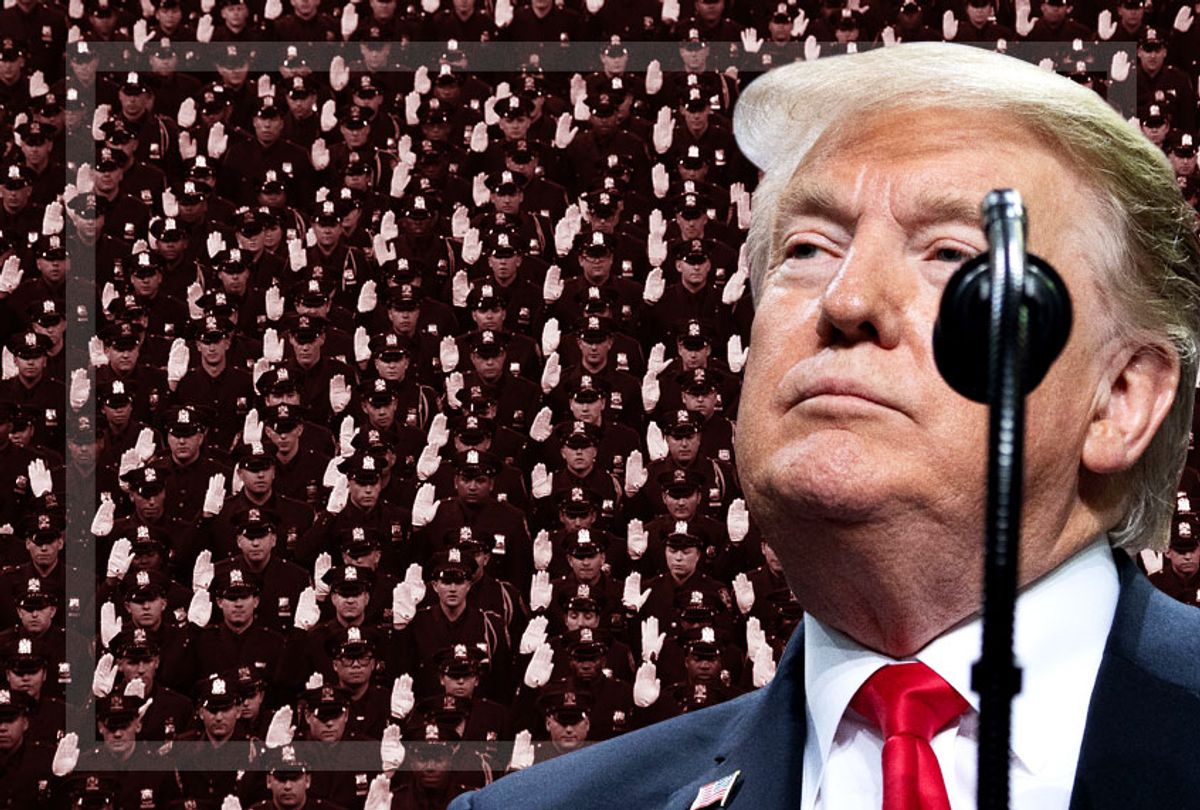 President Trump held his fourth rally of the 2020 campaign in Panama City Beach, Florida, on Wednesday night. As during his many 2016 campaign stops, Trump rallied the faithful in the Florida Panhandle by fear-mongering over an "invasion" by migrants at the U.S.-Mexico border. He claimed that there are “15,000 people marching up” and only “two or three border security people that are brave and great,” and who to complain, by the way, that “we don't let them and we can't let them use weapons.”

“We can't. Other countries do. We can't,” the president intoned before asking, “How do you stop these people?"

"Shoot them!" someone shouted from the Florida crowd.

"Only in the Panhandle you can get away with that statement," Trump replied with a chuckle and an approving nod.

It’s no surprise that the president would provide tacit endorsement of an audience member’s call to murder unarmed people, many children among them. It’s not new. As the Atlantic’s Adam Serwer noted early into the Trump administration, “the cruelty is the point” because the president is intentionally playing to the worst instincts of his supporters. In the third year of his presidency, Trump’s ghoulish laughter at the prospect of mass murder is more than just a campaign tactic — it is a strategy complete with a policy that's already being implemented.

Before the president arrived in Florida for his rally on Wednesday, his Department of Justice announced a new program in the Sunshine State aimed at persuading local law enforcement officials to break the law of the land on Trump’s behalf. Immigration and Customs Enforcement (ICE) on Monday announced the launch of a program that would allow local law enforcement agencies to start arresting and detaining immigrants on ICE’s behalf, even if local laws or policies — such as “sanctuary cities” — explicitly prevent them from doing so.

ICE has promised that local jurisdictions that join the new program will be temporarily exempted from any local or state rules preventing them from cooperating in immigration arrests or detention, according to an agency release. The newly announced Warrant Service Officer program requires only one day of training. Eleven jurisdictions in Florida have already signed up to participate.

ICE argues that the outsourcing of federal tasks to local officials, with no increase in funding, is necessary because for the agency to do the work itself would just be too hard. Acting director Matthew Albence complained that so-called sanctuary cities “undermine public safety” by adopting policies of non-cooperation with federal immigration authorities.

But utilizing local police to function as an arm of ICE runs  counter to lessons learned from years of community policing initiatives. Dozens of sheriffs and police chiefs across the country have endorsed sanctuary policies because they encourage increased community engagement. Additionally, if local police are spending time chasing down immigration violations, they're not policing their normal beats, which could mean serious crimes go unsolved. With the backlogs of detainees that ICE already complains about, it's har to see how this helps the agency in any way? It still has to take over each immigrant detainee’s case within 48 hours, or the individual is released.

“This program is just the latest scheme by ICE to enlist local police in its abusive deportation agenda,” said Lorella Praeli, deputy national political director at the American Civil Liberties Union, in a statement. “ICE is asking local law enforcement to risk violating the Fourth Amendment. We urge local law enforcement to resist this dangerous proposal and stand by their commitment to the communities they serve.”

At best, such a policy works in areas that are already willing to support ICE. Any local officer carrying out Trump’s orders on behalf of ICE in a sanctuary city may be sacrificing his or her job.

Trump is spiteful in more than rhetorical terms. He appears to proposes policy not based on its effect but solely because of how it will be perceived by his base. Arresting immigrants in large numbers is a way to spread fear in more communities and to punish those perceived as disobedient. On multiple occasions, Trump or his minions have proposed releasing undocumented immigrant detainees into sanctuary cities as retaliation against political foes.

While the Republican Party claims to stand for limiting governance to its most localized essence, the administration's move to trump local law comes less than a week after the Florida legislature passed a bill banning sanctuary cities in the state.

ICE has paid out millions in tax dollars to private companies eager to participate in an unregulated prison system. Previously, the private prison industry had been losing business as the legalization or decriminalization of marijuana broadens across the country. Trump has expanded ICE’s war on undocumented immigrants, which has paid dividends for corporate prison giants and major GOP donors, like GeoGroup and CoreCivic. His xenophobic rants turn ICE into beloved heroes among his base, and encourage greater cruelty from agents. It's a nightmarish win-win.