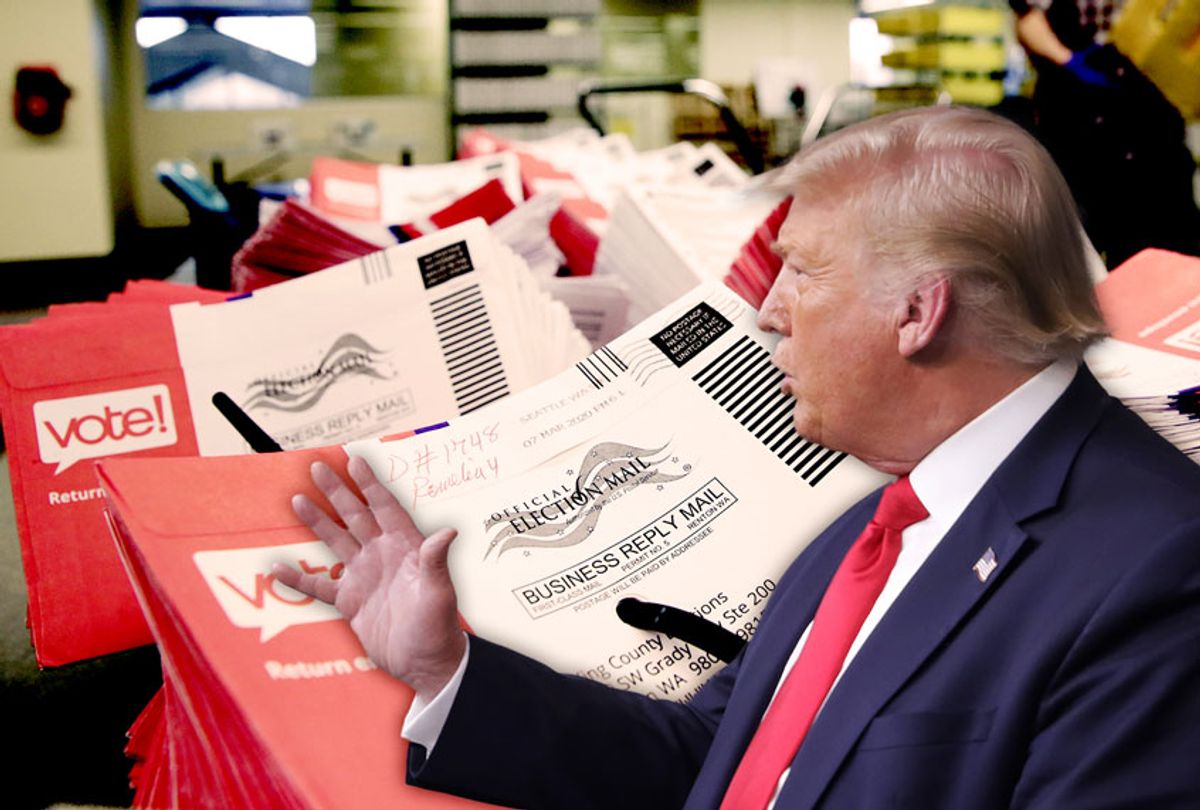 I don't know about you, but when I saw Donald Trump do an abrupt pivot on his crusade to depict mail-in voting as a form of voter fraud on Tuesday, I felt the hair on the back of my neck stand up.

That certainly wasn't because I believe he's seen the light and has realized that mail-in voting is perfectly safe, or that he realizes it's imperative at a time when in-person voting may expose people to the deadly coronavirus. No, it was because he singled out Florida as the one state he believes really knows how to handle elections. Anyone who was around 20 years ago to observe the 2000 election will understand why I felt that awful sense of dread.

You may recall how that disputed election result, with a 538-vote difference in Florida and a recount in progress, was decided in favor of the Republican candidate — whose brother just happened to be the governor — fdhelped along by the conservative majority on the Supreme Court, two of whom happened to have been appointed by their father, the former president. Let's just say that the Republicans controlled the levers of government and they knew how to use them.

The same is true today. Here's what Trump said at his daily perfunctory coronavirus briefing on Tuesday when questioned about his change of tune on mail-in ballots in Florida:

"They're so well run. Florida's a very well run state," he added. "Low taxes, low everything. They've done a great job. Really a great job. And the two governors, between the both of them, they've really got a great system of absentee ballots and even in the case of mail-in ballots."

Obviously, DeSantis and Scott got Trump on the horn in the last day or two and told him that he was screwing up their chances of winning Florida with his frenzied campaign against mail-in voting. There are a lot of senior citizens in Florida, a group that distinctly skews Republican, and they like to vote by mail. I'm sure they also reminded him that DeSantis had already gone the extra mile to disenfranchise the 744,000 ex-felons whom the state had voted to allow back on the voting rolls by instituting what amounts to a poll tax. (That would be the clearest reading of this Trumpian phrase: "Florida's Voting system has been cleaned up we defeated Democrats attempts at change.")

Florida Republicans have the system wired, which is why Trump has now excluded his adopted state from the list of states that he claims are rigging the election against him with mail-in voting. I won't be surprised to see him endorse the practice in others as well, if governors there are able to assure him that they'll look out for him.

But he doesn't seem to understand how this muddles his case. After all, one of Trump's primary objections to voting by mail is that the Postal Service is incapable of handling all the ballots. But unless Florida uses a different system to deliver ballots than the rest of the country, it's hard to see how they can escape this calamity. And saying that only Republican-run states can competently handle vote by mail is too transparently self-serving, even for him.

According to the Washington Post, 78% of American voters can vote by mail in November. Thirty-four states and the District of Columbia already allowed anyone to vote absentee for any reason, well before the pandemic. There have been some adjustments in the process in some states to accommodate the coronavirus, but mail-in voting is perfectly normal. While the system may be strained this time because more people will use it, this manufactured hysteria is ridiculous. Unless Trump is able to destroy the Postal Service, as Salon's Bob Cesca predicts he may be able to do, and unless the media decides to re-run its destructive coverage of the 2000 election, which they claim they have no intention of doing, the only chaos will likely be coming from Trump's camp for his own purposes.

With all his braying about the election being "rigged," it was pretty obvious back in 2016 that Trump believed he wasn't going to win. There's even some famous footage of him on election night giving a very tepid thumbs-up, looking stunned and even despondent.

The following was tweeted just as Trump took the lead in Electoral College votes:

Trump had said, "It's very possible that I could be the first presidential candidate to run and make money on it," and that didn't really work out for him. So I'm quite sure he was looking forward to making up for it once he lost. He was no doubt planning to parlay all that attention into a rumored media empire and completing those big deals like the Trump Tower Moscow plan he'd had to drop. He'd had fun on the campaign trail but actually being president clearly wasn't something he'd thought too much about.

This time I think Trump really does want to win, if only to prove that he has a legitimate claim to the White House. (Protecting himself from legal trouble for another four years would be nice too.) But even someone as thick as he is can read the polls, and I would guess that he's plotting to turn defeat to his advantage if the worst happens.

It would seem that his plan is to sow chaos if possible, challenge the result where he can, and claim that Joe Biden's victory is illegitimate, regardless of the margin of victory. He can then set himself up as the president in exile, free to make money from speaking fees and books while trying to rehabilitate his tattered "brand." Perhaps that rumored media empire will finally come to fruition. Most importantly, he'd be able to keep his cult alive with the tantalizing promise of a rematch in 2024.

I have no idea if Trump would actually want to do that — he might want to pass the torch to Don Jr. or Ivanka, and there's no guarantee Republican voters would play along all over again. But in many ways, losing will offer him the opportunity to do what he loves to do most, and make money while doing it: tweet, shoot the breeze with media sycophants, play golf and bask in the adulation of his adoring fans. Who knows, he might even hold rallies. He could have all that without all the unpleasantness of trying to do a job he has never been able to figure out how to do.

It's depressing to think that Donald Trump won't simply fade into obscurity if he's defeated this fall, I know. But I think he's going to be like that obnoxious party guest who's always the last to leave, whether we like it or not. The silver lining is that if he does decide to stay in the game, he'll be like a lead weight dragging down the Republican Party for another four years. You know he's going to make their lives even more hellish than the Democrats — and after their cowardly enabling of his monumental failures and criminal misdeeds, it's exactly what they deserve.