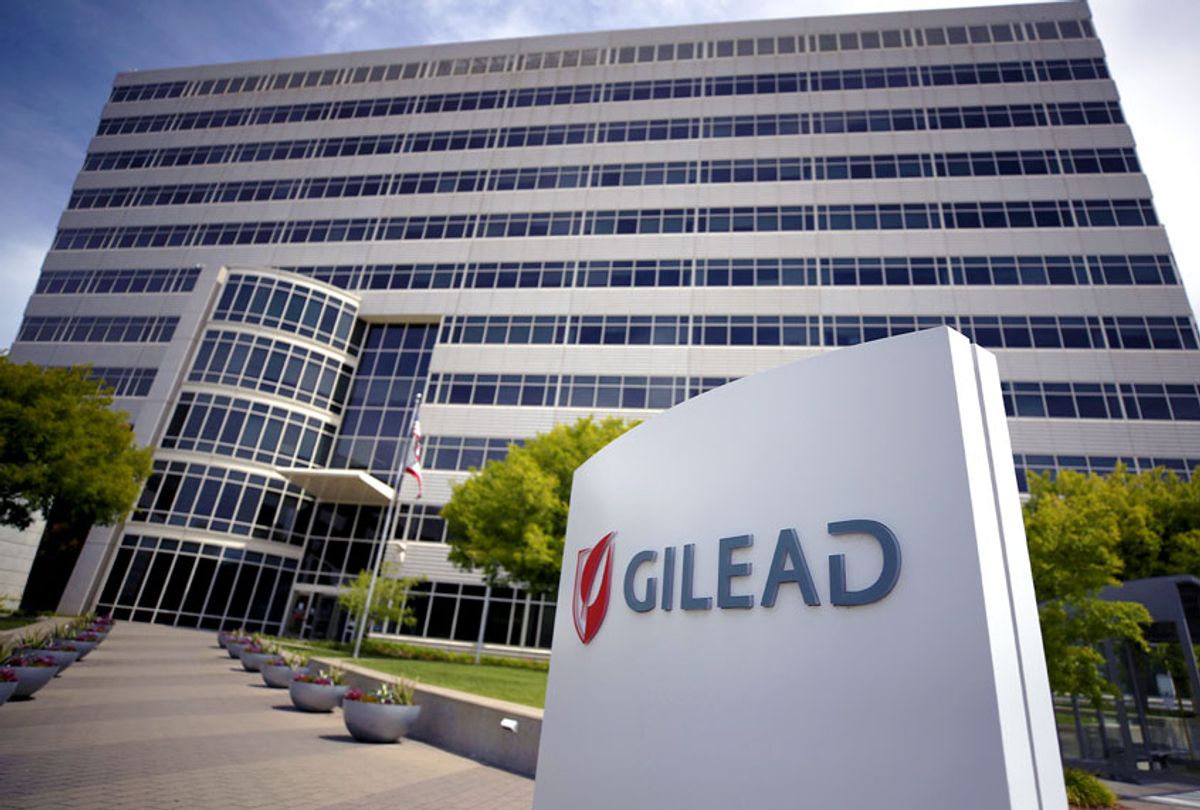 A sign is posted in front of the Gilead Sciences headquarters on April 29, 2020, in Foster City, California. Gilead Sciences announced preliminary results of a drug trial with that showed at least 50% of patients with coronavirus that treated with a five-day dosage of Remdesivir improved and more than half were released from the hospital within two weeks. (Justin Sullivan/Getty Images)
--

Warning of "dangerously low and insufficient" supply projections, a bipartisan coalition of nearly three dozen state attorneys general is urging the Trump administration to end pharmaceutical giant Gilead's monopoly control over Covid-19 treatment remdesivir by authorizing generic production of the drug, which was developed with the support of at least $70 million in taxpayer funding.

"This is not the time for any company to extract large corporate profits from uninsured and underinsured Americans—nor can we allow the individual market priorities and weaknesses of one company to determine the fates of hundreds of thousands of people," the letter reads. "Gilead should not profit from the pandemic and it should be pushed to do more to help more people."

The attorneys general are demanding that the Trump administration immediately exercise its authority under the Bayh-Dole Act, a 1980 law giving the federal government the power to license third-party manufacturers to produce a drug if the patent-holder fails to make the treatment available on "reasonable terms."

"At a minimum," the attorneys general wrote, "we ask that you support states by assigning to states the ability to use the march-in rights under this law to achieve the same purposes."

As Common Dreams reported in June, Gilead is charging U.S. hospitals around $3,120 per privately insured patient for a treatment course of remdesivir—a price tag the attorneys general slammed as "outrageous and unconscionable." Consumer advocacy group Public Citizen estimates that Gilead could have priced remdesivir at $1 per day and still turned a reasonable profit.

"It is unfortunate that Gilead has chosen to place its profit margins over the interests of Americans suffering in this pandemic," the coalition of attorneys general wrote. "Record unemployment and ongoing financial troubles will prevent many Americans from paying for remdesivir. Even for the insured, Gilead's excessive pricing makes copayments and out-of-pocket expenses cost-prohibitive."

Despite the massive infusion of public funding for remdesivir, the attorneys general warned that Gilead remains "unable to guarantee a supply of remdesivir sufficient to alleviate the health and safety needs of the country amid the pandemic."

"Gilead's production projection remains dangerously low and insufficient to handle the current domestic demands, let alone future demands for the antiviral drug," reads the letter, which was signed by attorneys general from Minnesota, Ohio, Utah, Nebraska, and dozens of other states.

Peter Maybarduk, director of the Access to Medicines program at Public Citizen, echoed the demand for an end to Gilead's monopoly on remdesivir production in a statement Tuesday.

"While remdesivir is no kind of pandemic panacea," Maybarduk added, "hospitals should be able to rely on a robust, affordable supply and make choices according to medical need."