Fox News host calls out Kellyanne Conway over Trump's virus misinformation: "Kids are getting this" 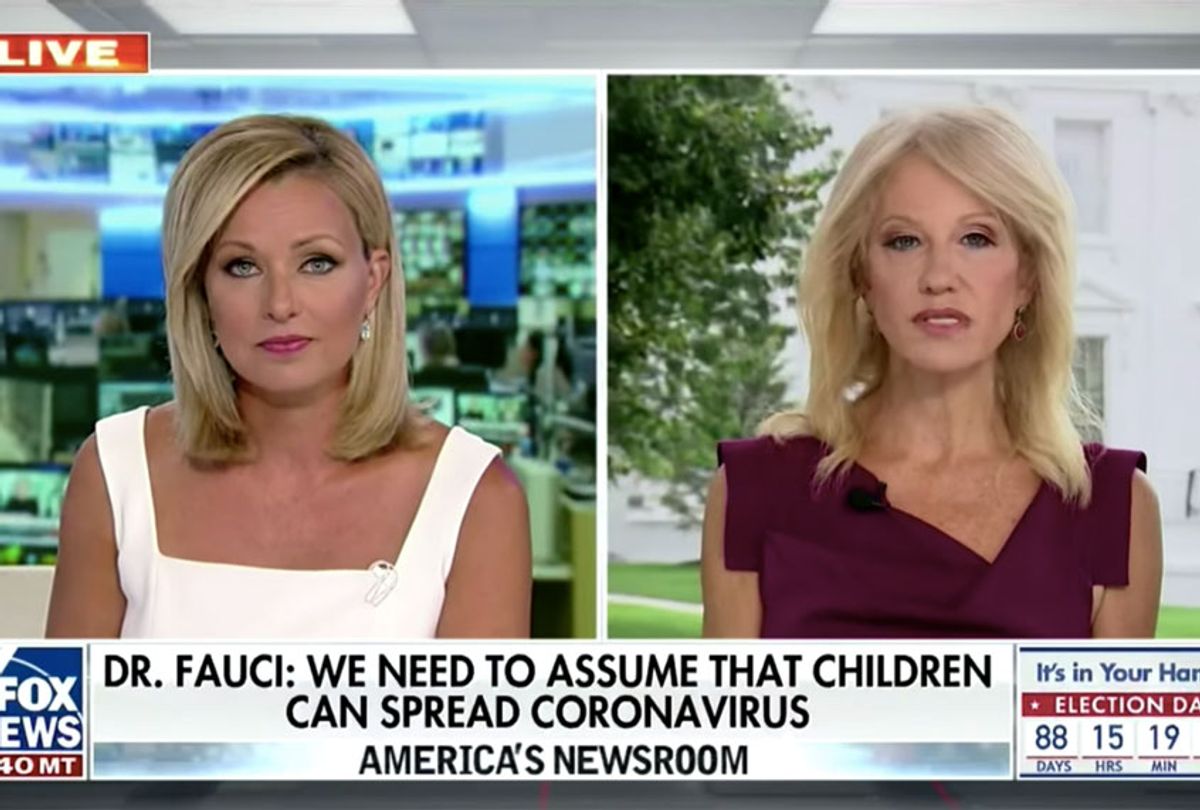 Fox News host Sandra Smith interrupted White House adviser Kellyanne Conway on Thursday while attempting to get answers about President Donald Trump's "misinformation" about the risk of COVID-19 in children.

Smith spoke to Conway following a decision by Facebook and Twitter to take down Trump's postings because of misinformation that claimed children are virtually "immune" from COVID-19.

The Fox News host noted that the Centers for Disease Control has determined that 7.4% of coronavirus cases are people under the age of 18.

"Kids are getting this disease," Smith pointed out.

Conway reacted by insisting that "only one" child had died in New Jersey after becoming infected with COVID-19.

When the White House adviser tried to change the subject, Smith interrupted.

"But I want to stick to children though," Smith said. "The debate right now is over the spread of misinformation by the president about children being nearly immune. Having under 18 kids get this disease 7.4% of the time is not 'nearly immune.'"

The Fox News host reminded Conway that there was an outbreak in Mississippi after schools were opened.

"So is it helpful for the president to tell parents that children are nearly immune from this?" Smith asked. "And then have it factually spreading child to child in places like Mississippi where they've opened the doors to the schools?"

Smith interrupted again: "That's another conversation. The point is, the president in that interview on Fox & Friends yesterday morning said, 'It's going to go away like things go away.' And that is something many people are taking issue with."

"When you have somebody that worked for Kamala Harris come out and announce that you're banning the president's tweet, you're taking it down, that itself shows a political motivation," Conway claimed. "And I think what many of these tech companies are doing now to the president, to conservatives, the shadow banning, the censoring, the selective engagement is election interference."