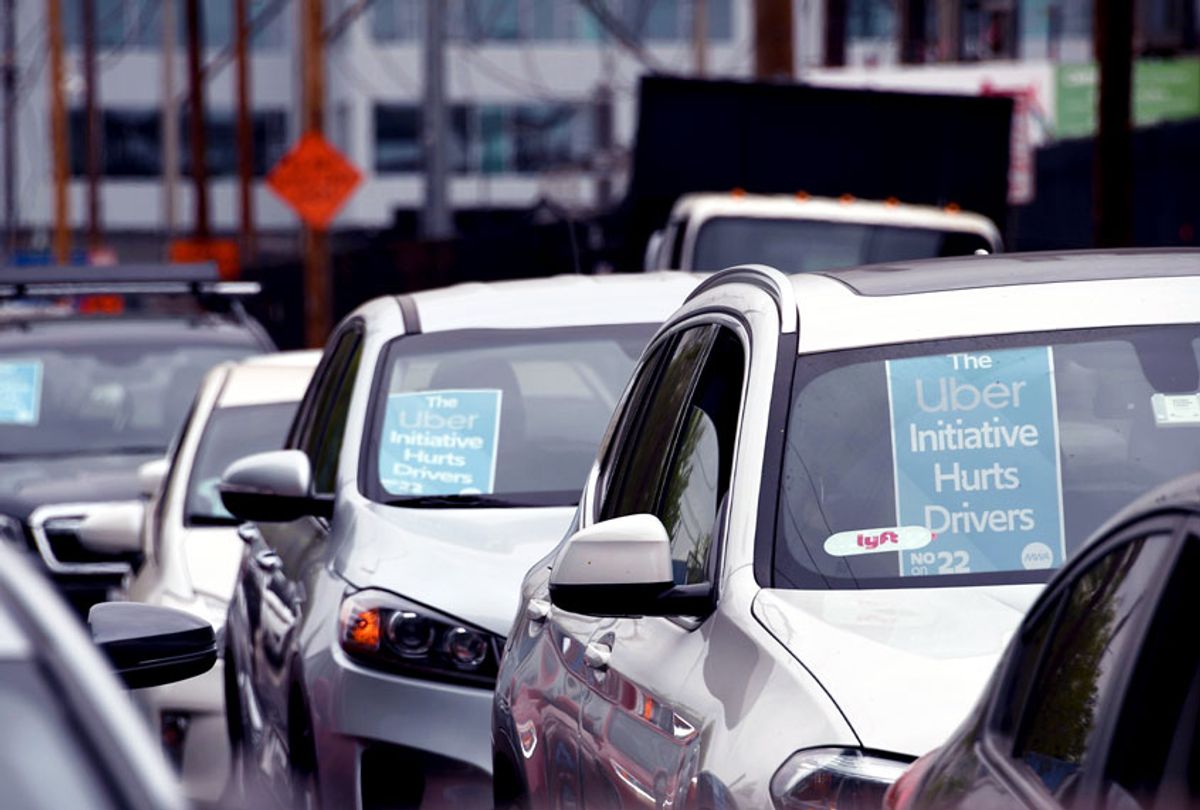 On Thursday, the state of California urged a state judge to issue a preliminary injunction that would require Uber and Lyft to classify their drivers as employees, which they have failed to do despite California legislators passing a law last year that would require them to do so in order to improve the livelihoods of gig workers.

But as officials and lawyers argued in court over the new law, which would make drivers' lives better yet reduce ridesharing corporations' revenues, drivers in support of the injunction gathered in Los Angeles in Oakland for their own hearing, which they dubbed a "people's hearing."

In Oakland, a group of drivers from the organizing groups Gig Workers Rising, Rideshare Drivers United and We Drive Progress held a rally titled to demand the employee status they are legally owed under state law.

"We knew it was also important that we have a people's hearing that involved having an indictment against Lyft and Uber for misclassifying its employees which have denied us basic labor rights, such as unemployment insurance, wages in overtime and protective equipment doing these pandemic times," Cherri Murphy, social justice minister in the East Bay and leader at Gig Workers Rising and Drivers United, told Salon.

Murphy added that driving for Lyft during the pandemic has been especially trying as an independent contractor.

"We have been faced with a choice, a devil's choice, of whether or not we continue to work despite a disease that has the ability to kill us, or we work to ensure that we have housing and enough money to pay our bills," Murphy said.

As Salon has previously reported, many Uber and Lyft drivers haven't received unemployment benefits for obscure reasons — either the state's fault, or Uber and Lyft's fault, depending on one's interpretation as to whether they're employees or independent contractors.

Luz Laguna, a driver for both Uber and Lyft, has had to keep driving during the pandemic because she hasn't received unemployment in California yet.

"You know I'm a single mother of four children, and I've been working through the whole pandemic," Laguna said. "I applied for unemployment, but I still haven't received no benefits, so I'm still working out in the streets working more, like, seven days, eight hours a day, it gets really tired."

Laguna said she applied for unemployment in early March and was denied. Since then, she has applied for the Pandemic Unemployment Assistance program in California, but has yet to receive benefits. California's unemployment benefits have recently been extended for another 20 weeks.

Laguna attended a rally in Los Angeles on Thursday to join fellow drivers and demand justice as employees of Uber and Lyft.

Drivers also protested the Uber and Lyft-funded ballot measure, Proposition 22, which will appear on the November ballot in California. If passed, would exempt these companies from Assembly Bill 5, which currently requires Uber and Lyft to classify their drivers as employees. The astroturf campaign has been said to cost the rideshare giants $110 million, which many drivers have criticized as they struggle to receive even basic support, like personal protective equipment and hand sanitizer, from their employers.

Hector Castellanos, a Bay Area driver for Lyft and Uber and leader with We Drive Progress, told Salon that if Proposition 22 passes in November it will be a major setback for labor rights, and the community at large.

"We're going to keep pushing and pushing, we need to spread the word to everyone that Prop 22 is going to hurt — not just drivers, but taxpayers — it's going to hurt everyone," Castellanos told Salon.

On Wednesday, the California Labor Commissioner announced its plans to sue Uber and Lyft for wage theft and seek to recover unpaid wages for drivers.

"The Uber and Lyft business model rests on the misclassification of drivers as independent contractors," California Labor Commissioner Lilia García-Brower said in a press release. "This leaves workers without protections such as paid sick leave and reimbursement of drivers' expenses, as well as overtime and minimum wages."

Indeed, while workers have support from local legislators and the government labor commission, many of them will keep fighting until justice is served.

"Make no mistake about it, that the stories that were heard today are stories of those who have been denied their basic protections as rideshare drivers," Murphy told Salon. "There will be no peace, until there's justice."