Let's remember that along with everything else, Donald Trump's a total pig

What kind of man was disco-era pals with Jeffrey Epstein and wishes Ghislaine Maxwell "well"? You know what kind 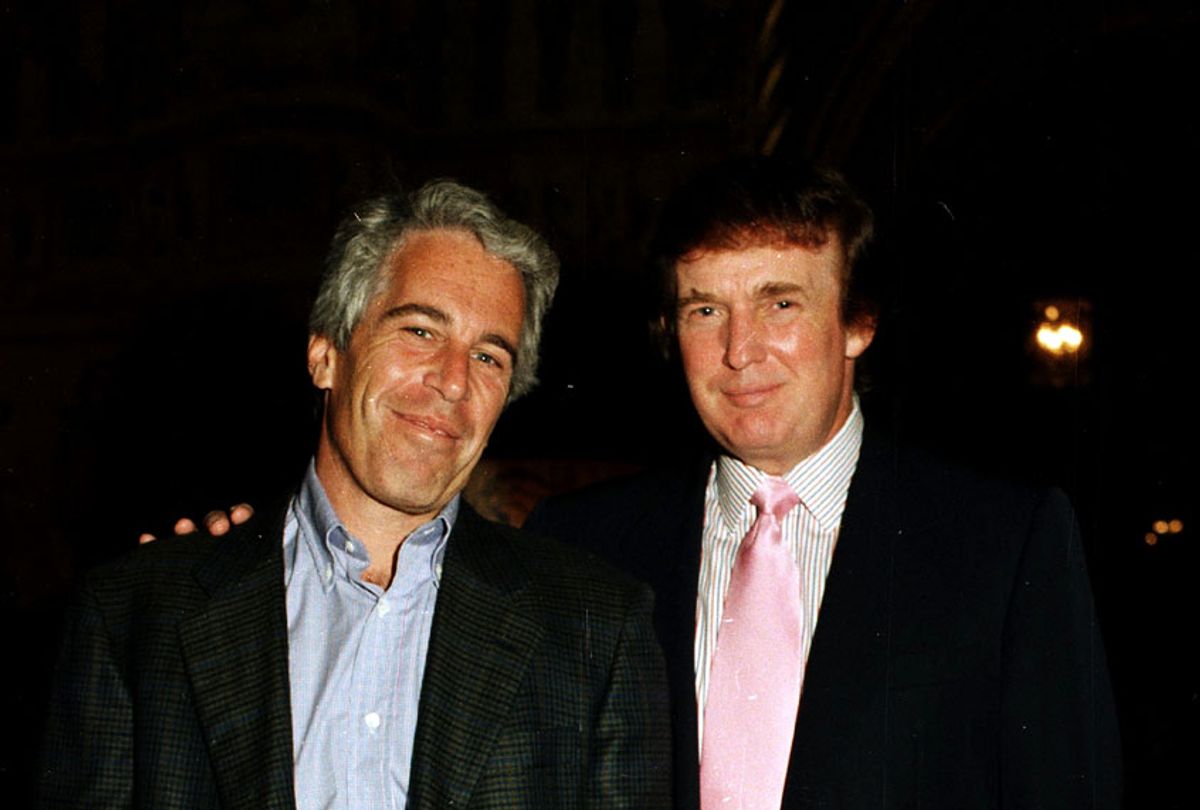 Can we put aside for the moment Trump's corruption, ignorance, incompetence, arrogance, racism, stupidity, criminality, greed and buffoonery, and just deal with the fact that he's a pig? You know what I'm talking about. Look at one of the photographs of Trump and his wife Melania alongside their good friends Jeffrey Epstein and Ghislaine Maxwell, and you've got the whole thing in a proverbial nutshell. I mean, do you have any photographs of yourself with a convicted sex offender and someone accused of procurement in a child sex ring?

Trump does. You've seen them. They've been all over the place, especially after Trump responded to a question at a White House press conference last month about Maxwell's arrest for allegedly procuring, grooming and abusing teenage girls by saying, "I just wish her well, frankly. I've met her numerous times over the years ... I just wish her well, whatever it is."

Think about that. Trump said he was supportive of an accused sex offender the first day he returned to hosting daily coronavirus briefings in the White House after a three-month absence. It was supposed to be a reset for his campaign, a chance for Trump to seize the spotlight and make a stab at getting his poll numbers up.

Hmmm … let's see … I'm down in coal country in Pennsylvania, I'm down in Michigan's Rust Belt," I'm even struggling in Texas, so what's my best move? Oh, I've got it! I'll take the side of a billionaire's daughter who's accused of providing young girls to my good friend Jeffrey Epstein, who committed suicide in a Manhattan jail rather than face federal charges for sex trafficking minors. That's the ticket!

Watch the tape of Trump's press conference. He responded to the reporter's question on automatic pilot. You know why he told the world he wished Ghislaine Maxwell well? Because he knew about what was going on with her and his friend Jeffrey Epstein all along. Because he couldn't help himself. Because he's a pig.

There are reports that Trump's name shows up on the flight manifests of Epstein's private jet (along with Bill Clinton and various other prominent men). Trump himself told New York Magazine in 2002, "I've known Jeff for 15 years. Terrific guy. He's a lot of fun to be with. It is even said that he likes beautiful women as much as I do, and many of them are on the younger side." That means Trump's relationship with Epstein dated back at least until 1987. And 36 years later, in the middle of a campaign for re-election that by all accounts he is currently losing, Trump is still talking nice about Epstein's pimp? He knew. He knew all along.

Think of your own life. Everyone has a circle of friends and acquaintances. You know people at work, you know people from your high school or college days, you know people from your neighborhood. You run into people in bars and restaurants, you see them where you vacation, where you mix socially at cocktail parties or dinner parties or art openings or promotional events. And everyone in your circle of friends knows if one of them is a notorious womanizer or a congenital liar or if somebody has affairs outside his or her marriage or if someone is a real asshole when he's drunk. You know how it goes. Word gets around, and everyone knows.

Now imagine you're a multi-millionaire or even a billionaire, and you're moving through the rarefied air of hotshot New York social circles, and you know a lot of people in that circle of big-timers, and you not only see them at movie premieres and museum fundraisers and charity dinners, you read about them alongside items about yourself on Page Six of the New York Post, they're photographed next to you at fashion shows, you get followed by the same paparazzi who chase them coming out of East Side boites and hot downtown bottle clubs.

Imagine, in other words, that you're Donald Trump, back in the '80s and '90s, when he was chasing fame like it was wearing a tight miniskirt and a pair of thousand-dollar heels. You're so obsessed you call gossip columnists and pretend to be a press agent, and you promote yourself into even more invitations and even more events so you can appear in even more gossip columns and get even more coverage for your fabulous lifestyle, for being seen with the hot babes you're dating or the second wife you're marrying because you're trading up from the tired old first wife you're abandoning because you're moving so fast, you need a newer, faster, sleeker, hotter wife to climb the new, higher heights you're scaling in the accelerating Manhattan fast lane.

There's another rich guy in town, you see him around all the time. He's at the parties, he's at the openings, he's at the fashion shows. You hang out with him. He's a member of your club down in Palm Beach, Mar-a-Lago. You know him well enough to know that he likes his girls "on the younger side." It's kind of a joke in your crowd, that bit about Jeffrey liking them "on the younger side." You have him to a party at your Palm Beach club for 28 "calendar girl" contestants, and there's a camera crew there, and they get a shot of the two of you whispering in each other's ears, watching the girls, pointing out the hot ones, just two dudes doing what dudes do, showing off, cracking each other up, like it's all a game, because you're important enough and you're rich enough and you're well-known enough that you can get these 28 young women to come to your club for some specious event, and you can goof on them with one another like a couple of frat boys at a keg party checking out the chicks. Have a look at this piece of tape from 1992.

Listen to the generic "disco" playing in the background. Check out Epstein's "cool" denim shirt and Trump's pink tie and his "hip" bopping to the hideous music. You know what you're watching? You're watching a couple of pigs.

Jeffrey Epstein? He's going to turn into an indicted and convicted pig who gets indicted again and kills himself rather than face a wagon-load of charges that he trafficked and sexually abused dozens of teenage girls for a long, long time.

And Donald Trump? He's going to turn into an impeached pig who brags about grabbing women "by the pussy," who pays hush money during his first campaign for president to at least two women to cover up affairs he was having outside his marriage, who is accused by more than two dozen women of various kinds of sexual harassment and abuse over a period of decades, who becomes known for his antipathy for strong women in politics because he simply cannot stomach women who stand up to him and refuse to take his misogyny and racism.

If all Trump ever did in his life was to be friends with the likes of Jeffrey Epstein and Ghislaine Maxwell, that would be reason enough to consign him to the sixth ring of some kind of hell we haven't even imagined yet. At the very least, he knew who they were and he knew the disgusting, illegal stuff they were doing with little girls. And you know what kind of man that is?