How a mind-controlling, sexually transmitted fungus turns cicadas into "zombies" 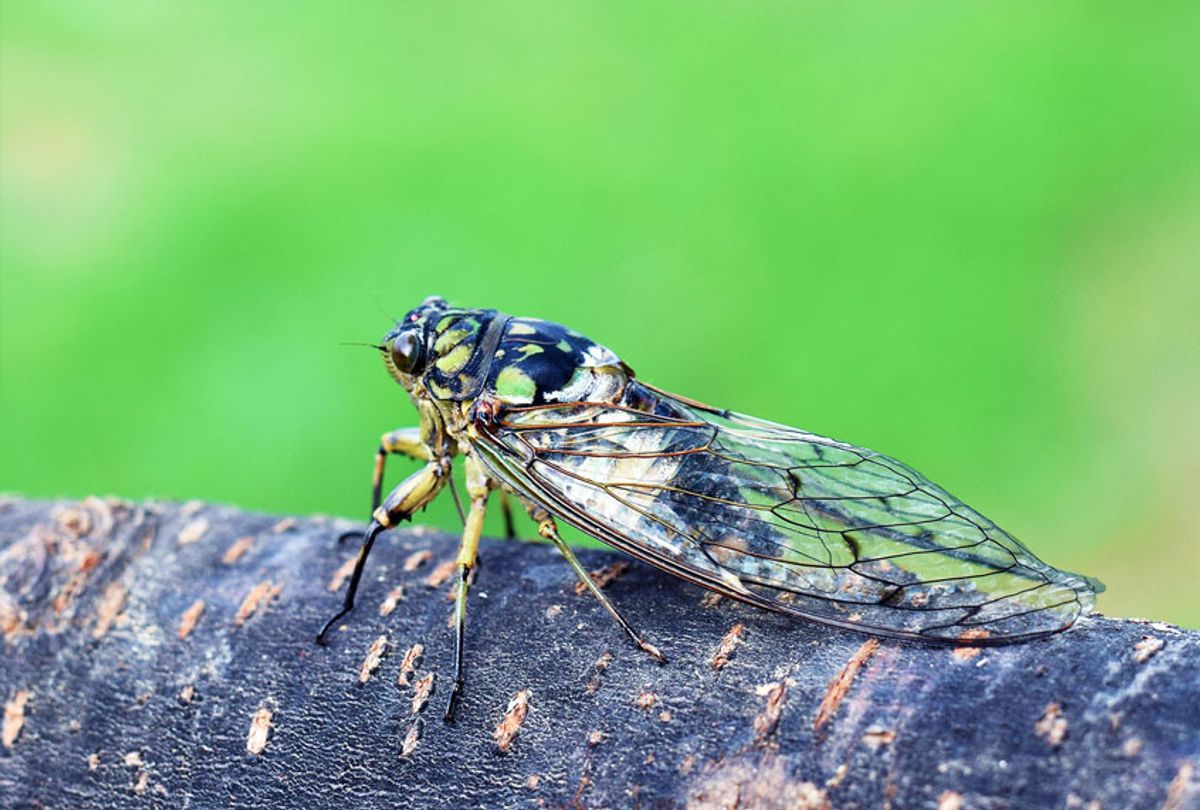 Close-Up Of Cicada On A Tree (Getty Images)
--

A new study reveals that male cicadas, when infected with a mind-controlling fungus that devours large parts of their bodies, will trick other male cicadas into being infested by the same horrifying parasite — thanks in part to a psychoactive chemical found in hallucinogenic mushrooms.

One of the chemicals in this fungus is psilocybin, the psychoactive that causes humans to "trip" when they consume psychedelic mushrooms. Intriguingly, scientists believe that in infected cicadas, this drug may actually help the cicada endure the trauma of having the lower half of its bottom replaced by said fungus while the upper half decays. This is important, as the fungus starts "pulling the behavioral levers" of the cicada through various chemical interactions with the insect's biology.

The researchers, including lead study author Brian Lovett from the Division of Plant and Soil Sciences at West Virginia University, describe how the fungus Massospora is able to engage in active host transmission, a process in which a pathogen uses "a form of biological puppetry" to manipulate one living host in order to transfer its material to another living host. This is why they are colloquially referred to as "zombie cicadas," both in the classical definition of that term (a dead or hypnotized being whose mind is controlled by another) and the contemporary cinematic one (a body that is literally decaying but continues to move around).

"Manipulation of a host to focus on pathogen transmission is fascinating, because it raises questions about the nature of autonomy and shines a light on the physical and behavioral manifestations of parasitism," the study, which was published in the journal PLOS Pathogens, says.

Salon reached out to Lovett to learn more about what this study suggests about the nature of free will in both insects and humans.

"We wouldn't claim to know what these cicadas are feeling or thinking during infection, but it's certainly tempting to empathize: how horrified would you be to discover that a sizable part of your body has been replaced by a fungus?" Lovett said by email. "What we can do is look at how some of the interesting compounds these fungi produce may affect the behavior of their cicada victims."

When describing periodical cicadas, Lovett observed that "an amphetamine (cathinone) is produced. This drug certainly changes our mood and behavior, and it has been shown to alter aggression and feeding in other insects. We speculate these fungal drugs may help cicadas endure the trauma of having their abdomen replaced by fungus, as they continue to spread its spores."

I asked Lovett if his research suggests that a similarly mind-controlling organism could rob human beings of their free will. Lovett laughed and replied, "I do not see a fungus evolving to replace our butts anytime soon. Modern medicine and pants prevent that from becoming a winning fungal lifestyle. However, there are already examples of parasites that manipulate our mood and behavior. In our PLOS Pathogens article, we highlight rabies as a pathogen that changes who we are to the benefit of the virus."

Indeed, humans who suffer rabies experience hydrophobia and difficulty swallowing, which lets the virus build up in the victims'  mouth. They also become more aggressive, and in animal cases, will bite others, thus spreading the virus. In other words, rabies is a good example of a virus altering mammals' behavior in the virus' favor.

Massospora also has the dubious distinction of being the only known example of active host transmission in which "the pathogen behaves at least in part as a sexually transmitted disease, although natural history studies are lacking." Massospora often infects cicadas from the Magicicada genus, also known as periodical cicadas, which includes seven species that are known to spend either 13 or 17 years underground as nymphs before emerging for a few weeks to mate and die.

To find a partner, cicadas from this genus will practice "highly stereotyped" behavior in which "males call and females respond with wing flicks, but healthy males never signal with wing flicks. When females remain unmated much beyond the onset of sexual receptivity, their responses become exaggerated with louder, more consistent wing flicks and sometimes even whole-body motions that appear to draw the attention of chorusing males."

This is where Massospora enters the picture. The spores will force the zombified cicadas to move their wings in a way that other males of the species will associate with females seeking to mate. Once the unsuspecting male approaches the supposed female, the spores will be able to infect the new host. Instead of being able to mate with other cicadas and lay eggs before dying, the zombie cicadas are manipulated by the fungus to fly around so they can spread more spores.

In a visceral passage on why the term "zombie cicada" is visually appropriate, Nature's Scientific Reports wrote in 2018 that after copulation it is not uncommon "to see healthy cicadas attached to fragments of abdomen or terminalia that have torn free from infected partners during attempted copulation."