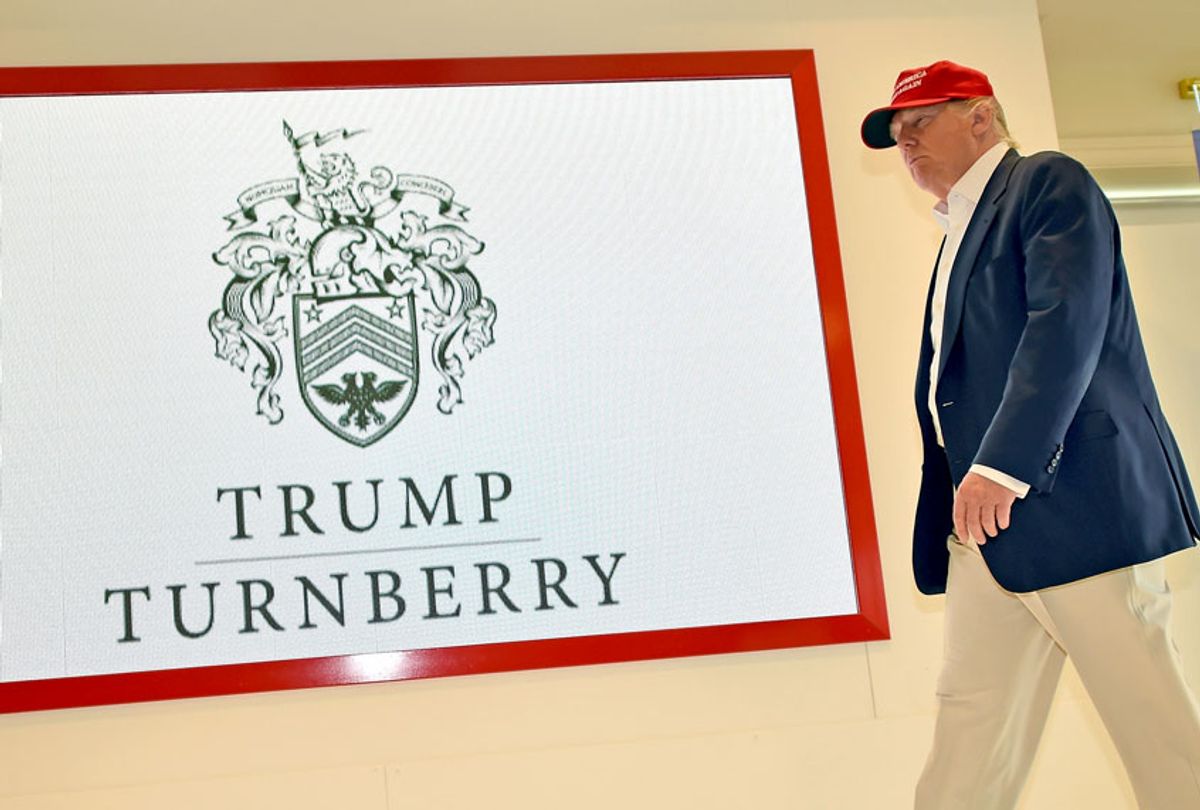 President Donald Trump filed "fraudulent" documents to the U.S. government inflating the value of his golf clubs in Ireland and Scotland, according to a left-leaning government watchdog group.

The American Democracy Legal Fund called on Manhattan District Attorney Cy Vance and the FBI to investigate whether Trump broke the law by filing false financial disclosure documents, according to a letter obtained by Politico.

Trump reported to the U.S. government that his Trump International Golf Links Aberdeen and Trump Turnberry resorts in Scotland and the Trump Doonbeg in Ireland earned about $179 million in revenue between 2014 and 2018, according to research compiled by the group. Documents from the U.K. and Ireland show significantly less revenue — around $152 million — and the resorts actually lost $77 million over that time frame when expenses are included.

Trump reported to the U.S. government in 2018 that the two Scottish resorts were worth at least $100 million, but records from the U.K. show the resorts actually had about $80 million more debt than assets.

"The Trump Organization repeatedly reported fraudulent financial details to the U.S. Office of Government Ethics, while reporting a different set of numbers to U.K. and Irish regulators," Brad Woodhouse, a longtime Democratic Party operative and president of the American Democracy Legal Fund, said in the letter to Vance. "If the Trump Organization has seen fit to fake this information to federal agencies, it is likely they have used falsified information in business dealings regarding these courses."

After a win in the Supreme Court case over whether he can subpoena Trump's tax returns, Vance's office told a judge this month that it was investigating "public reports of possibly extensive and protracted criminal conduct at the Trump Organization," including bank and insurance fraud.

Vance, who already subpoenaed and obtained documents from Deutsche Bank, which has been Trump's primary lender for 20 years after other mainstream banks refused to do business with him following a series of bankruptcies and defaults, is seeking to obtain years of Trump's tax returns as part of the investigation.

"It was my experience that Mr. Trump inflated his total assets when it served his purposes, such as trying to be listed amongst the wealthiest people in Forbes, and deflated his assets to reduce his real estate taxes," Cohen said.

Former Forbes reporter Jonathan Greenberg revealed in 2018 that Trump had even disguised himself as "John Barron" to convince the magazine to include him on its list of wealthiest Americans.

The Trump Organization and the White House did not comment on the Politico report, but an administration official told the outlet that officials at the Office of Government Ethics do not fact-check financial disclosures. The report noted that Trump was required to report his assets and income on the disclosures but "always appears to list his company's revenue instead, not taking into account expenses or debt, allowing him to hide his company's losses and his actual income."

Kathleen Clark, an ethics expert at the Washington University School of Law, told the outlet, the allegation "raises flags" and "begs for an investigation."