After impeachment, everyone knows Trump intends to steal the election — so the USPS scandal is sparking outrage 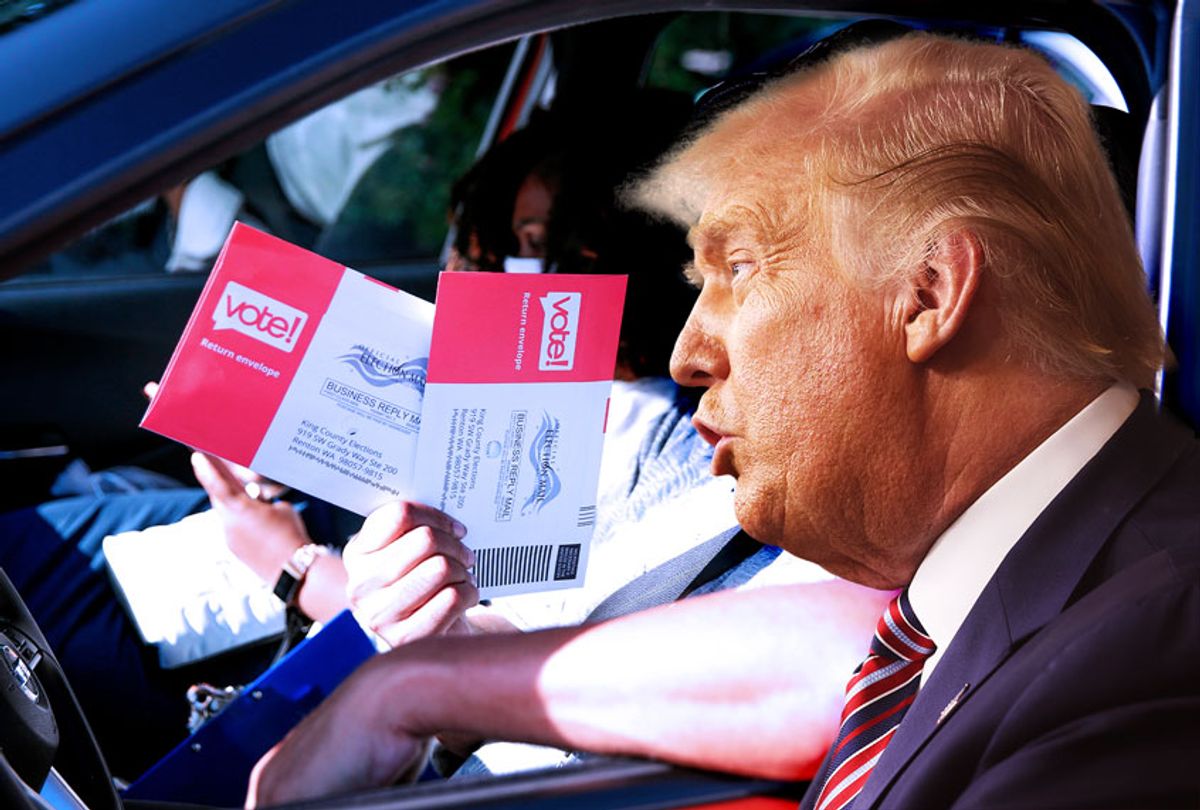 One could have been forgiven, for a hot minute there, for worrying that Donald Trump would be successful at keeping his scheme to steal the 2020 election by destroying the U.S. Postal Service under the radar. There was a real chance this scandal would be drowned out by the dozens of other Trump scandals that fight for headline space at any given moment. Considering that voter suppression has been a longstanding GOP habit, one that's never been sexy enough to garner much interest outside political junkie circles, the campaign against the post office might not even have rate as a medium-level Trump conspiracy.

Even the fact that Trump confessed on live TV to the conspiracy was no guarantee that the story wouldn't sink beneath the waves. On the contrary, Trump often uses confessions to make scandals disappear, relying on people's assumption that his criminality and corruption can't be that big a deal if he's so open about it.

Over the weekend, however, there were strong signs that the USPS scandal was not, in fact, going to just go away. News that the Postal Service warned the majority of states about serious delays in service was broadly reported. Speaker Nancy Pelosi pulled back House members back from their summer recess to vote on legislation to protect the USPS, and the House scheduled a hearing for Aug. 24 featuring Postmaster General Louis DeJoy and Postal Service Board of Governors chairman Robert M. Duncan, although it's entirely likely they'll follow the lead of other Trump appointees in the past and simply ignore a summons from Congress.

Perhaps more importantly, the story of post-office sabotage has penetrated public consciousness. Photos of trucks hauling away mailboxes went viral. Stories about mail sorting machines being decommissioned were shared widely, and when White House chief of staff Mark Meadows went on CNN to issue denials — which have no weight, since the Trump White House lies about everything — Jake Tapper pushed back, hard.

So yes, it seems that both the media and the public are aware of Trump's attempts to steal the election, and have so far avoided that trap of imagining that it can't be that bad or that liberals are just being hysterical.

For that, we can thank the House impeachment of Trump back in December. Remember, that was about his abuses of presidential power in his scheme to cheat in the election by extorting the Ukrainian president into publicly lending support to a ridiculous conspiracy theory about Trump's Democratic opponent, former Vice President Joe Biden.

Yes, he was technically acquitted by the Republican-controlled Senate, but it's unlikely there's a single soul in this country that actually mistakes that vote for an assertion that Trump is innocent. On the contrary, the evidence of Trump's guilt that was brought to bear was overwhelming, and the acquittal was really more a demonstration of the widespread Republican embrace of cheating in service of winning elections.

In other words, the sustained attention to the Ukraine scandal made one thing absolutely clear: Trump has no compunction about cheating to win in 2020. Because of that, the media no longer operates under any compulsion to give this president the benefit of the doubt. His critics no longer need to prove that Trump is both eager to cheat and willing to bend or break the law to do it. That is now indisputable.

So when stories started to emerge that Trump was slowing down the mail to keep ballots from being counted, it wasn't bogged down by hand-wringing debate over whether Trump is capable of such devious and authoritarian behavior. And when Trump confessed on Fox Business to slow-walking post office funding so that he could steal the election, there wasn't the usual parsing over whether or not he actually said the thing he clearly said.

That Trump is a cheater is indisputable, and that has emboldened both journalists and leading Democrats to speak bluntly about this latest scandal without fear of being accused of overreacting. The Biden campaign, for instance, appears to be taking Trump's effort to steal the election very seriously and is moving to educate voters on their need to vote early, to prevent ballots from getting "lost" in the mail.

Even former President Barack Obama, who generally tries to stay out of the fray of day-to-day politics, spoke out about Trump's war on voting, denouncing Trump for trying to "to actively kneecap the Postal Service" and otherwise discourage voting at all.

Trump was able to coast for years on this implicit assumption that the office of the presidency somehow ennobles the occupant, and that it was therefore unfair to assume the president is a liar and a cheat just because his entire career before he became president was based on lying, cheating and defrauding people. Impeachment ended that presumption of good faith, by making abundantly clear that not only was Trump willing to "accept" cheating on his behalf, as he did with Russian election interference in 2016, but he actively sought out opportunities to cheat and actively participated in them.

So it's simply wrong to say the impeachment of Trump failed because the Senate acquitted him. The whole ordeal completely changed the national discussion around Trump's corruption. The question is no longer about whether Trump is corrupt, but more about whether or not voters care about that. Now that his corruption is threatening their ability not just to vote but to receive all the things ordinary people get by mail, there's good reason to believe it will finally come back to bite him.