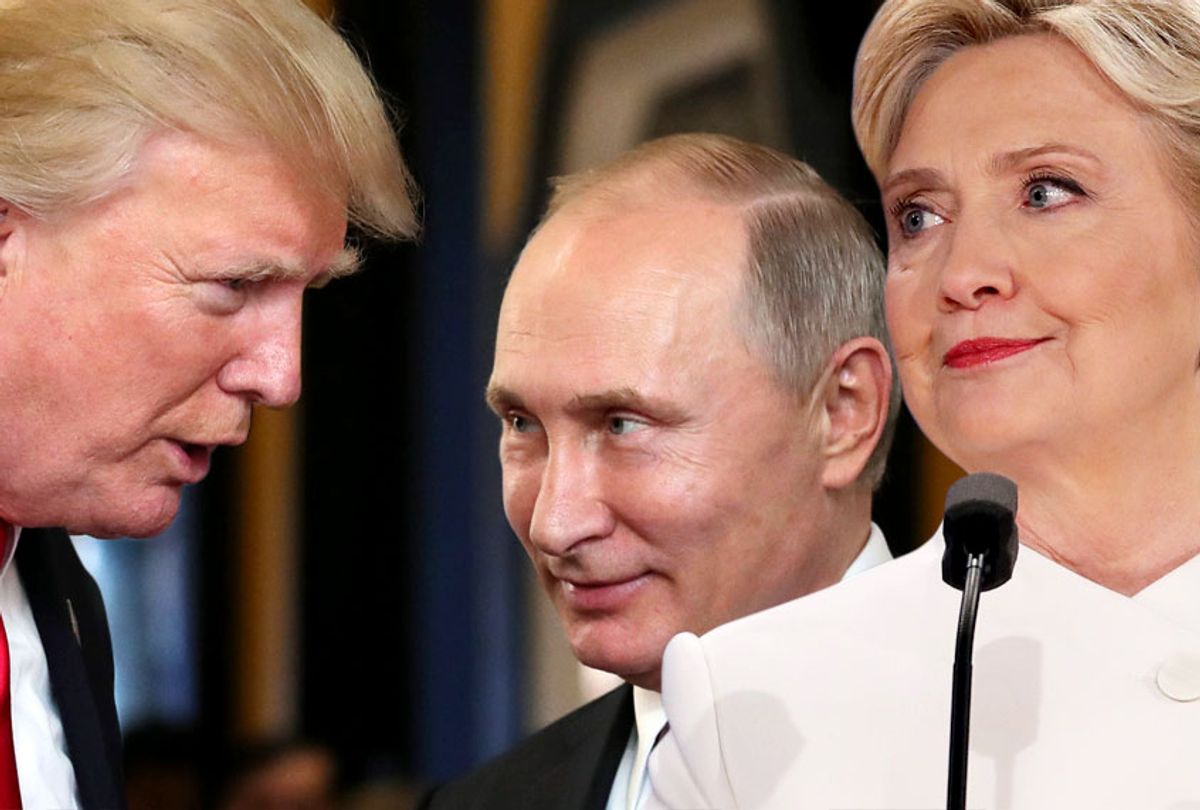 Long after any debate about whether President Donald Trump's ties to Russia's 2016 election interference might lead to his impeachment had fizzled out, the Senate Intelligence Committee dropped a bomb of a report on Tuesday including explosive new details of the sordid affair.

While the new report doesn't completely upend the story of the 2016 campaign as we knew it — much of the outline of the conduct was contained in former Special Counsel Robert Mueller's report and previous news articles — it highlights new details and facts that emphasize the duplicity going on behind the scenes. It completely undermines the notion, pushed by the president and attorney general, that there was no basis for the investigation and shows there is ample evidence for what was once widely discussed as "collusion." And this is particularly significant because the report was developed by a committee led by Republicans — they can't be painted as enemies of the president, as Mueller's team was.

Here are seven of the most striking details from the new report:

Among the most explosive allegations in the Mueller report were the ties between Manafort, Trump's campaign manager for the summer of 2016, and Russia. In particular, he had a series of contacts and meetings with Konstantin Kilimnik, who was known to have a past with Russian intelligence.

But the committee's report is much more explicit about Kilimnik's role:

Manafort hired and worked increasingly closely with a Russian national, Konstantin Kilimnik. Kilimnik is a Russian intelligence officer. Kilimnik became an integral part of Manafort's operations in Ukraine and Russia, serving as Manafort's primary liaison to Deripaska and eventually managing Manafort's office in Kyiv. Kilimnik and Manafort formed a close and lasting relationship that endured to the 2016 U.S. elections and beyond. [emphasis added]

And it noted: "On August 18, 2016, Kilimnik told a journalist in private that he had 'almost daily contacts with Manafort these days on this 'Ukraine crisis.'"

2. Kilimnik and Manafort are even potentially tied to the criminal hacking of Democratic emails.

Kilimnik's links to Russian intelligence and Mueller's finding that Manafort shared internal campaign data with him were some of the most explosive revelations in the entire scandal. And the Senate report makes those findings even more inflammatory by tying Kilimnik to the hack-and-leak operation, the most significant aspect of the Russian attack on 2016:

Some evidence suggests Kilimnik may be connected to the GRU hack-and-leak operation related to the 2016 U.S. election. This assessment is based on a body of fragmentary information.

The information that follows is redacted.

The report also says: "Two pieces of information, however, raise the possibility of Manafort's potential connection to the hack-and-leak operations." What follows is redacted.

3. Trump discussed WikiLeaks with Stone during his 2016 campaign

In written responses during Mueller's investigation, Trump denied recalling having communications with Roger Stone about WikiLeaks's leaking of the hacked Democratic emails in 2016. A lot of evidence already suggested that was false and that Trump likely lied to Mueller about it — which would be a crime.

The Senate report lays out the contradiction clearly:

Trump, in written responses to the SCO, stated: "I do not recall discussing WikiLeaks with [Stone], nor do I recall being aware of Mr. Stone having discussed WikiLeaks. with individuals associated with my campaign."1624 Trump further claimed that he had "no recollection of the specifics of any conversations I had with Mr. Stone between June 1, 2016 and November 8, 2016."1625 Despite Trump's recollection, the Committee ass~sses that Trump did, in fact, speak with Stone about WikiLeaks and with members of his Campaign about Stone's access to WikiLeaks on multiple occasions.

"Damning," said Lawfare's Quinta Jurecic, "especially in light of newly unredacted material from the Mueller report that suggests Mueller also thought Trump had lied to him about conversations re Wikileaks."

On Sunday July 31, at 9:15 p.m., the day after speaking at length with Manafort, Stone called Gates. Ten minutes later, Stone had two phone calls with Trump that lasted over ten minutes. Stone then emailed Jessica Macchia, one of Trump's assistants, eight draft tweets for Trump, under the subject line "Tweets Mr. Trump requested last night."1552 Many of the draft tweets attacked Clinton for her adversarial posture toward Russia and mentioned a new peace deal with Putin, such as "I want a new detente with Russia under Putin."

Politico's Natasha Bertrand noted that Stone was suggesting these tweets even while he was trying to act as a conduit between the campaign and WikiLeaks.

5. Stone wanted WikiLeaks to drop new hacked emails after the Access Hollywood tape went live — and it did.

At approximately 4 p.m. on October 7, The Washington Post released the Access Hollywood tape. Witnesses involved in Trump's debate preparation recalled that the team first heard of the tape about an hour prior to its public release. According to Jerome Corsi, however, news of the release also made its way to Roger Stone. Corsi and Stone spoke twice that day at length: once at 1:42 p.m. for 18 minutes, and once at 2:18 p.m. for 21 minutes. Corsi recalled learning from Stone that the Access Hollywood tape would be coming out, and that Stone "[w]anted the Podesta stuff to balance the news cycle" either "right then or at least coincident." According to Corsi, Stone also told him to have WikiLeaks "drop the Podesta emails immediately."

Corsi recalled previewing the Access Hollywood tape with conference call participants during one or two calls that day: a WorldNetDaily staff call at 1 :08 p.m., or a 2 p.m. call involving Total Banking Solutions that included Malloch. Corsi remembered telling conference participants that the tape was a problem and to contact Assange. Corsi then "watched all day to see what Assap.ge would do," and when the Podesta emails were released, he thought to himself that Malloch "had finally got to Assange."However, Corsi later told investigators that he did,not call Malloch or Stone after the WikiLeaks release to convey this reaction because, in contradiction to his earlier statements, he was "doubtful" that Malloch had succeeded.

After the Podesta emails were released on October 7, 2016, Trump and senior Campaign officials acknowledged internally and to Stone that Stone had predicted the WikiLeaks release about Podesta.

6. Kilimnik helped push the story that Ukraine intervened in 2016, but the committee found no evidence to support that view.

The Committee observed numerous Russian-government actors from late 2016 until at ;east January 2020 consistently spreading overlapping false narratives which sought to discredit investigations into Russian interference in the 2016 U.S. elections and spread false information about the events of 2016. Manafort, Kilimnik, Deripaska, and others associated with Deripaska participated in these influence operations. As part of these efforts, Manafort and Kilimnik both sought to promote the narrative that Ukraine, not Russia, had interfered in the 2016 U.s: election and that the "ledger" naming payments to Manafort was fake.

Kilimnik appeared to be under the impression that Trump believed that Ukraine interfered. Kilimnik made this statement in a private email with a journalist, making the accuracy of the statement is difficult to assess. The Committee's efforts focused on investigating Russian interference in the 2016 election. However, during the course of the investigation, the Committee identified no reliable evidence that the Ukrainian government interfered in the 2016 U.S. election.

Fiona Hill, Trump's former White House aide specializing in Russian affairs, famously called the Ukraine allegations a "fictional narrative that has been perpetrated and propagated by the Russian security services themselves."

7. The committee believed that WikiLeaks was actively collaborating with Russia, despite its claims to the contrary.

"Although WikiLeaks seeks to portray itself as a legitimate media organization, its disclosures have jeopardized the safety and privacy of individual Americans and foreign allies because WikiLeaks has made only minimal, and sometimes no efforts to redact sensitive information, and does not seem to weigh whether its disclosures add any public interest value," the report noted.

And then, in one heavily redacted section, the report leaves one sentence uncovered: "However, the Committee found significant evidence to suggest that, in the summer of 2016, WikiLeaks was knowingly collaborating with Russian government officials."