Trump is betting his future on a simple belief: White people are still deeply racist. Will America prove him wrong? 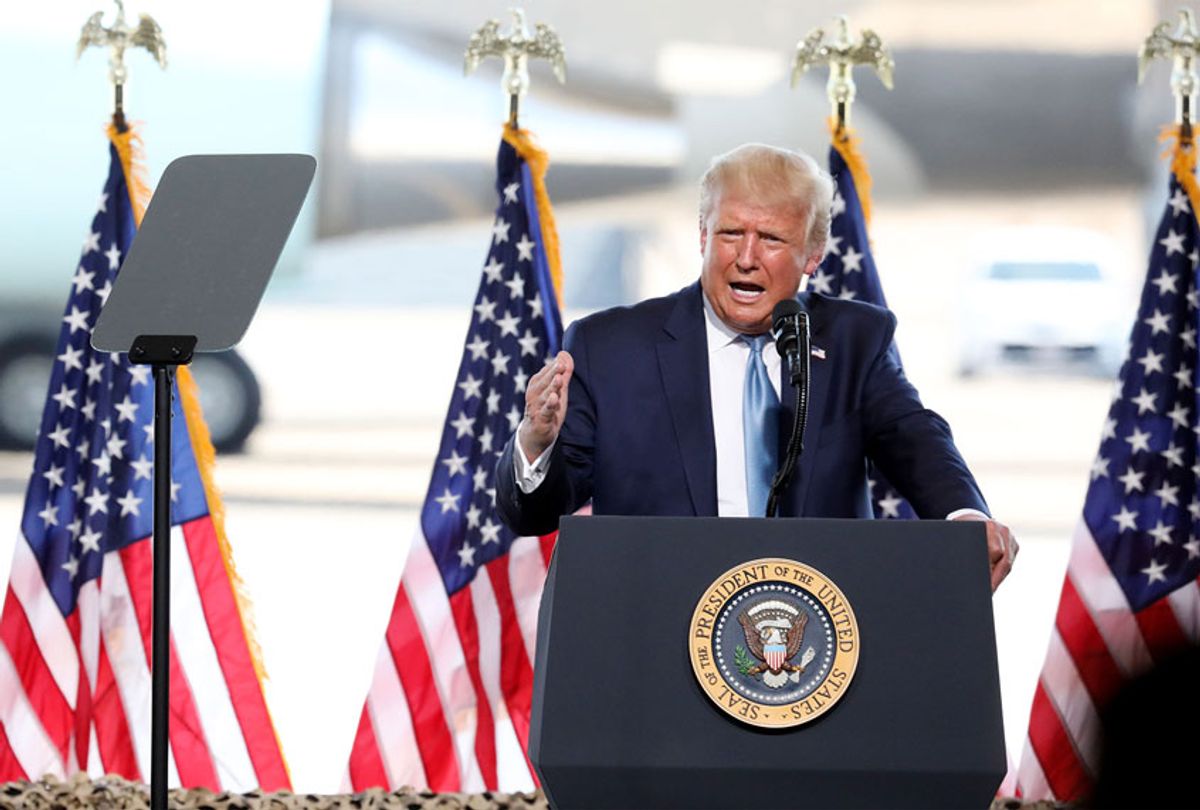 Not that this should come as a surprise, but with the Republican National Convention less than a week away, Donald Trump is sending every possible signal that whatever its official themes may be the GOP gathering's true subject will be white grievance politics. Unlike in the past, where concerns about not appearing overtly racist have forced Republicans to resort to dog whistles and coded language, Trump seems to believe to that his best bet is to serve the racism straight up, thereby vanquishing any remaining doubts about whether our president is actually a white supremacist.

Late Tuesday night, Trump praised Laura Loomer, who won the Republican primary in Florida's 21st congressional district, which is Trump's official place of residence. To call Loomer a "far right" or "fringe" candidate is understating the case. She's an obsessive bigot with a long history of unvarnished hatred of Muslims — or anyone she just suspects may be a Muslim — calling them "savages" and labeling herself a #ProudIslamophobe. Her rhetoric is openly genocidal, such as when she declared that "we should never let another Muslim into the civilized world" and urged taxi and ride-share companies not to hire Muslim drivers. (It may be reassuring to know that she almost certainly won't win in November. The district is solidly Democratic, and Republicans didn't even bother to run a candidate against incumbent Rep. Lois Frankel in 2018.)

Loomer has been banned by both Uber and Lyft for this overt bigotry, and then was banned from Twitter after tweeting about Rep. Ilhan Omar, the Minnesota Democrat who is one of two Muslim women in the House: "Ilhan is pro Sharia Ilhan is pro-FGM Under Sharia, homosexuals are oppressed & killed. Women are abused & forced to wear the hijab."

In actual reality, Omar is pro-choice and supports LGBTQ rights, and has condemned "religious fundamentalists" who wish "to impose their beliefs on an entire society." But of course Loomer doesn't actually care about religious freedom. She feigns concern for it in order to accuse Omar and all other Muslims of being anti-American.

Trump's celebration of Loomer's win comes not long after his enthusiastic Twitter embrace of Marjorie Taylor Greene, who won a Republican House primary in Georgia despite being a QAnon supporter who has wallowed in wildly racist rhetoric and anti-Semitic conspiracy theories. It's more likely, of course, that Greene won because of those things.

These tweets are building on a summer of Trump digging his heels in on the idea that going all-in on open racism is the key to winning the election in November. He has repeatedly insisted that the way to win over "Suburban Housewives" is to scare them with threats that people of color will move into their neighborhood and ruin the "suburban lifestyle dream." (Trump seems to have no idea that most women who live in suburbs work outside of the home, let alone that not all of them are married or heterosexual.)

And of course Trump decided to go big with racist attacks on Sen. Kamala Harris of California, who was recently chosen as Joe Biden's running mate, claiming that he had "heard" that she "doesn't meet the requirements" to be vice president.

A number of outlets dutifully ran pieces debunking the elaborate legal "theories" (scare quotes because they're more like what-if word games than theories) which posit that Harris — who was born in Oakland, California — is somehow not a "natural born Citizen" as required by the Constitution. (Of course she is, and that legal question has been settled since at least 1898, however much right-wing legal beagles wish to gnaw at it.)

But in a sense, that misses the point. By applying the same "birther" conspiracy theory to Harris that Trump used for years against Barack Obama, Trump is making clear that this has nothing to do with legitimate confusion over who is and isn't a U.S. citizen. It's just a backdoor method for Trump and his supporters to deny that Black people or the children of immigrants are real Americans, and to imply that the only legitimate contenders for the White House are white people.

Now the Republican convention appears to be committed to foregrounding the theme that the "real" victims of racism and bigotry are not Black people killed or abused by police or Latinos targeted for harassment by ICE or Asian-Americans subjected to hate crimes after Trump and his allies began to use racist terms for the coronavirus, but rather white people who are unfairly victimized by being called racist.

Consider that among the RNC speakers we find Patricia and Mark McCloskey, the St. Louis couple who became the target of widespread online mockery after they reacted to Black Lives Matter protesters walking down the public street in front of their house by pulling out guns and threatening the protesters. Since then, the McCloskeys have been heavily featured on the right-wing victim-complex media circuit, portraying themselves as the victims of censorious liberals even though they were blatantly trying to shut down free speech with threats of lethal violence.

The McCloskeys will be at the convention alongside Nicholas Sandmann, a high school student who has a somewhat better claim to the idea that he was unfairly portrayed in the media after he and his fellow MAGA-hat-clad anti-choice activists got into a conflict last year on the streets of Washington with some progressive activists who were demanding rights for Native Americans. Video of the event showed that neither the MAGA kids nor the Native American protesters started the conflict — that credit goes to a group of Black Hebrew Israelites, an anti-Semitic fringe group loathed across the political spectrum — and the right was able to leverage the ambiguity of the situation to spin a simplistic tale about innocent young conservatives being falsely accused of racism.

But no matter how ambiguous Sandmann's situation may have been, the McCloskey situation was not: These were a couple of nutty white people who harassed and threatened peaceful protesters for the "crime" of walking down a public street. The conflation of the two cases shows that Trump isn't actually interested in the guilt or innocence of anyone accused of racist actions. This is about stoking white grievance about the fact that racism is even treated as a social scourge in the first place.

Will this work? It's tough to say, but there are reasons to hope it won't. Trump himself is just going with straightforward racism on his Twitter feed and in his public statements, but the RNC is playing a slightly subtler game, seeking to prey on white people's fears about being called "racist" while not quite claiming that racism is actually OK.

Most Americans already believe that Trump is a racist, and aren't happy about it. There's really no evidence for Trump's theory that there's a "silent majority" of Americans who feel oppressed by the anti-racist elite, which seems rooted in beliefs of past decades. On some level, even Trump seems to grasp that, which is why his real strategy — as Democratic insider Simon Rosenberg recently told Salon's Chauncey DeVega — is not to win over enough voters to win a fair election so much as to rig the results by destroying the Postal Service and delaying mail-in ballots so they won't count. But even if he loses, Trump's strategy of empowering and enabling overt racism will leave a dark stain on this country that may take many years to scrub out.