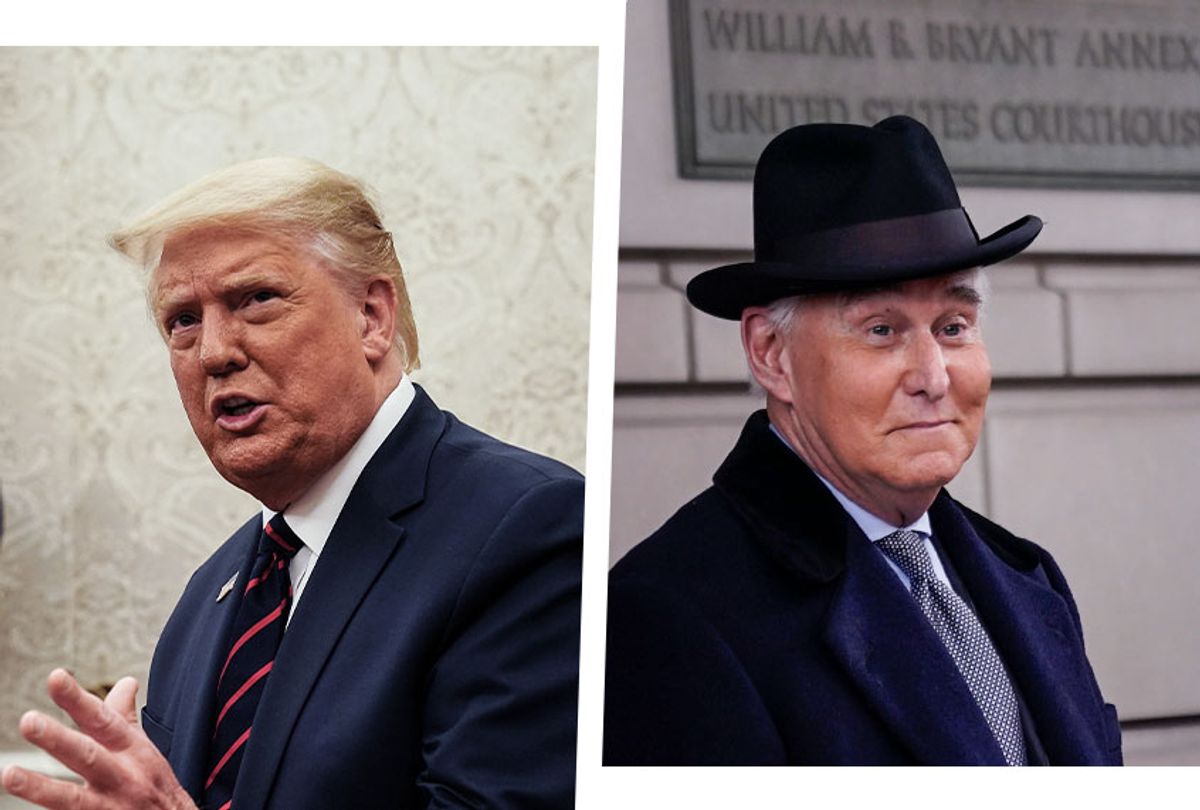 On August 18, the Senate Intelligence Committee released its bipartisan report on Russian interference in the 2016 presidential election. One of the things addressed in the report is Donald Trump's phone conversations with veteran GOP operative Roger Stone during the election — and according to an August 19 article by New York Times reporter Julian E. Barnes, the Senate Intelligence report sheds even more light on those interactions than the Mueller report and Stone's criminal trial.

Barnes notes that according to court records, Stone and Trump had 39 phone conversations from March-November 2016 — one of which Barnes describes as "an intriguing phone call, on October 6, 2016, to Mr. Trump."

"According to the Senate report," Barnes explains, "Mr. Stone received a call that afternoon from a number belonging to an aide to Mr. Trump, who regularly used others' phones to make calls. The topic of the conversation was not known, Senate investigators wrote, but they noted that Mr. Stone was focused on a potential WikiLeaks release."

The Senate Intelligence Committee's report concludes, "It appears quite likely that Stone and Trump spoke about WikiLeaks."

In October 2016, WikiLeaks published hacked Democratic e-mails that had been stolen by Russians.

Barnes points out that in its report, the Senate Intelligence Committee "laid out a range of evidence that Mr. Stone was focused on WikiLeaks. He and Mr. Trump had spoken a few days earlier, on September 29, also on the aide's phone. Another campaign aide, Rick Gates, witnessed it and told investigators that the two men discussed WikiLeaks. After that call, Mr. Trump told Mr. Gates that 'more releases of damaging information would be coming.'"

The Times reporter also notes that Stone "said the Senate conclusion that he had discussed WikiLeaks with the president was based solely on testimony by Mr. Gates and Mr. Trump's former lawyer Michael D. Cohen. Mr. Stone called their testimony tainted by agreements with prosecutors to answer their questions."

Stone has insisted that he did not know that people connected to the Russian government were behind the stolen Democratic e-mails that WikiLeaks published in October 2016 — and that he never discussed WikiLeaks with Trump. Barnes, notes, however, "The Senate report made clear that WikiLeaks, at least, 'very likely' knew the e-mails were coming from Russian intelligence, and that Mr. Stone knew about the most critical WikiLeaks release before it happened."

Stone is among the many Trump associates who has faced criminal charges: he was convicted of charges ranging from witness tampering to lying to Congress and sentenced to 40 months in federal prison by Judge Amy Berman Jackson, a Barack Obama appointee. But Trump commuted Stone's sentence in July, saving him from the prison sentence he was about to begin.

Barnes notes that the Senate Intelligence Committee "rejected Mr. Trump's statement to prosecutors investigating Russia's interference that he did not recall conversations with his long-time friend, Roger J. Stone Jr., about the e-mails, which were later released by WikiLeaks."

In the Mueller report, former special counsel Robert Mueller concluded that the 2016 Trump campaign's interactions with Russians — however questionable — did not rise to the level of a full-fledged criminal conspiracy. And Barnes points out that the Senate Intelligence report does not accuse Trump of lying. But Barnes also points out that the report "laid out extensive contacts between Trump advisers and Russians" and "detailed even more of the president's conversations with Mr. Stone than were previously known, renewing questions about whether Mr. Trump was truthful with investigators for the special counsel, Robert S. Mueller III, or misled them."