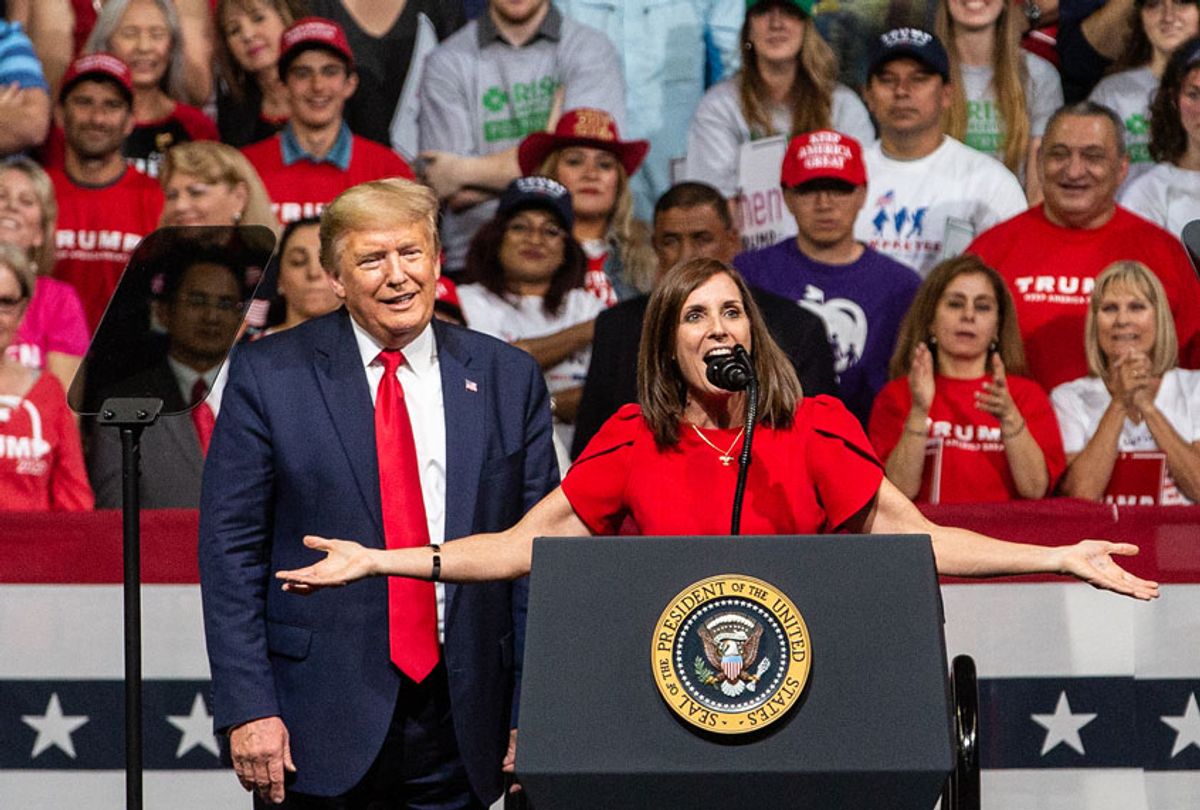 This month, President Donald Trump has not only congratulated some far-right extremists for their victories in GOP congressional primaries — QAnon supporter Marjorie Taylor Greene in Georgia and self-described "proud Islamophobe" Laura Loomer in Florida — but also, refused to criticize QAnon when NBC News reporter Shannon Pettypiece asked him about the conspiracy cult during a press conference. Conservative opinion writer Jennifer Rubin discusses these events in her Washington Post column, citing them as proof that extremism and "nuttiness" are welcome in the modern-day Republican Party.

"It is a favorite game in politics to take the most extreme member of the other party and then paint the entire party as extreme," Rubin explains. "However, when many candidates and officials, plus the head of the party, evidence nuttiness, it is fair to label the party as such."

There is a slang term that has been used to describe the practice of using the occasional extremist to tar and feather an entire group: "nutpicking." Rubin doesn't actually use the word "nutpicking" in her column, but she addresses the concept and writes, in essence, that it would be unfair to describe the GOP as a party of extremists simply because of what Greene or Loomer has to say. The problem, according to Rubin, is that the type of "nuttiness" exemplified by Greene and Loomer isn't the rare exception within the GOP — it is widespread.

Pettypiece, at a White House press conference this week, told Trump, "QAnon believes you are secretly saving the world from this cult of pedophiles and cannibals. Are you behind that?" — and Rubin notes that Trump, rather than distancing himself from QAnon, praised them as people who "love their country."

"Trump also warmly welcomed Republican primary winner Marjorie Taylor Greene in Georgia's 14th congressional district," Rubin writes. "She has been a vocal QAnon devotee and a bigot…. Greene will fit right in. QAnon finds a home with no less than 60 current or former Republican congressional candidates."

Rubin adds that similarly, "Laura Loomer, a self-described 'proud Islamophobe,' got the nomination in Florida's 21st congressional district. For her anti-Islam comments, according to the Palm Beach Post, she has been banned from Twitter, Facebook, Instagram, Uber and Lyft. The GOP will take her — enthusiastically!"

The conservative columnist applauds former Florida Gov. Jeb Bush for his willingness to call out QAnon as "nut jobs" but laments the fact that too many other Republicans are afraid to speak out against "craziness" in their party.

"Republicans often turn a blind eye — didn't see the tweet! — toward Trump's racist and misogynistic outbursts," Rubin writes. "Those who do know better go along with the craziness hoping to be rewarded in the post-Trump GOP. In the meantime, the party has devolved into a cesspool of bigotry and mind-numbing conspiracies, with a large dollop of science denial."