The affair would be a violation of the honor code of Liberty University, which Falwell has led for 13 years 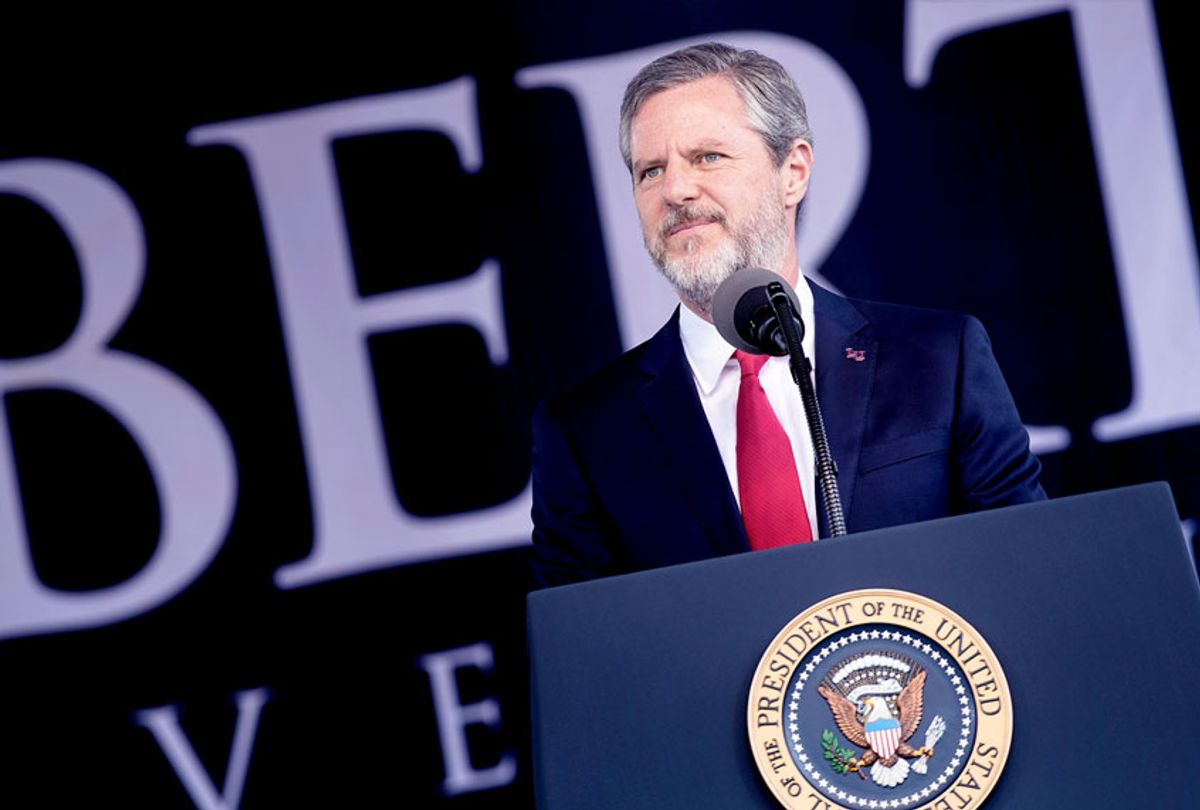 Jerry Falwell Jr. denied reports that he had resigned as the president of Liberty University on Monday after a business associate alleged a seven-year consensual sexual relationship involving the influential evangelical figure and his wife.

Falwell Jr. had taken a leave of absence from the university earlier this month after he posted — and later deleted — an Instagram photo of himself on a yacht with his pants unzipped and his arm around a young woman whose pants were similarly opened. Falwell later said the picture was an attempt at a joke.

Giancarlo Granda told Reuters that he first began the alleged affair with Jerry Falwell Jr. and his wife Becki Falwell in March 2012. Granda claimed that he met the Falwells that month at the Fontainebleau Miami Beach hotel, where he had been working as a pool attendant. Granda, now 29, alleged that the relationship involved having sex with Becki Falwell while Jerry Falwell Jr. watched.

"Becki and I developed an intimate relationship, and Jerry enjoyed watching from the corner of the room," Granda told the outlet in an interview. He further claimed that the trio would meet "multiple times per year," allegedly rendezvousing at hotels in Miami and New York in addition to the Falwells' Virginia home.

Granda said the trio's friendship went south in 2018 amid a business dispute. That year, BuzzFeed News first reported that the couple had enjoined Granda in a business venture when they bought Alton Hostel, a Miami Beach youth hostel, in 2013. At the time of that report, a Falwell representative told BuzzFeed that Granada lived in the area and would manage the property. Granda still holds a stake in the venture, according to Reuters.

Michael Bowe, an attorney for Jerry Falwell Jr., told Reuters ahead of publication that the Liberty University president "categorically denies everything you indicated you intend to publish about him."

However, on Sunday, the night before the report was published, Jerry Falwell Jr. gave a statement to the Washington Examiner in which he revealed that his wife had carried on an affair with Granda. Jerry Falwell Jr. alleged that Granda had subsequently tried to extort money from his family. Granda denied the allegation to Reuters but acknowledged that he had attempted to "negotiate a buyout from a business arrangement."

Reuters said it reviewed emails, texts and "other evidence" which Granda claimed were evidence of the alleged love triangle's sexual nature. The material included screenshots from what Granda said had been a FaceTime call with the Falwells last year. Granda said Becki Falwell had been naked, and that they "discussed their relationship" as Jerry Falwell watched on from behind a door. Reuters said it was able to verify Granda's descriptions of the call.

In a recording from a 2018 phone call obtained by Reuters, Granda and the Falwells discussed what Granda characterized as Becki Falwell's jealousy about his dating other women.

"Gian's been very busy," Becki Falwell reportedly said at the beginning of the recording, adding that Granda had driven her to tears "for a whole freakin' day" when he described "hooking up" with another woman.

"Yeah, got to keep that up," Becki Falwell replied.

Falwell's statement to The Examiner did not implicate himself in the affair. "Becki had an inappropriate personal relationship with this person, something in which I was not involved," the statement said.

Liberty University — founded in 1971 by Falwell Jr.'s father, the popular televangelist Rev. Jerry Falwell, who handed the reins to his son in 2007 — is one of the nation's largest private, non-profit schools, enrolling about 94,000 students online in addition to the 15,000 who attend the Lynchburg, Va., campus. The school holds students to a famously rigid honor code, which extends to sexual relationships.

"Sexual relations outside of a biblically-ordained marriage between a natural-born man and a natural-born woman are not permissible at Liberty University," the code reads. "In personal relationships, students are encouraged to know and abide by common-sense guidelines to avoid the appearance of impropriety. Activities inconsistent with these standards and guidelines are violations of the Online Student Honor Code."

The Falwells have wielded enormous influence over the evangelical community, and Jerry Falwell Jr.'s 2016 endorsement of Donald Trump is widely credited with locking down the conservative Christian vote, without which the twice-divorced real estate mogul would likely have had little hope of carrying the election. A 2018 Gallup survey found that about 41% of Americans identify as evangelical or born-again Christian, a number which has held steady for decades.

Politico published an exposé last September on Jerry Falwell Jr.'s so-called "dictatorship" at Liberty University, citing employees who claimed that he had sent racy photos of his wife to male friends and was "very, very vocal" about his sex life. However, restrictive non-disclosure agreements and a pervading sense of fear allegedly prevented individuals from speaking out against the leader, according to the report.

The Times reported that Cohen, in a recorded conversation with comedian Tom Arnold, said he had made efforts to buy and bury such photos before bringing Falwell "to the table" for Trump. Until that point, "none of the evangelicals wanted to support Trump," Cohen told Arnold.

Becki Falwell served on the advisory board of Women for Trump, an affiliate of Women Vote Smart PAC, which supports the president's re-election campaign. Trump floated Jerry Falwell Jr.'s name to lead a task force charged with deregulating higher education in the early months of the administration.

In recent texts between Granda and the Falwells, the former pool attendant appeared to be frustrated, Reuters reported.

"Since you're okay with ruining my life, I am going to take the kamikaze route," reads a text Granda allegedly sent this June to Jerry Falwell Jr. "It really is a shame because I wanted to reach a peaceful resolution and just move on with our lives but if conflict is what you want, then so be it."

"You should by now understand that I will not be extorted," Jerry Falwell Jr. allegedly replied. "I have always treated you fairly and been restrained in response to your threats because I did not wish to ruin your life. Going forward, stop contacting me and my family."

Though Granda admits to being a willing participant in the alleged sexual relationship, he told Reuters that he now feels exploited.

"Whether it was immaturity, naïveté, instability or a combination thereof, it was this 'mindset' that the Falwells likely detected in deciding that I was the ideal target for their sexual escapades," he claimed.

Justin Lehmiller, a research fellow at the Kinsey Institute, recently surveyed 4,175 Americans about their sexual fantasies. While Republicans and Democrats fantasized at the same rate, Republicans were more likely than Democrats to fantasize about sex outside of marriage, Lehmiller found.

"Republicans also reported more fantasies with voyeuristic themes, including visiting strip clubs and practicing something known as 'cuckolding,' which involves watching one's partner have sex with someone else," he added.

As of Monday evening, Liberty University and Jerry Falwell Jr were negotiating over his possible resignation, The Washington Post reported.

Liberty University, Jerry Falwell Jr., and Giancarlo Granda did not respond to Salon's requests for comment.