Were Don Jr. and Kimberly "coked up"? Maybe not, but it's all part of the fascist tradition

Hyperactive, aggressive rhetoric — with a stimulant-style flair — is meant to overwhelm the audience emotionally 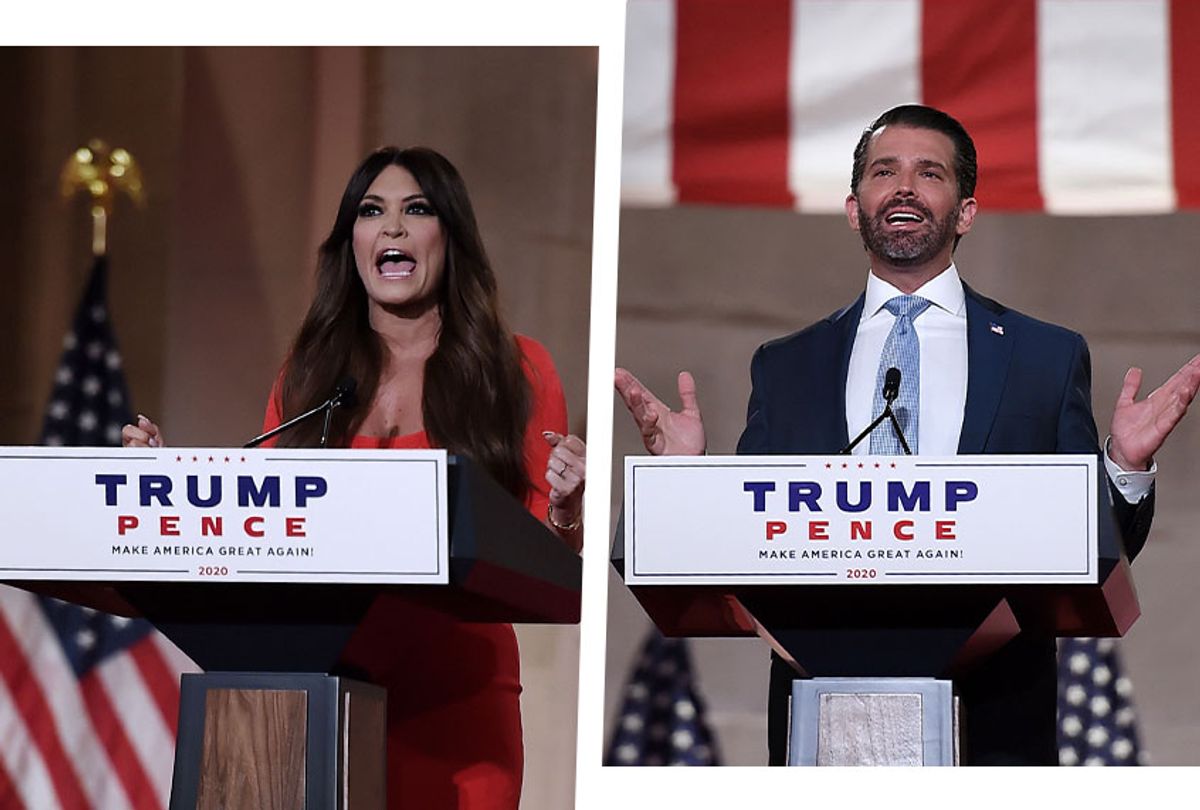 During the first night of the Republican National Convention, the word "cocaine" started to trend on Twitter, and not because there was any breaking news about the infamous party drug. No, it's because many of the speakers at the convention brought a hyperactive bombast to the proceedings that was highly reminiscent of the effects of cocaine and other illegal stimulants. Watching some of the speeches, in fact, felt quite a bit like sitting through that scene in "Boogie Nights" where a menacing half-naked cocaine dealer brandishes a gun while pacing and ranting to 1980s hits like "Sister Christian" and "Jessie's Girl." The only thing missing was a dude in the corner setting off fireworks randomly to keep people even more on edge.

In particular, Donald Trump Jr., the president's eldest son, along with his girlfriend, former Fox News host and current Trump campaign factotum Kimberly Guilfoyle, delivered speeches that caused widespread speculation on social media about the use of chemical assistance.

"Don't let the Democrats take you for granted. Don't let them step on you. Don't let them destroy your families, your lives and your future. Don't let them kill future generations because they told you and brainwashed you and fed you lies that you weren't good enough," Guilfoyle ranted in a speech so hyperventilating and ridiculous that Mother Jones paired it with North Korean propaganda music.

We added the music so you don't have to pic.twitter.com/rVJ45bfqcM

On Tuesday, MSNBC's "Morning Joe" played a video that intercut Guilfoyle's speech with the famous episode of "The Office" in which Dwight Schrute unwittingly channels Benito Mussolini during a sales convention speech.

Trump Jr. brought another variation on the cocaine aesthetic, with his hurried speech, bloodshot eyes and skin shining with sweat as he gravely declared that "the radical left" wants "to bully us into submission."

There was even a hat-tip to the unhinged gun-waving with the presence of Mark and Patricia McCloskey, a St. Louis couple who became right-wing heroes after being photographed swinging their guns like "Scarface" characters at a bunch of Black Lives Matters protesters who passed by their home earlier this summer. A video of their bizarre meltdown was played at the RNC before a subdued but morbid living-room-style chat in which Patricia warned that "your family will not be safe in the radical Democrats' America."

This entire display left progressives, mainstream journalists and anyone who isn't already in the Trump tribe befuddled. It was grotesque and overwhelming, and only served to unnerve viewers. Even the presence of speakers who took a more measured tone, like former U.N. ambassador Nikki Haley and Sen. Tim Scott of South Carolina, didn't help matters. If anything, the rapid and dramatic tonal shifts only served to discombobulate viewers more. It was an emotional roller coaster that was, yes, reminiscent of the wild mood swings of someone who's cranked up on hardcore stimulants.

As gross as it all was, it would be a mistake to assume that Republicans don't know what they're doing. On the contrary, this coked-up aesthetic has a long and unsavory history in the annals of fascism, authoritarianism and other forms of personality cult.

Hitting audiences with a firehose of emotions is about deliberately unmooring them, spinning them so hard emotionally that they can't tell up from down. It's about breaking down people's sense of self and their grip on reality, so they turn into putty at the hands of the authoritarian leader, to be rebuilt in the form that he prefers.

The emotional overloading strategy, often openly fueled by stimulant drugs, was a famous aspect of Nazism, which was known for rallies with long and overbearing speeches and a general atmosphere designed to overwhelm participants. Fidel Castro, of course, was known for giving speeches, that often lastd hours, that would wear down listeners so they could be built back up again in his image. Cult leader Jim Jones would suck down mountains of drugs and then rant at his followers for hours through the speaker system at Jonestown, breaking them down emotionally so that resistance to his message became impossible.

Hell, cocaine abuse and fascism are so intertwined that when David Bowie was at the height of his cocaine addiction, he convinced himself he was a fascist.

To be clear, I'm not suggesting that anyone on Team Trump is using drugs. (And I'm not saying they're not.) Really, that's beside the point. The issue isn't drugs themselves, but the aesthetics of the convention — ones that happen to be suggestive of drug abuse, but can also be induced by other forms of emotional flooding, including inflated rhetoric, loud music, paranoid fantasies, and rapid and disconcerting tonal shifts. The main thing is to keep up a sense of too-much-ness that makes it hard for people to get their bearings and start thinking more clearly. Clear thought, after all, is the biggest threat to Trumpism.

In fact, the shouty, nutty, coked-up atmosphere of much of the televised convention on Monday night is perfectly in line with the aesthetic Donald Trump has used to dominate his audiences for years. His rallies are notorious for blasting loud music at decibel levels far beyond what is normal for campaign rallies, and they've only gotten louder. After enduring that for however long, the audience is then subjected to a rambling Trump speech that usually clocks in at more than an hour and veers wildly from one incoherent grievance or conspiracy theory to another. The whole process couldn't be better designed to break down a person's emotional defenses or remaining tendrils of rationality, and indeed, it's wise to assume that's exactly the purpose.

Trump really is just building on what Fox News has been doing for years to get viewers to turn off their rational brain and swim in a sea of overstimulated emotions. The formerly "fair and balanced" network employs not just loud graphics and loud music, but also overwhelms its audience with violent and even salacious imagery. For those who aren't conditioned to this already, it feels incredibly alienating. But it's important to grasp that the Trump fans who this convention is geared toward have ingested a steady diet of increasingly chaotic media for years now. If it all felt coked-up, well, that was likely the intention. Because giving viewers a moment to breathe might lead them to start thinking for themselves, and that is the last thing Trump or the Republican Party want.