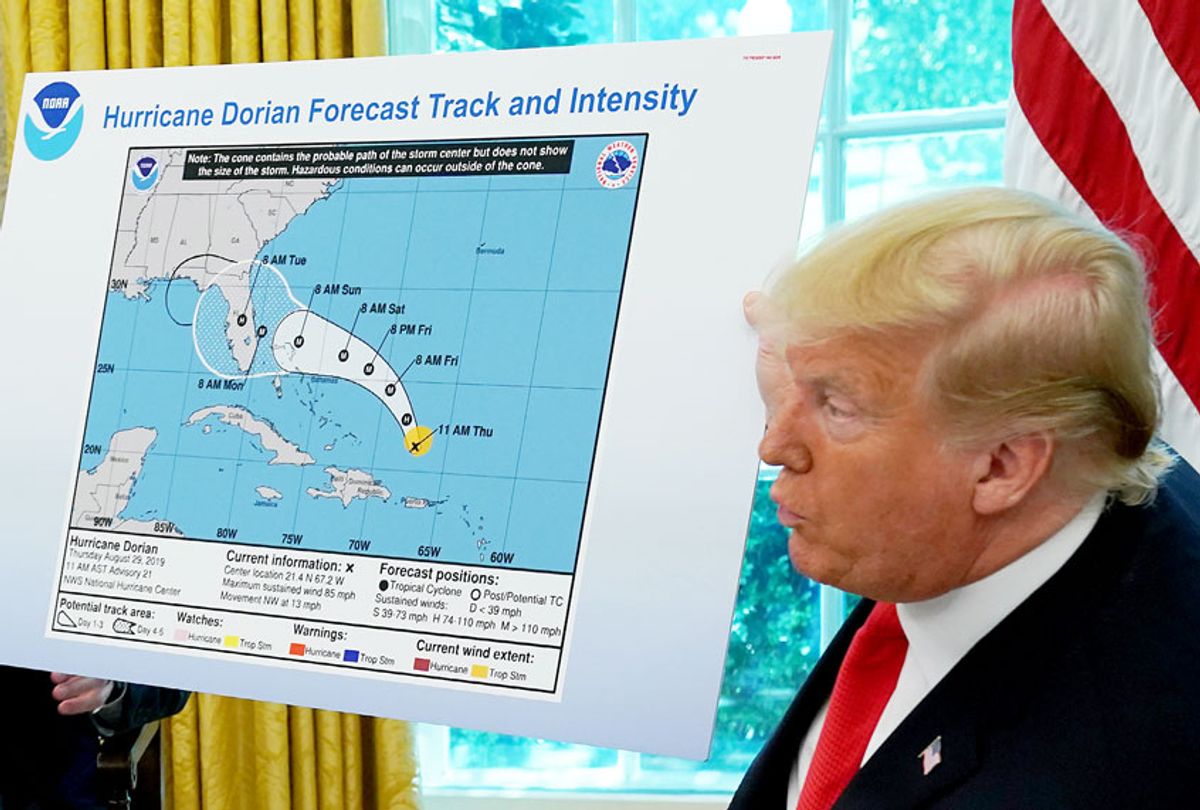 U.S. President Donald Trump (R) references a map while talking to reporters following a briefing from officials about Hurricane Dorian in the Oval Office at the White House September 04, 2019 in Washington, DC. (Chip Somodevilla/Getty Images)
--

Climate action advocates in the U.S. amplified the urgency needed for political leaders from both major parties—including Republicans in the middle of their 4-day national convention this week—to address the planetary climate crisis as Hurricane Laura, upgraded to a potentially catastrophic Category 4 earlier in the day, barreled toward the Gulf Coast.

"It is terrifying to watch the speed with which Hurricane Laura is intensifying," author and climate activist Bill McKibben tweeted. "The hot waters of the Gulf are an endless source of destructive power."

McKibben's tweet came as the National Hurricane Center warned that Laura, expected to make landfall along the Texas-Louisiana line Wednesday night, is "an extremely dangerous Category 4 hurricane" that could unleash an "unsurvivable storm surge."

Among the Louisiana communities in the storm's path is Lake Charles, with federal forecasters warning that the city could experience winds of up to 110 mph.

Lake Charles is "a majority Black city with metro area population of 225,000" and per capita income of $22,855," tweeted meteorologist and journalist Eric Holthaus, who referred to the city as being at "the crossroads of the climate emergency and environmental racism of the oil industry."

Progressive group Power4NewMexico drew attention to the National Hurricane Center's blunt warning about the power of the storm. "The more we wait on a bold climate action, people will die from the climate crisis," the group wrote.

While the Democratic Party platform has been criticized for not being bold enough to address runaway planetary warming, Republicans, who are holding their convention this week, have been harshly panned for having "absolutely no plan to deal with the climate crisis."

And, as Sen. Bernie Sanders (I-Vt.) noted Wednesday, the un-action plan has to been seen in the context of the multiple climate-fueled disasters currently ravaging the nation:

Hurricane Laura producing an unsurvivable storm surge in Texas and Louisiana. A catastrophic 800-mile derecho in Iowa and Illinois. Raging wildfires in California. No. The Green New Deal is not radical. Having a president in office who calls climate change a hoax—that's radical.

For those in the storm's path Wednesday—and future storms to come— the need for bold climate action is clear: