The latest "Bill & Ted" adventure is more bogus than excellent, despite some chuckles

Keanu Reeves and Alex Winter are back to rekindle that Wyld Stallyns magic, and time travel shenanigans ensue 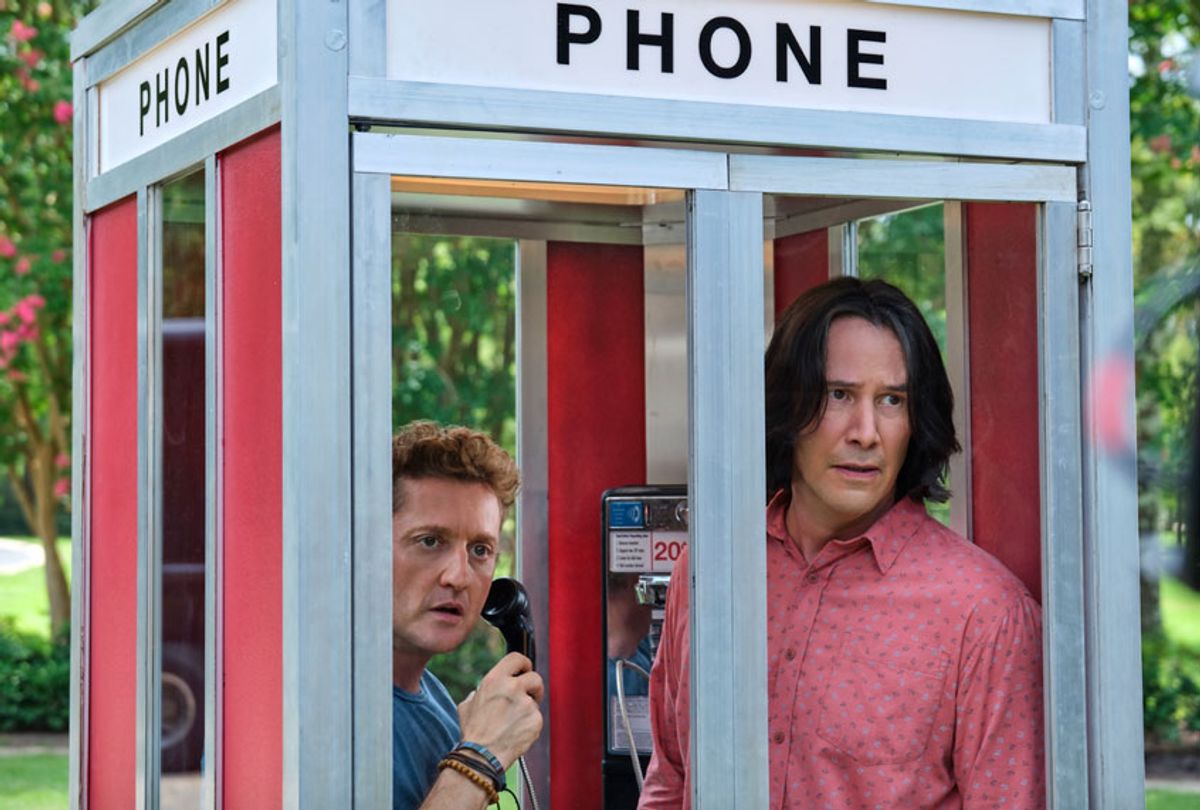 Whoa! Bill (Alex Winter) and Ted (Keanu Reeves) are back! Sure, it seems like the two dudes from San Dimas have been lost in the Circuits of Time for three decades — they have! — and now the teens are middle aged fathers. Bogus! Or excellent?!

"Bill & Ted Face the Music" opens with a brief recap of what the guys have been up to since "Bill & Ted's Bogus Journey" back in 1991. Their band, Wyld Stallyns, did have a hit single but they also broke up. They married the Princesses, Elizabeth (Erinn Hayes) and Joanna (Jayma Mays), and each had a daughter — Thea (Samara Weaving) and Billie (Brigette Lundy-Paine). Oh, and they still need to write the song that unites the entire world and prevents time from folding in on itself.

However, as the film opens and Wyld Stallyns are seen performing a song with a theremin, bagpipes, and throat-singing, this critical task may be next to impossible. Following a gag involving bootstrap paradoxes and causal loops, Ted admits that he is tired and thinking of selling his Les Paul. Bill, however, reminds him they have a destiny to fulfill. So, it is good that Kelly (Kristen Schaal) arrives from the future to guide the guys to San Dimas 2720 AD.

Kelly is, it is revealed, the daughter of Rufus (George Carlin, in a holographic cameo), and her mom (Holland Taylor) is "The Great Leader," who tells Bill and Ted they need to "save reality as we know it by uniting humanity across all time" with the song they are supposed to create. And they have only 77 minutes and 25 seconds to do this.

Yes, it's a flimsy plot, but "Bill & Ted Face the Music" uses it as a framework to riff on the storylines of the previous two outings. In one plotline, Bill and Ted use their time traveling phone booth to see their future selves and steal the song they must have written. (This echoes "Bogus Journey," where the pair met their evil doubles). There is some amusement in seeing future Bill and Ted slumming at an open mic night, or as bulked up and tattooed prisoners. The whole "other us-es" gimmick feels most inspired when Bill and Ted meet themselves as old men near death. There's a poignant, philosophical moment where wise old Ted tells his younger self, "I looked at you and saw myself."

But most of these encounters are silly, especially one scene set in a large mansion that features a clever musical cameo and Reeves in a rather eye-popping fat suit. "Bill & Ted Face the Music" could have milked more humor out of the guys' travels and costumes, but it generates most of its smiles from the duo talking in sync.

The real appeal of this installment is Thea and Billie's excellent adventures, which take them back in time to round up a supergroup consisting of the world's greatest musicians so they can play in their fathers' band. Recalling the collection of historical figures from the first "Bill & Ted" film, they meet Jimi Hendrix (DazMann Still), Louis Armstrong (Jeremiah Craft), Ling Lun (Sharon Gee), and Mozart (Daniel Dorr) among others. The film has great fun when Mozart plays the piano and Hendrix accompanies him on electric guitar.

However bodacious the Thea and Billie storyline is, "Bill & Ted Face the Music" includes a goofy subplot involving Dennis (Anthony Carrigan), a robot sent by the Great Leader to kill Bill and Ted that ends up being lame. Its main purpose is to land the major characters in Hell with the song deadline fast approaching. This extended sequence is more strained than funny until Bill and Ted's former bandmate, Death (William Sadler), turns up. The banter between the guys and their former band mate yields a few smiles, but finesse is needed where Death's ego is involved.

Finesse is not something this film employs much of. At times "Bill & Ted Face the Music" feels sloppy or lazy. Reeves' expression often appears to be a scowl of incomprehension. His performance is disappointingly listless. In contrast, Winter seems to be providing most of the energy, which dampens the enjoyment of the pair reuniting. Better are Weaving and Lundy-Paine who create their own Bill-and-Ted dynamic. They could almost have their own spin-off film based on their work here. But will there be a rallying call for that? Were fans of the first two films campaigning for this three-quel?

As for the supporting cast, Schaal is underused in a role that mostly has her phoning The Great Leader and complaining, and Kid Cudi plays himself and spouts quantum physics, for what it's worth.

The film, ultimately, is about the song. And to its credit, "Bill & Ted Face the Music" delivers the sweet message that music has the power to unite the world in its special-effect laden mash-up finale. Now if only Bill and Ted could travel back in time and fix the problems with this new film that would be most excellent.

At least the post-credits cookie should make fans chuckle.

"Bill & Ted Face the Music" is in theaters and available for purchase online Aug. 28.