Trump keeps rolling out the same threatening vision of American chaos. Does he even understand he's in charge? 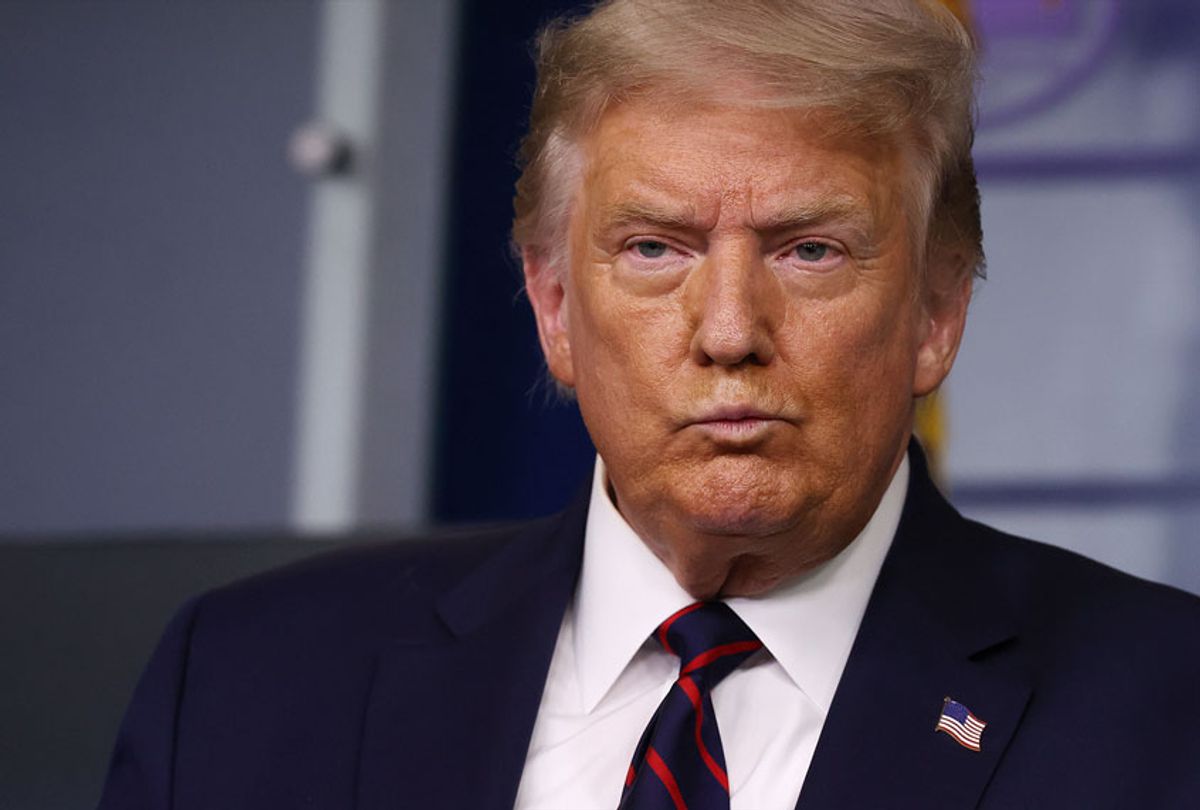 The party conventions are over and we can take a breather for a few days until the fall campaign begins in earnest. The next big events will be the debates between Joe Biden and Donald Trump, and I think we'll all need to lay in a new supply of antacids and alcohol to get through those.

It's pretty clear that Trump's grand vision was to tape all the speeches of the Republican National Convention's first three nights in an empty auditorium to make his big night look bigger and better by comparison. I have no doubt he'll be desperate to see how his night did in the ratings. If he didn't beat Biden's numbers he'll be forced to call the TV ratings fake news and that will be very disappointing. He loves ratings.

Trump certainly put it all out there, staging a big partisan rally on the lawn of the White House, with all the flags in Washington as background, big screen TVs and a grand entrance from the balcony. (For a moment I thought he was planning to deliver it from there, as if he were Il Duce himself.)

The use of the people's house for this sort of event is unprecedented but obviously Trump didn't care about that. In fact, he seems to have taken pride in his defiance of the tradition, calling it more than a house but instead a "home," pointing toward it and bragging at one point, "The fact is, I'm here, and they're not."  It was as if the White House were just another of his many properties, to be used for commercial and personal gain.

Trump knows how to bring the pomp, and the spectacle made clear why it's unethical to use the White House or national monuments for partisan purposes. The familiar grandeur of the White House and the grounds lent an imperial majesty to the event that was frankly un-American. Let's just say it's kind of gross to see the White House used like one of Saddam's palaces.

The large crowd was seated close together for hours, unmasked, shouting and chanting "Four more years" with abandon. The president could only have modeled worst leadership behavior if he'd held it inside. It's such a childish defiance of public health guidelines. But then, the chairman of the so-called coronavirus task force was glad-handing in the mask-free crowd after his speech the night before, so this seems to be administration policy.

Throughout the RNC, when anyone bothered to mention the pandemic, which wasn't often, they spoke as if the whole thing were in the past and America has come out the other side better than ever. So I suppose wearing masks and practicing social distancing would seem a bit contradictory, since it's all over now. Someone needs to tell the thousands of people who are still dying from COVID each week that they can stop doing that. It's over.

Throughout the week the themes were pretty consistent. The first was that if you knew Donald Trump like the speakers know him you'd like him a lot more. The stories they told (some of which were, um ... untrue) would have been considered simple tales of ordinary kindness or good manners in anyone else, but since it's Trump they are presented as acts of great benevolence.

The second is that he's accomplished more in three and a half years than any president has every accomplished in two full terms. This is a ridiculous lie. The fact-checkers are probably still working overtime to correct all the dishonest and misleading claims. This is patented Trump, however, and it's unlikely that any of his devoted voters will care whether it's true or not.

The third theme is the one they plan to run with all the way to November, and it's clearly the one Trump himself relishes the most: No one will be safe in Joe Biden's America. If he wins the election you will have to run for your lives, because bad people from "Democrat-run cities" will be coming to kill you in your beds.

When you stop and think about it, this is the same line he used in 2016 about Muslims and immigrants. He obsessed over ISIS beheadings and suggested that America had to fight fire with fire. He gave lurid speech after lurid speech describing immigrants crossing the border to rape and kill "real" Americans (which of course means white people).. And you'll recall that before the 2018 election he conjured up "caravans" full of dark-skinned "invaders" heading for the U.S. border, who were also coming to kill you in your beds.

More than anything else, including Trump's ludicrous bragging about being a "very stable genius," is his basic pitch. He just retools it slightly to reflect whatever is happening at the moment.

He laid it on thick in his acceptance speech, naming Kenosha, Minneapolis, Portland, Chicago and New York as examples of current violent hellscapes that will destroy America if Joe Biden has his way. He doesn't seem to understand that most people are scratching their heads in confusion since he's the president who is presiding over these alleged dystopian nightmares right now.

If there's any single individual in power who is inciting violence in the streets, it's President Donald Trump. And he's doing it for purely political reasons, as his almost-former presidential counselor Kellyanne Conway helpfully explained at this same convention: "The more chaos and anarchy and vandalism and violence reigns, the better it is for the very clear choice on who's best on public safety and law and order,"

Conway is right. But she's making the argument for Joe Biden. Trump is making everything worse.

Nonetheless, he and his campaign have decided that they can peel off some of those famous "suburban housewives" by pulling the old scare tactic one more time. As usual, some Democrats are getting nervous that it might work.

Anything's possible. But Nate Silver of FiveThirtyEight has pointed out that part of the reason the polling has shifted a bit on Black Lives Matter protests has more to do with Trump not stirring the pot as much during the last six weeks or so:

He's back at it now. With the events in Kenosha, in which police shot another black man and then one of Trump's fans shot three protesters, killing two of them, it's not clear to me that Americans will see Joe Biden as the real threat.

Indeed, if there is a threat that people may be coming to kill us in our beds, that threat isn't coming from Black Lives Matter protesters. It's coming from right-wing extremists, whom Trump has refused to acknowledge or discuss, and who he has been inciting to violence for years now.

As this former DHS official who worked on domestic terrorism says, "We are less safe today because of his leadership. We will continue to be less safe as long as he is in control."

On Thursday night, Americans heard more of the same old fear-mongering. But after watching him in action all summer long, it seems likely that most Americans understand that the only thing they have to fear is Trump himself.