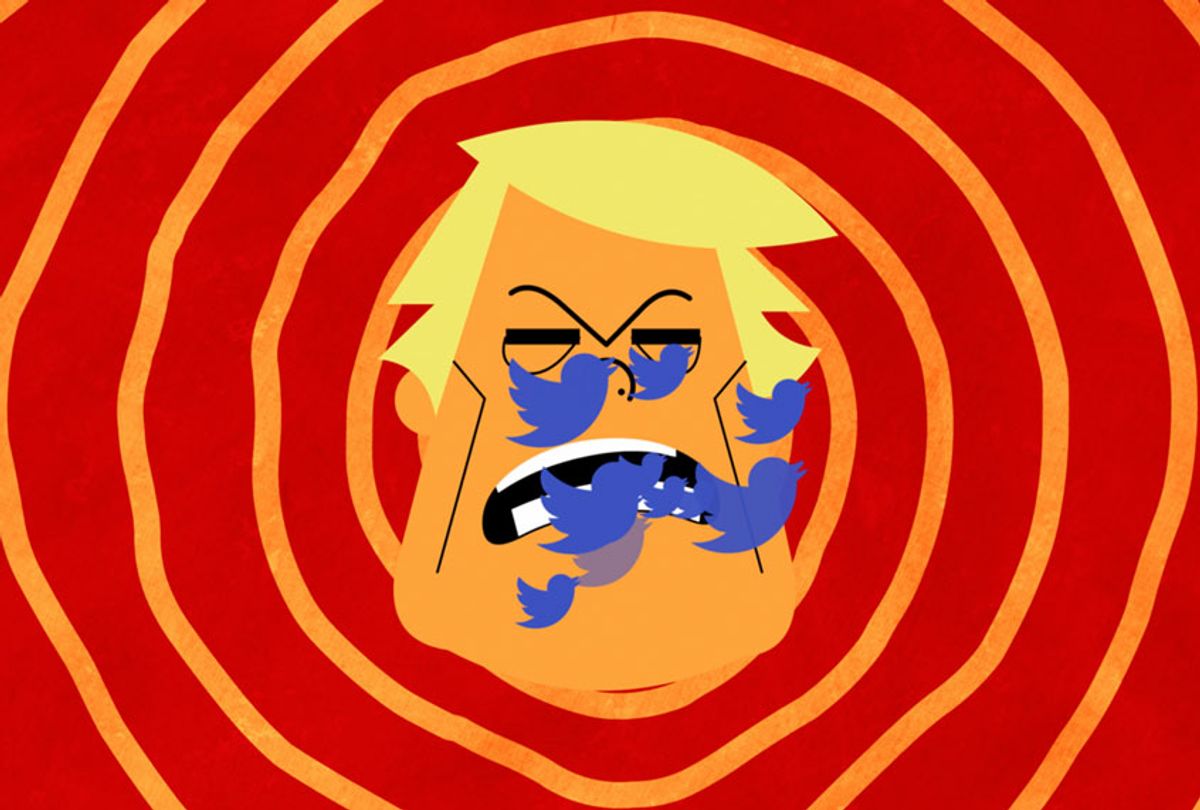 "#Unfit: The Psychology of Donald Trump" proposes that his public comments, such as on Twitter, offer a basis for psychological diagnosis outside of the clinical setting because they are observable behavior (Courtesy of #Unfit)
--

Let us presume that if you intend to watch "#Unfit: The Psychology of Donald Trump" you probably agree with director Dan Partland's angle. That also means nothing the firm's experts have to say about their impressions of the man or his fitness to govern is particularly revelatory.

Instead, think of the film as an 83-minute warning against handing another four years of the presidency to Trump, spelled out by an assortment of mental health professionals, historians, experts on authoritarianism, a former intelligence officer . . . and Lincoln Project co-founder George Conway and former Trump super pal Anthony Scaramucci.

Right about now maybe you need to hear from these people about as much as you may be hankering for another four days of the GOP's lie-tastic tent revival.

For those who remain curious, Partland has assembled a chorus of voices to deliver their expert confirmation of an alarmingly common assessment of Trump, which essentially comes down to "woo, that bitch be cray." Only, you know, in actual clinical terms.

"#Unfit" kicks off an assessment of Trump's personality, and confirmation from the likes of those who were closest too him, before finding parallels between his mental health profile and that of dictators past and present. But it also functions as a defense of expertise – particularly that of the mental health professionals who have taken their concerns public.

Prominently featured is the Duty to Warn PAC's founder John Gartner, Ph.D., a psychologist and former professor at the Johns Hopkins University Medical School who explains the meaning of his and his colleagues agreed upon diagnosis of Trump as a malignant narcissist, while defending their ethical choice to do so.

At the heart of the criticism sustained by mental health professionals like Gartner is the oft-cited American Psychiatric Association's Goldwater Rule, which states that it is unethical for psychiatrists to give a professional opinion about public figures from whom they haven't obtained consent and whom they haven't examined in person.

Gartner offers his interpretation of the rule by explaining that when Goldwater was running for president in 1964, and 1,189 psychiatrists declared his unfitness for office in the defunct magazine "Fact," they were basing their assessments on Freudian methods that have since fallen out of practice.

Little wonder there: Among some of the declarations made were, "It is apparent that Goldwater hates and fears his wife," and "He is a mass murderer at heart," and "He was never forgiven his father for being a Jew."

But as Gartner explains, the current standard of diagnosis in the mental health field is the Diagnostic and Statistical Manual of Mental Disorders (DSM-5), which holds that observable behavior is more vital to a clear diagnosis than the patient interview.

Trump's entire presidency is one long stretch of observable behavior available to be interpreted in multiple platforms, and that's before a person digs through his tweets.

Thus by standing on the ground of the Tarasoff Rule, which imposes a duty on a therapist to warn appropriate parties when a patient may present a risk of harm to a specific person or persons, Gartner and his colleagues are emboldened to share their assessment. In this case the party in question is the American public, and the diagnosis, malignant narcissism, encompasses paranoia, antisocial personality disorder (otherwise known as psychopathy) and sadism. To which any Never Trumpers who has endured the past four years can only reply, "Um, duh-doy!"

If I'm coming across as cavalier in this review, it's only because "#Unfit" is a work meant to confirm suspicions many of us have long stopped agonizing over. The film calculates that Trump has busted out at least 19,127 lies and false claims since his inauguration, and one look at our Twitter feeds is enough to observe the ways that he's shattered norms and broken laws.

The Republican Convention itself contains multiple demonstrated violations of The Hatch Act. It also occurred on the heels of released findings of a bipartisan report from the Senate Intelligence Committee that confirms that Trump's 2016 campaign did in fact work closely with the Russian government, including intelligence operatives, to sabotage that election and help him win the presidency.

The public and the media should be making a bigger deal about those developments than it is, and the fact that their import has been muted by collective head shaking over a party convention with no platform other than praising Trump says a great deal about the environment in which this film is debuting. Hopefully we care about these violations. Those who don't aren't going to be moved by this movie.

However, "#Unfit" successfully makes its case concerning why Trump's psychological instability should be of concern to the public – you know, other than the fact that he's channeled his sadism, sexism, racism and general violation of democratic norms into harmful policies. Once the mental health professionals have had their say, the historians step in to offer their assessment of what it means to have a malignant narcissist in charge of a nuclear arsenal or fueling nationalism and racist violence.

Experts on the cyclical rise of authoritarianism in the 20th century walk us through the steps leading up to unrest and war in prior decades to let us know how close we are to losing our democracy. Former intelligence officer Malcolm Nance is there to remind us that this man has access to our nuclear arsenal, has made antagonistic statements about leaders of other unstable governments and cozied up to murderous strongmen, and has removed the U.S. from multiple treaties designed to make us and the world safer.

Taken in that context, it's unclear what is to be gained by having Conway characterize Trump as "a practical joke that got out of hand. That's the problem," or Scaramucci weigh in about what's at stake by reminding the viewer that it doesn't make sense to "disrupt a 243-year experiment for one dude's personality."  Obviously those two are present to offer some bit of levity in the midst of all these alarms going off. Then again, much of what they have to say only weakens the brew here. And a side trip about Trump's propensity to cheat at golf comes off as a cheap swipe.

It's not that we shouldn't care about what the experts in "#Unfit" have to tell us – we should. We're also so numb or set in our assessment of this administration and therefore resilient in our passion to either re-elect Trump or pry his orange corruption out of office with our vote, that I'm not sure this movie has the weight it might have had in saner administrations.

And in some respects this makes it the documentary version of a koan: if a film is dozens of mental health professionals screaming a warning about a leader's unfitness arrives at a time when we're submerged in multiple disasters of his making, does it make an impact, let alone any sound at all?

"#Unfit" might not be potent enough to fully indict Trump, and it could arrive too late for anyone to listen to its warning. If nothing else, though, it allows Gartner and his peers to be secure that they made their best effort. "I am more confident in my diagnosis of Donald Trump than I have been of any other diagnosis, because I have more information," he says. That we can believe.

"#Unfit" releases in theaters and virtual cinemas on Aug. 28 before heading to on-demand platforms Sept. 1.