Some professors at Georgia College have half their class populations in quarantine, according to faculty sources 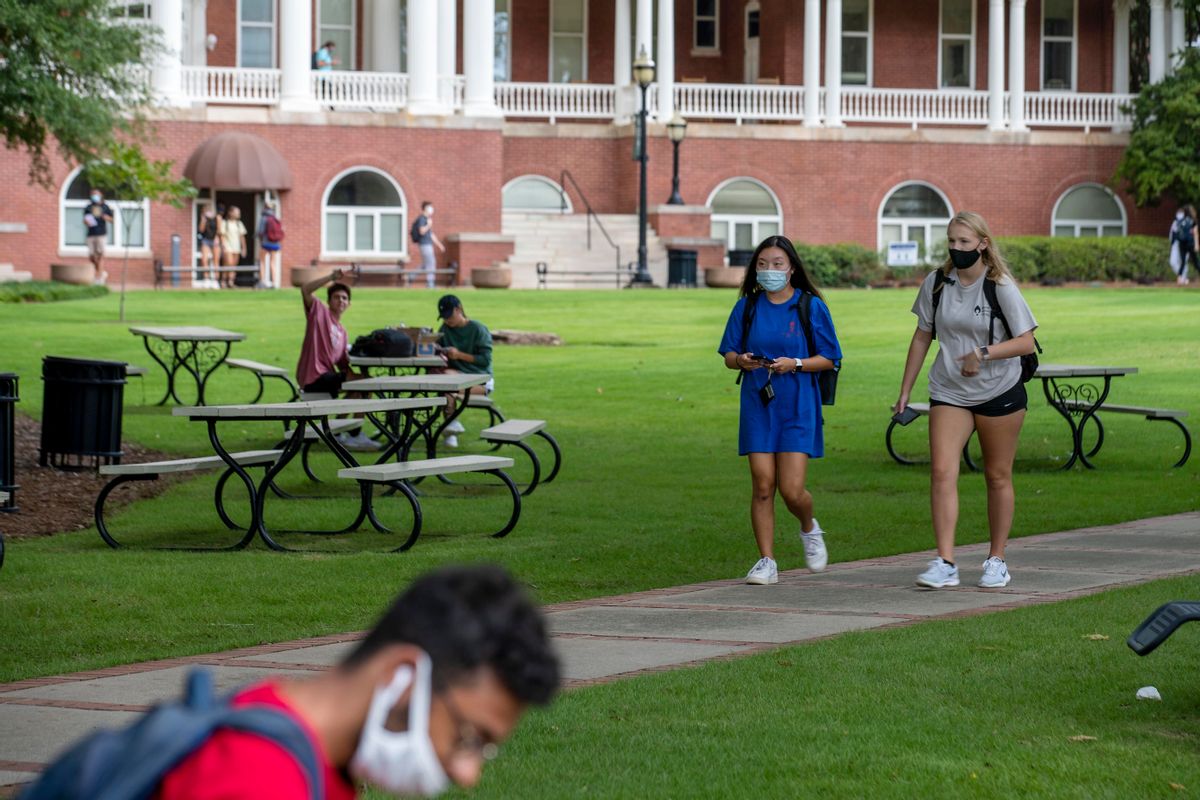 A small liberal arts college in rural Georgia has seen a COVID surge in the last two weeks that has made it one of the nation's leading hotspots.

In response, campus workers at Georgia College in Milledgeville, part of the University System of Georgia, are holding an on-campus "die-in" Friday to protest what employees see as the school's "willful negligence" in failing to control the coronavirus through the first weeks of classes.

The COVID tracking page on the school's website has posted 495 cases since June, 450 of those among students who have returned to campus since the week of Aug. 17. The New York Times college case tracker ranked the school 14th nationwide in total cases Thursday. That number represents about 7% of Georgia College's total 7,000 enrollment, easily the highest rate of the top 25 schools on that list.

By comparison, the Times' tracker ranks infections at the University of Texas in ninth place overall — but that represents just 483 reported cases out of 50,000 enrolled students. Aside from Texas Christian University, which has about 10,000 students, and University of Alabama at Birmingham — a ranking that some of its 17,000 students and administration both protest — none of the schools ahead of Georgia College on the Times' list have fewer than 20,000 students, and no school has reported more than 1,000 cases. Large state schools with enrollments of 50,000 or more, such as the University of Michigan, University of Florida and Penn State, have fewer cases than Georgia College.

The workers' action is part of the United Campus Workers of Georgia's (UCWGA) statewide campaign to hold the University System of Georgia Board of Regents responsible for outbreaks due to what a UCWGA press statement calls a "forced campus reopening."

"Union members demand choice in online teaching and learning, increased testing capacity, quarantine housing for positive students, hazard pay for all essential workers, and no layoffs in the event of campus closure," the statement says.

A non-tenured faculty and union member, speaking on the condition of anonymity, said that the school is "acting as if they can't do anything, but there are a number of reasons to believe they could be doing more," pointing to in-person regulations.

The die-in is in solidarity with Georgia College's sister school, the state flagship University of Georgia, which held one earlier this year.

The action, scheduled for two hours from 8 to 10 a.m. will feature faculty and staff lying on the grass — socially distanced — with signs with messages such as, "We don't want to die" and "We don't want our students to die."

A tenured faculty member told Salon that the circumstances were "some dark shit."

"I think what I fear the most is that they'll get away with it — with treating faculty, staff and students, not to mention the local community, as utterly expendable. This is some dark shit," the professor said. "You can feel the long arm of the Republican money machine all over it."

Faculty were reportedly told that they could teach remotely only if they could prove one of a dozen or so health conditions on a list — such as high blood pressure, or being over 65 — but that did not extend one degree further, for example, to faculty members who may live with someone who is elderly or ill or has underlying conditions.

"Many faculty and students here are very, very disturbed by the willful negligence on the part of the USG and our own administration," another faculty member told Salon, again on the condition of anonymity.

In a statement provided to Salon, the university supported the right to free speech and concern for well-being on campus.

"Georgia College fully supports the freedoms of speech and expression for our faculty, staff and students," the school said, adding that "The health and well-being of our students and campus community will always be our top priority."

"The university and it's faculty members are doing all they can to ensure that students have an outstanding academic experience. For students in quarantine, faculty members will work to make sure learning continuity continues until they are able to return to campus safely," the statement said.

However, faculty argue that the school has not established independent quarantine facilities, and the school did not answer Salon's specific question about the matter.

Faculty working groups developed a multi-part reopening plan over the summer, including rules and policies, one of those being that classes must be in-person but office hours and student meetings could be virtual. Though faculty were included in these policy groups, multiple professors told Salon that many concerns were dismissed out of hand, and they did not expect that in-person teaching would continue if case numbers surged as they have.

"Most people in these groups, I think, thought that if case numbers went up, they would go to the all-remote plan, to ensure everyone's safety," the tenured professor said. "So here we are, two weeks in. Some people have 50 percent of their class populations in quarantine or isolation."

Campus workers say that the university administration seems to be displacing blame onto students, threatening them with suspension if they attend parties and sending students who fall ill home, with no reserved quarantine locations in place.

The school, which pointed out that it has spent "the past several months" preparing for in-person classes with social distancing and "other mitigation measures," pointed to the students in its statement.

"We continue to remind our students that COVID-19 can spread rapidly at off-campus social gatherings, where social distancing and other mitigation measures are not maintained. With only 21 employee cases at Georgia College since June, our data is showing that the spread of COVID-19 is largely happening in off campus locations among our student population," the statement said.

"I think most faculty find this appalling," a professor said. "Those in the wrong are the people running the show, who brought the students back into what was, in early August, already a precarious environment."

That environment extends to Milledgeville — which has itself registered as a coronavirus hotspot, month after month — a relatively poor city of about 19,000 residents, with the college campus dominating its manicured antebellum downtown.

The Milledgeville Union-Recorder reported earlier this month that Navicent Health Baldwin Hospital's intensive care unit has been full since the pandemic hit the city in mid-March.

Todd Dixon, the hospital's CEO, told the paper that they have experienced about a 3% overall increase in admissions from previous years.

"We also have seen a 26 percent increase in our average daily census," said Dixon.

On the other side of Milledgeville — which was the capital of Georgia from 1804 to 1868, and was left untouched by Union Army Gen. William Tecumseh Sherman's scorched-earth march through Georgia during the Civil War — sits another campus: The empty, cratered brick dorms of Central State Hospital, which was originally called Georgia Lunatic Asylum and was once the largest mental hospital in the world, with 12,000 inmates.

Central State has seen at least 10 coronavirus deaths, according to local news reports, including staff.

One non-tenured professor told Salon that students had in fact been admitted to the hospital for "quite serious symptoms — not one, but multiple," but would not provide further details out of fear that it might reveal identifying information to the administration.

The school, which has mandated masks on campus, struck a partnership with the state to provide testing at a local health outpost, private providers and two local pharmacies, but results can take up to a week, according to faculty and reports in the Journal-Constitution. There is reportedly no mechanism in place to compel students or employees to report results to the school, so public statistics are derived entirely from self-reported cases.

Brooks told the Atlanta paper that the spike traced to students who were overexcited after returning to campus in August.

"They get off campus and relax their methods of masking and social distancing," he said.

However, faculty members told Salon that the school had reneged on its promise that fraternity and sorority rushes, held before classes start, would not occur in person. Furthermore, students weren't required to be tested before arriving.

The school did install distanced desks and tables in classrooms as well as plexiglass barriers, and loaded up on hand sanitizer — though it is still not available in all classrooms.

"Rooms are only cleaned once a day, and many of us still don't have hand sanitizer in the classroom," a professor said. "There was none in buildings for first two weeks."

"It's not easy to take collective action here. As you can imagine, many are afraid to speak up for fear of retaliation," the tenured faculty member said. "But the lack of ethics and of general humanity is stunning. And apparently it's largely about housing revenue."

Rolling Stone reported Aug. 11 that it had seen documents that a property-management company called Corvias had pressured the Board of Regents of the University System of Georgia not to impose limits on dorm capacity this fall.

In response to the letter, Rolling Stone reported, the Board of Regents considered directing at least one school, Georgia State University, to lift its 75% occupancy cap on all dorms controlled by Corvias.