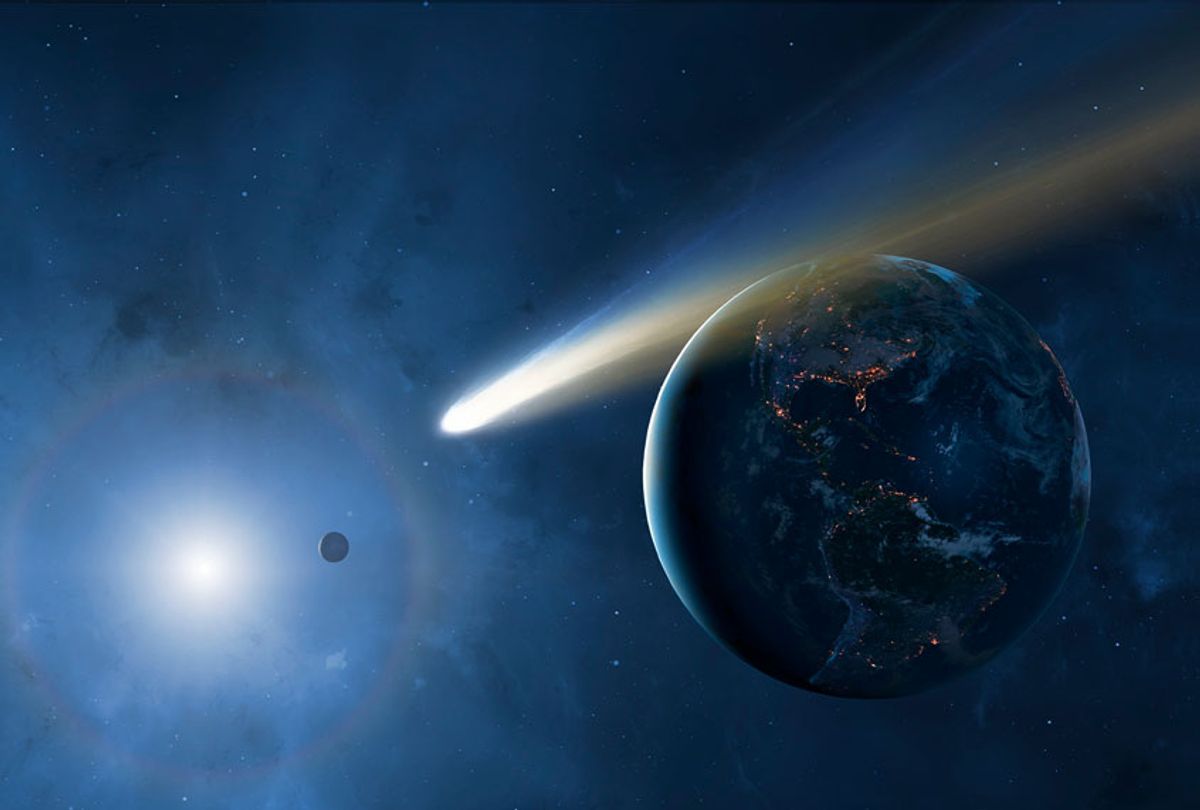 Illustration of the Earth, Moon and Sun showing a passing comet (Getty Images)
--

A new study reveals that clumps of bacteria managed to survive on the outside of the International Space Station — completely exposed to the harsh conditions of outer space — by hiding and then thriving under the remains of dead bacteria.

Japanese scientists learned this while performing an experiment meant to test the panspermia hypothesis, the idea that spores and other forms of microscopic life may be able to spread organisms from one planet to another by somehow finding a way to survive the extreme temperatures, high radiation levels and airless, nutrient-free conditions of outer space. In their recent article published in Frontiers in Microbiology, scientists describe how they placed dried cell pellets of the bacteria Deinococcus spp., which has a high level of resistance to ionizing radiation, in aluminum plate wells that were then attached to exposure panels on the International Space Station's exterior.

"We exposed the microbial cell pellet with different thickness to space environments," the authors write. "The results indicated the importance of the aggregated form of cells for surviving in harsh space environment. We also analyzed the samples exposed to space from 1 to 3 years. The experimental design enabled us to get and to extrapolate the survival time course and to predict the survival time of D. radiodurans. The results supported the concept of the massapanspermia if other requirements are met, such as ejection from the donor planet, transfer, and landing." Massapanspermia refers to the specific idea of microbial transfer between planets.

Specifically, the scientists found that the Deinococcus bacteria were able to form tiny balls, sometimes only as thick as five sheets of paper, and that the organisms in the center of the ball managed to survive even as the ones on the outside perished. Although all of the bacteria in the pellets that were only 100 micrometers thick died, roughly 4 percent of the microbes from the pellets that were 500 and 1,000 micrometers thick managed to survive by protecting themselves with the remains of their deceased companions.

The most immediate implications of the study involve possible travel from Earth to Mars or vice versa.

"Accordingly, Deinococcal cell pellets in the sub-millimeter range would be sufficient to allow survival during an interplanetary journey from Earth to Mars or Mars to Earth," the authors write. "Cell pellets of 1,000 micrometer diameter would be able to survive the shortest travel time in space."

This is not the first time that scientists have taken an interest in microbial survival in space. Last year scientists published an article in the journal Microbiome which analyzed the composition of the various microbes and fungi that lived on the International Space Station. It found that the most prominent bacteria were Staphylococcus, Pantoea and Bacillus. This research was important in terms of assessing human health during lengthy travel through space.

"Specific microbes in indoor spaces on Earth have been shown to impact human health," Kasthuri Venkateswaran, a senior research scientist at NASA's Jet Propulsion Laboratory who helped co-author the paper cataloguing the microbes, said in a statement at the time. "This is even more important for astronauts during spaceflight, as they have altered immunity and do not have access to the sophisticated medical interventions available on Earth."