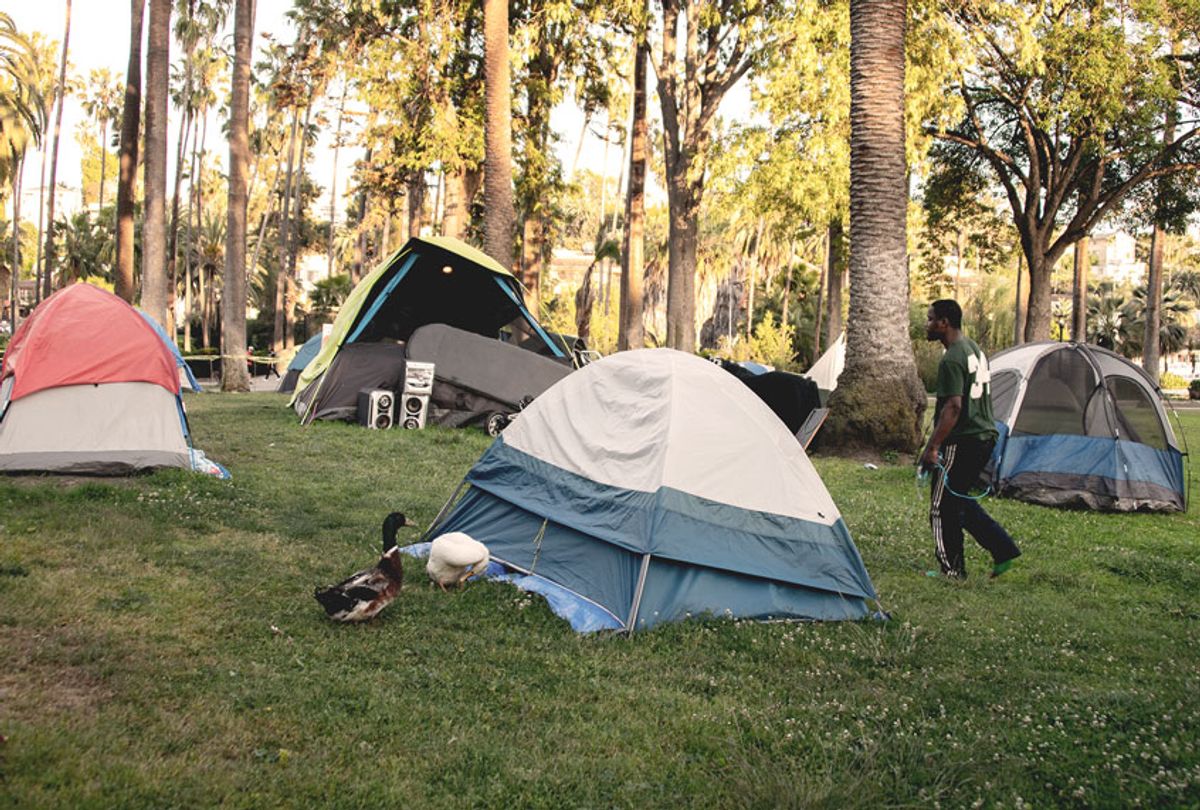 As if the Bay Area's homeless population weren't already facing a massive health threat from the pandemic, a series of wildfires in Northern California have cast an apocalyptic haze of smoke over the Bay Area. Days of lingering wildfire smoke have put the region's homeless population in yet another compromising situation that could have seriously damaging health effects for those without homes who are constantly exposed to the smoky air.

While varying winds have given a few days of respite from the pollution, the Bay Area's air quality has been considered "unhealthy" for nearly two weeks now. On Friday afternoon, smoky air from the CZU Lightning Complex wildfire stalled over the San Francisco Bay Area, extending an air quality warning through the weekend. In some areas, parts of San Francisco reached an Air Quality Index (AQI) of 465 on Friday afternoon. Any figure above 100 is considered "unhealthy for sensitive groups." Over 150 is considered to be unhealthy for everyone.

Specifically, AQI measures how much "particulate matter" is in the air. These microscopic pieces are too small to be filtered by our lungs, because they're smaller than a hair follicle. Hence, due to their size, particulate matter poses a health risk to anyone breathing it, and can cause damage deep in the lungs and worsen existing respiratory health conditions.

It is impossible for many homeless people who have been living on the streets to escape the unhealthy air. In normal times, the region's homeless outreach team would be out in the streets offering water, masks, and access to shelters with filtered air. But shelters now come with the added risk of coronavirus: multiple congregate shelters in the Bay Area have had coronavirus outbreaks, as Salon has reported, and are either closed or have limited capacity due to the pandemic.

Gwendolyn Westbrook, who leads the United Council of Human Services in San Francisco, a supportive permanent housing program, told Salon she has done outreach to people living in tents in San Francisco.

"I know most of the people who are on the streets are trying to stay inside their tents because of the smell," Westbrook said. "It has had a devastating effect on everybody, really."

Westbrook added that the wildfire smoke has made the homeless plight even worse.

"I try to make sure that they have their face coverings on, which they've been excellent about," Westbrook said. "Everything is so hard on the people who are homeless nowadays."

Inhaling wildfire smoke, as Salon has reported, can alter a person's immune response, perhaps making them even more vulnerable to the coronavirus. For the sheltered population, who have better health than homeless people, this is certainly problematic. In 2017, respiratory-related ER visits doubled after a smoke season in Montana. But it's even more troubling for the homeless population, who are more likely to have poor health.

"Homelessness creates new health problems and exacerbates existing ones," the NHCHC reported in a 2019 report. "Living on the street or in crowded homeless shelters is extremely stressful and made worse by being exposed to communicable disease (e.g. tuberculosis, respiratory illnesses, flu, hepatitis, etc.), violence, malnutrition, and harmful weather exposure."

Researchers previously suspected that more people die when there is more particulate matter in the air since it can trigger asthma attacks and heart attacks. According to data from 2019, 42 percent of unsheltered chronically homeless people in Alameda County in California have at least one chronic health problem. A lack of access to regular health care, in addition to being without safe and stable housing, factor into why researchers suspect that the average life expectancy for homeless people is between 17 and 26 years shorter than the general population. Researchers predict the number and severity of wildfires in the U.S. in the coming years could mean a rise in smoke-related deaths; as many as 44,000 per year by 2100. Certainly, the most vulnerable populations will be affected the most.

Adding a respiratory pandemic to what we already know about the homeless population's overall health, plus wildfire smoke, and the bigger picture is disconcerting.

"There's definitely a concern that if people were to get coronavirus, first of all the smoke would worsen their oxygenation — or, you know, worsen their health even further, and there's another concern that because the way people's bodies respond to smoke, often with a cough, that that could increase transmission," Kushel said.

Westbrook said the wildfires are just "another thing they have to try and survive," adding that there are ways for people to help despite the pandemic creating physical barriers.