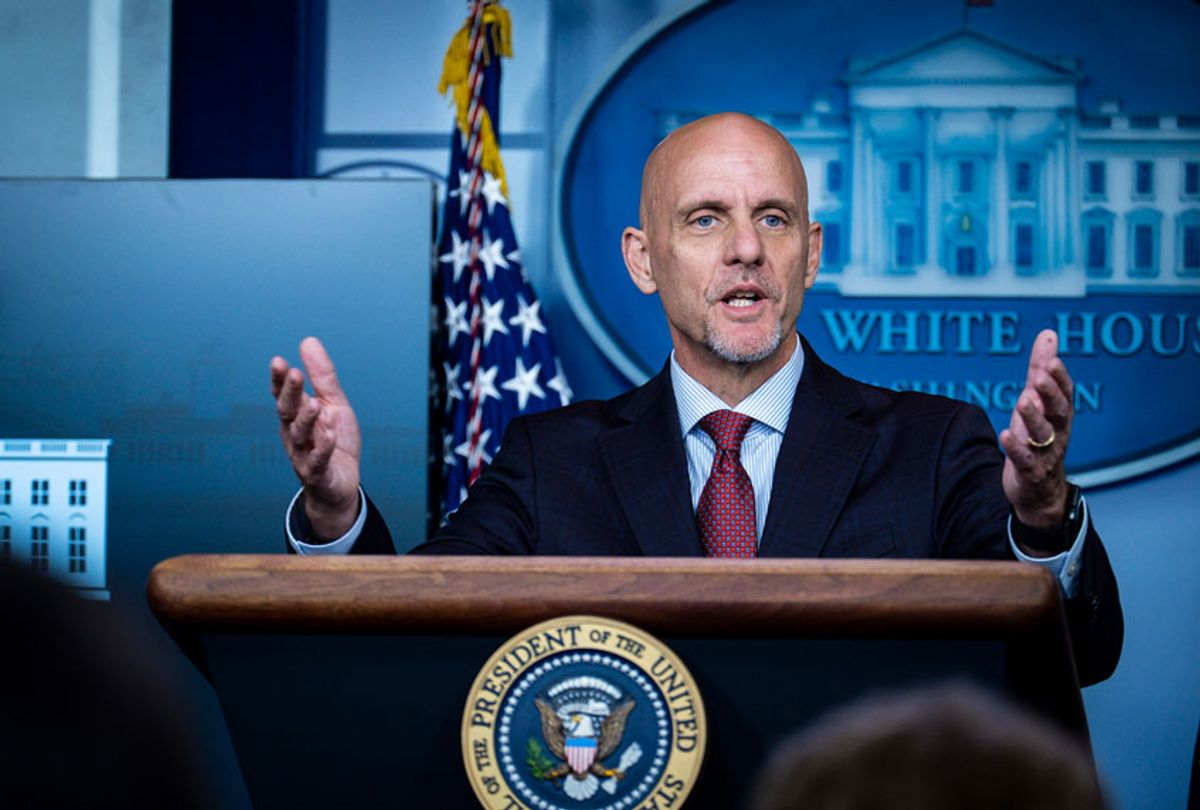 FDA Commissioner Stephen Hahn addresses the media during a press conference in James S. Brady Briefing Room at the White House on on August 23, 2020 in Washington, DC. President Donald Trump announced that the Food and Drug Administration is issuing an emergency authorization for blood plasma as a coronavirus treatment The move by the FDA comes after President Trump accused the FDA of slow-walking the therapy to harm his reelection chances. (Pete Marovich/Getty Images)
--

The National Institutes of Health released a statement Tuesday undercutting the Food and Drug Administration's emergency authorization of convalescent plasma for use in COVID patients, extending the controversy that has simmered among health officials since the FDA announced the authorization more than a week ago.

After an NIH panel of experts reviewed the available evidence on convalescent plasma — including the FDA's analysis — the agency sharply dissented from the FDA's conclusion, finding instead that "there are currently no data from well-controlled, adequately powered randomized clinical trials that demonstrate the efficacy and safety of convalescent plasma for the treatment of COVID-19."

While convalescent plasma treatments rarely trigger serious side effects, the NIH could not say whether the treatment might make patients more susceptible to reinfection.

The contradiction extends the fallout from the FDA's initial rollout of the authorization, which medical experts saw as politically charged and carrying information that was "grossly misleading."

FDA chief Dr. Stephen Hahn was sharply criticized last Sunday for remarks he made at the press conference, during which he stood next to President Trump and echoed the president's misleading statements about the treatment. Hahn later personally apologized and clarified those comments, calling the criticism "entirely justified."

Miller had tweeted the same misinformation from the press conference but did not apologize, and last Thursday evening, the night before she was fired, she again tweeted misleading information about convalescent plasma — this time from her personal account in a partisan context: Quoting Trump in real time from his acceptance speech during the Republican National Convention.

"'Convalescent plasma will save thousands and thousands of lives.' — Pres. Trump," Miller wrote, tagging the tweet #COVIDー19 and #RNC2020Convention.

Hours before she posted that tweet, the FDA's parent agency, the Department of Health and Human Services, terminated its contract with public relations consultant Wayne Pines, the New York Times reported. Pines said he had told Hahn — a friend of his — to correct the misleading statements he made during the press conference with Trump.

Salon's emailed questions regarding the role in these events of Health and Human Services lead spokesperson Michael Caputo — a GOP operative, longtime Trump ally and Roger Stone confidant who was brought on in April, after tweeting racist attacks and politicized conspiracy theories about the pandemic — were routed by a department spokesperson directly to Caputo, who did not immediately reply.

Robert Califf, FDA commissioner under former President Barack Obama, said that in making a premature announcement, the FDA appeared to have been trying to reach a foregone conclusion.

"If you just took random data and divided it into enough subgroups just by chance alone you would find differences," he told Bloomberg. "It's so enticing when you see it, but it really is just hypothesis," Califf added. "We don't have definitive evidence one way or the other and we need to get it."

Bloomberg health reporter Anna Edney said that Califf was implying that the FDA had simply tried to "analyze the data a bunch of different ways until something works."

"The public is best served when health agencies are aligned in the kind of advice they're giving to providers and patients. Different agencies can have different interpretations of data, but the actionable advice should reflect a consensus view so patients have clear guidance," he said.