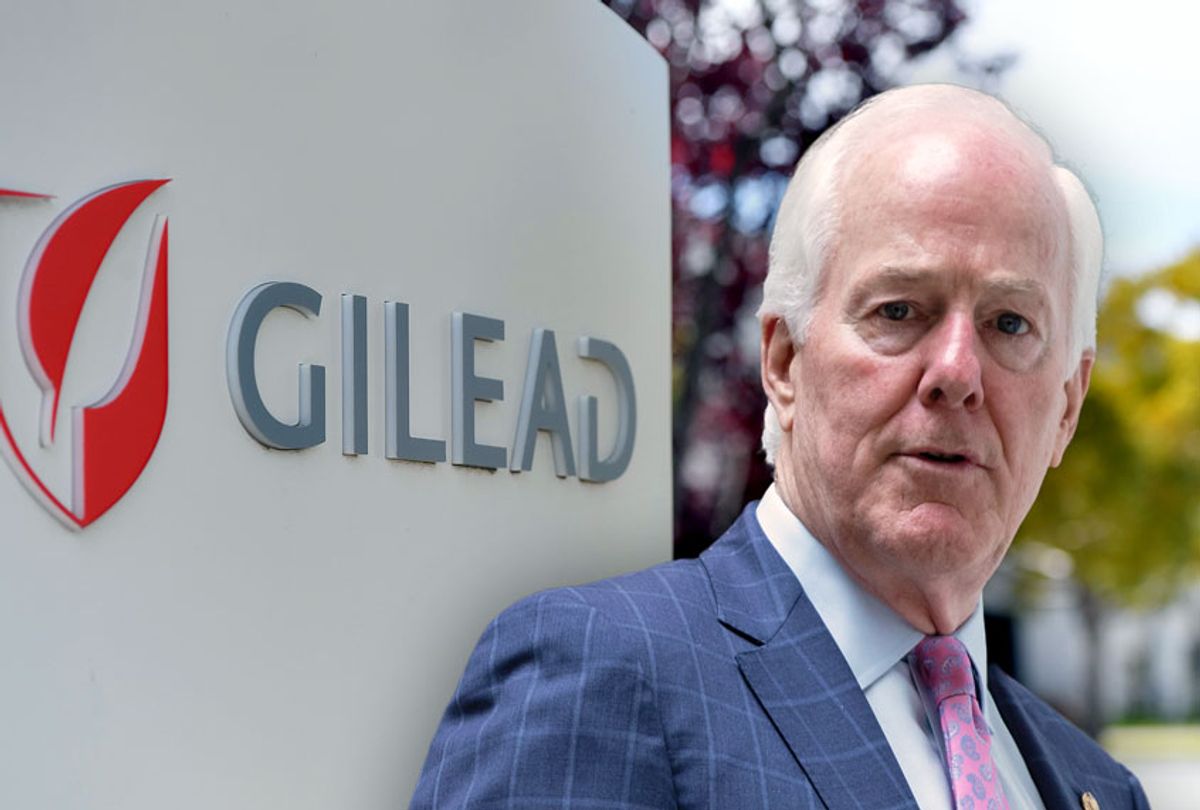 Sen. John Cornyn, R-Texas, who has repeatedly expressed doubt about the science behind the coronavirus pandemic, has political and lobbying ties to Gilead, the pharmaceutical giant behind COVID treatment remdesivir, which lobbied the Senate as lawmakers debated the CARES Act this March.

Republican senators ended up undercutting anti-price gouging language that Democrats inserted in the bill, giving leeway for companies such as Gilead — which has been widely criticized for overcharging consumers on HIV medication — to set prices that put COVID drugs such as remdesivir out of reach of many Americans likely to need them.

Democrats wanted to include that language in part because of Gilead's specific history of price gouging on lifesaving drugs such as HIV medication. Indeed, while lawmakers debated CARES Act provisions, Gilead was fighting the federal government in court over its patents for HIV drug Truvada. GoodRx, a website that helps patients save money on prescriptions, currently lists Truvada for more than $22,500 a year. The price was the subject of a congressional hearing last year.

Gilead has recently faced widespread criticism criticized for setting its price on remdesivir at $520 per dose, or $3,100 for a treatment.

Cornyn, who now finds himself facing an unusually difficult re-election bid in historically red Texas, later promoted remdesivir on his personal Twitter page three times. He has also accepted tens of thousands of dollars in donations from Gilead and the Pharmaceutical Research and Manufacturers of America (PhRMA), a lobbying group that had hired former Cornyn staff, as well as from a PhRMA lobbyist and the partner of his former chief of staff, less than a week after the CARES Act passed.

As the Senate took up CARES Act negotiations this March, Gilead — which had the year prior joined PhRMA — was spending a record amount of money on lobbying: $2.45 million in the first quarter of 2020, an increase of nearly one-third over the $1.86 million that the company spent over the same three months the year before, per federal filings reviewed by NPR.

Gilead told NPR at the time that the spending hike was related to its PhRMA membership, explaining that a slice of annual lobbying dues is typically added to first-quarter disclosures. "Nearly all" of its additional first-quarter spending was put towards PhRMA dues, a spokesperson told the outlet.

In reference to concerns about remdesivir pricing, Rep. Jan Schakowsky, D-Ill., told NPR, "We have seen one after another of these drugs come on the market, which are fantastic, except that they end up being out of reach for most consumers. We cannot tolerate as human beings, as Americans, for this to be an opportunity now for price gouging."

In first quarter of 2020, PhRMA — the lobbying firm representing Gilead — hired Marshall & Popp, LLC, to lobby the Senate on "issues related to the COVID-19 pandemic" and several specific pieces of related legislation, including the CARES Act, according to federal records.

One of those lobbyists was Monica Popp, former chief of staff in Cornyn's Senate office, who reported earning $45,000 and $54,000 for lobbying on the CARES Act and prescription drug value and price regulation, among other issues.

PhRMA also hired Crossroads Strategies, LLC, to lobby the Senate on "Education Around COVID-19 Therapies" — and one of the Crossroads lobbyists, Salim Alameddin, is a former Cornyn staffer. Alameddin's lobbying disclosures show that he lobbied on CARES Act legislation as well as "education around COVID-19 therapies."

Around that time, Gilead itself was lobbying the Senate. Cornyn, for his part, tweeted a photo of a Corona beer, making light of the pandemic that was weeks away from decimating New York City. He also attracted criticism at the time for blaming China for the outbreak.

While Democrats were able to work anti-price gouging language into the bill, GOP interests aligned with the pharmaceutical companies, adding a phrase to the CARES Act that Democrats argue undermined their efforts: "The [Health and Human Services] Secretary shall not take actions that delay the development of such products.'"

Gilead and PhRMA both declined to tell NPR whether they pushed for that wording.

The CARES Act passed March 27, with that GOP language included.

In June, Gilead — which after public backlash had to ask the FDA to revoke the seven-year monopoly it had initially staked out on the drug — said it planned to price remdesivir at $520 per dose, or more than $3,000 for a treatment. Democratic officials and public health experts blasted the company for seeking to profit unfairly.

Cornyn's campaign also reported a $1,000 donation from Hazen Marshall — the lobbying partner of Cornyn's former chief of staff — on March 31, four days after the CARES Act passed, on which Marshall had lobbied, per federal filings.

Cornyn specifically promoted remdesivir in three tweets between Apr. 29 and May 1.

"ANTHONY FAUCI ON REMDESIVIR in the Oval: The drug has a 'clear-cut, significant positive effect in diminishing the time to recover. ... We think it's really opening the door to the fact that we now have the capability of treating.' @playbookplus" Cornyn tweeted Apr. 29.

Gilead explained remdesivir's price in part because setting prices for a new drug amid a pandemic presented an unprecedented challenge, the Washington Post reported. The company said that average hospital costs cut by the treatment would save the U.S. health care system $12,000 per coronavirus patient and thereby justify the price.

An independent study found that Gilead could have recovered its costs by distributing the drug for as little as $1 to $60 per dose — or between $100 and $160 a dose, accounting for all costs in 2020.

Cornyn's office did not immediately respond to Salon's request for comment.