Violence in the streets — politics, 2020-style 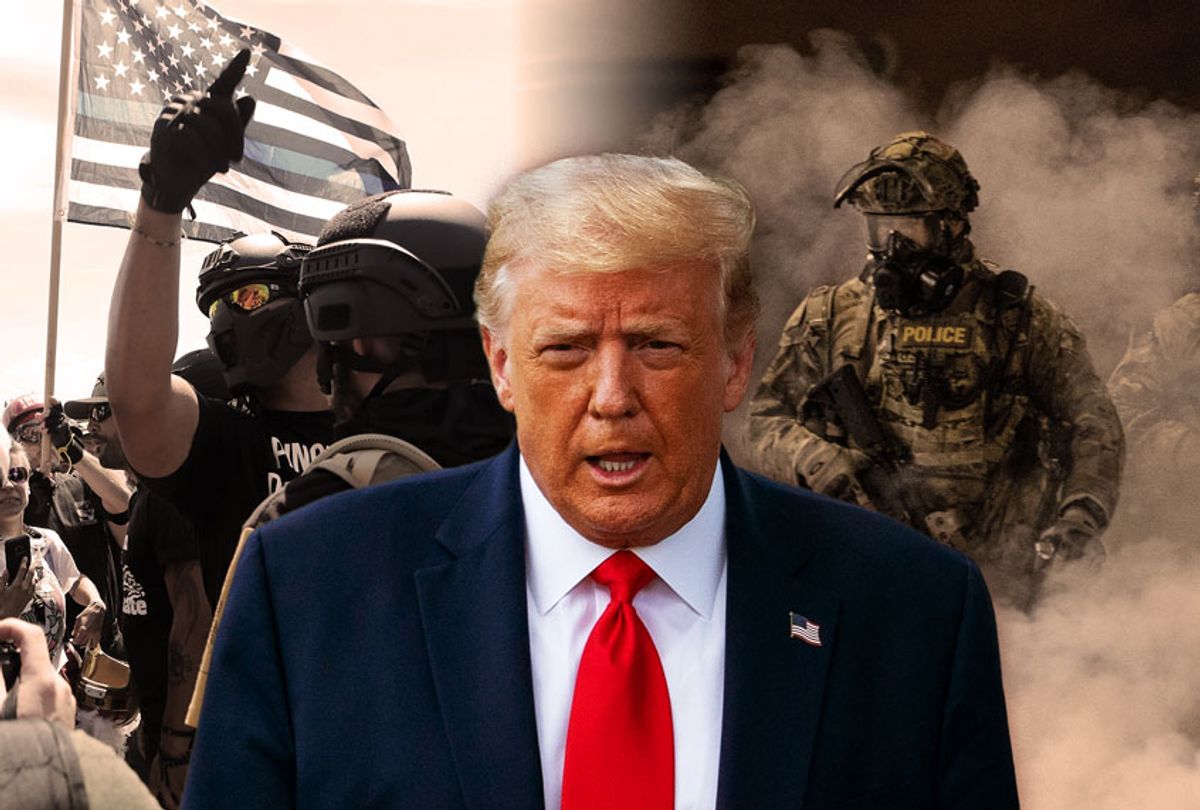 That we are in a time of great political divide is not news.

That those divides are turning physical, and sometimes dangerous, is developing as a major theme before the elections, perhaps predictably.

That we have a bunch of loose words from our candidates for president is neither calming the streets nor helping to establish credibility in government to consider the grievances of the public. Indeed, all it seems to be doing is to give the candidates platforms for more sloganeering.

Worse, the candidates don't seem to be getting at who is responsible for now nightly fighting that witnesses report are more between leftist anarchists and right-wing white supremacists than warring with police.

There are a growing number of reported clashes, real and imagined. The real ones have included the incidents in Kenosha, Wis., of course, where a white teen committed to defending police, has been charged for killing two protesters and a shooting overnight of a man in a Portland caravan who was wearing a Trump hat, and the less real one of note this week involved Sen. Rand Paul (R-Ky.), who reported that he was assaulted by a "mob," which turned out to be 100 people shouting at him and his wife.

Facts are overly short, and slogans are ruling the day. Meanwhile, ought we not be concerned that whatever violence there is in localized single blocks of different U.S. cities is spreading to fistfights over mask-wearing in stores or protests that are meant to be vocal, but specifically not violent?

For Donald Trump, peaceful protests that turn violent in the early morning hours are all from one side:  "You know what I say? Protesters your ass," Trump said to cheers at an airport rally in New Hampshire on Friday. "I don't talk about my ass. They're not protesters, those aren't protesters. Those are anarchists, they're agitators, they're rioters, they're looters."

Opponent Joe Biden, who is seen as decrying violence in too general a manner, told CNN that Team Trump is "rooting for violence" in American streets because it allows them to drive fear for political gain. Biden cited a quote from Kellyanne Conway that "the more chaos and anarchy and vandalism and violence reigns, the better news for the very clear choice on who's best on public safety and law and order."

Trump seized on the footage of protesters near the White House who gathered around Sen. Paul, who was escorted away by police.

But video of the incident appears to show a much smaller crowd that didn't touch Rand Paul or his wife, and they seem to have sustained no injuries. Actually, several videos of the incident were posted to social media; one shows a denser crowd while another video by reporter shows a smaller crowd shouting "Breonna Taylor," a Paul Kentucky constituent who was killed in a mistaken police raid into her Louisville home, and "say her name."

In any event, there was no violence here.

By contrast, nightly violence is continuing in Portland, Ore., "between a core of pro-Black Lives Matter and anti-fascist protesters and law enforcement," reports The Guardian. There is a pattern of politically polarized street violence with broadly leftwing and anti-fascist activists sometimes facing off against far-right groups.

Last weekend, a right-wing "Say No to Marxism in America" rally — including members of far-right groups like the Proud Boys—saw serious, widespread violence directed not only at leftist counter-protesters, but also reporters. One right-wing protester drew a firearm, others carried knives and guns, some had wooden shields with nails driven through.

The Washington Post recorded exchanges from Kalamazoo, Mich., and Bloomington, Ind., to Chicago and Portland, with people on both sides of the divide punching and beating each other, often with police appearing to be little more than observers. Some of the violence has been linked to pro-gun groups and far-right extremist organizations.

In Weatherford, Texas, heavily armed protesters, including members of several far-right Texas-based groups, clashed with demonstrators seeking removal of a Confederate statue from the grounds of the Parker County Courthouse. The next day, brawls erupted at a local campaign event in Tyler, 100 miles east of Dallas. A week later, police were called to break up a gathering of hundreds of motorists, many flying Trump and Confederate flags, who descended on a historical Black church in Dallas that displays a two-story Black Lives Matter sign.

This week, in central Pennsylvania, a man marching from Wisconsin to D.C. for this week's anniversary of the 1963 March on Washington was shot and wounded. Protesters have also been shot, in some cases fatally, A group of people berated customers at D.C. restaurants this week who refused to raise their fist in solidarity with the Black Lives Matter movement, though the confrontations were nonviolent.

Trump and Vice President Mike Pence have made much of spreading fear of violence in Joe Biden's America but taking no responsibility for violence in Trump's America. More, they are pointedly singular-focused on violence that arises from protest from Black Lives Matter and other left causes, without seeing participation by right-wing groups.

As president, Trump's remarks in New Hampshire underscore that he is not even distinguishing between peaceful, lawful protest and "looting." He is more focused on protecting the rights of gun-toting thugs than he is on whether there is any intelligent discussion of policing abuses, systematic racism or the dozens of questions raised by street protests.

Biden and Vice Presidential candidate Kamala Harris are getting hit by not being vocal enough, while winning some political points for actually paying attention to what the protests are about.

"We are not just a polarized society — we are increasingly a confrontational society now,"  Mark Pitcavage, a historian and senior research fellow at the Anti-Defamation League's Center on Extremism told The Washington Post.

As voters, we ought to be doing more, and demanding that leaders do more to make the divide more debate than physical confrontation.