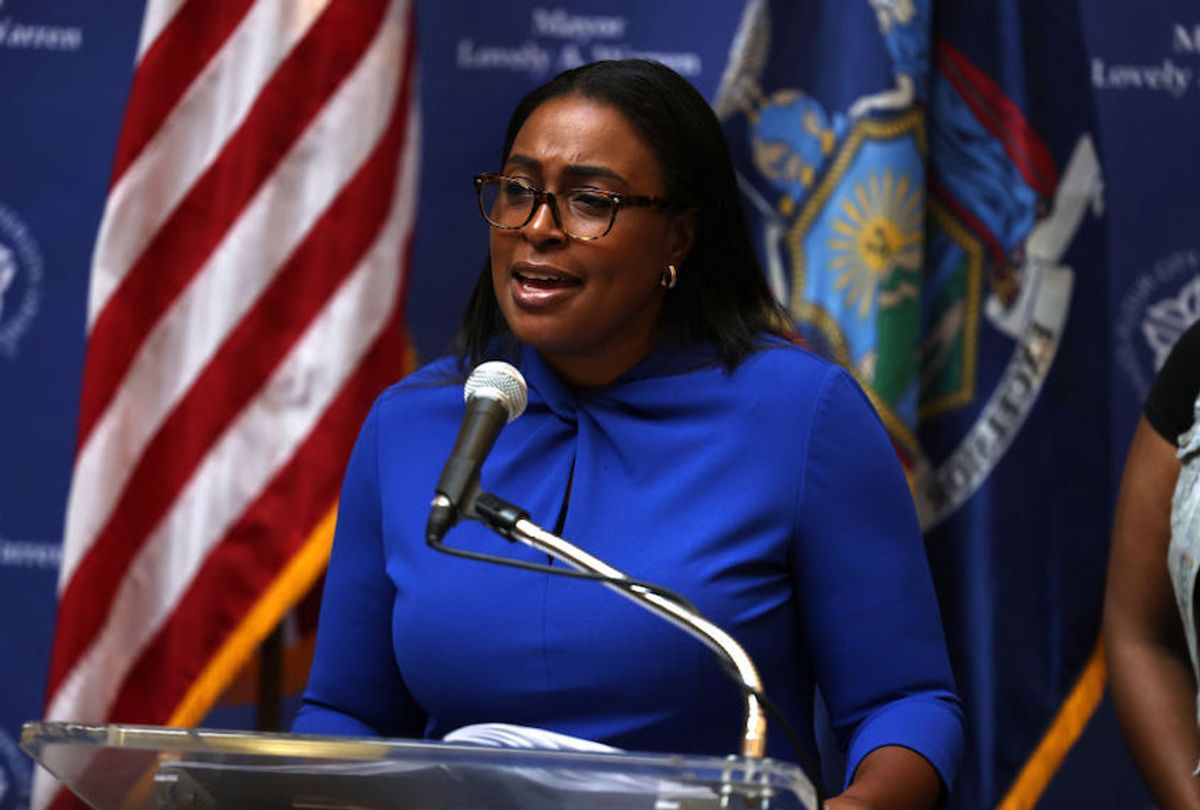 Lovely A. Warren, mayor of Rochester, speaks during a press conference on the death of Daniel Prude on September 03, 2020. (Michael M. Santiago/Getty Images)
--

Seven police officers in Rochester, N.Y., involved in the death of a Black man who died after being suffocated by officers in March were suspended on Thursday.

Rochester Mayor Lovely Warren announced the suspensions in a news conference and apologized to the family of Daniel Prude, who she said was failed "by our police department, our mental health care system, our society. And he was failed by me."

Warren said she made the decision against the advice of attorneys.

"I understand that the union may sue the city for this. They shall feel free to do so," she said.

Prude, 41, died on March 30, a week after officers put a hood over his head and pressed his face into the pavement for two minutes, according to body camera footage released on Wednesday.

The death received little attention at the time until his family held a news conference this week. Prude's brother, Joe Prude, told reporters that he had called police for help because his brother was having a mental health episode.

"I placed a phone call for my brother to get help. Not for my brother to get lynched," Joe Prude said. "How did you see him and not directly say, 'The man is defenseless, buck naked on the ground. He's cuffed up already. Come on.' How many more brothers gotta die for society to understand that this needs to stop?"

The video shows Prude, who had removed his clothes, seemingly complying with police commands while shouting at officers.

Officers put a white "spit hood" over his head, which is used to protect officers from a detainee's saliva, and handcuffed him.

Prude demands the officers remove the hood before they slam his head into the ground.

"Trying to kill me!" Prude is heard saying while officers insist he "calm down."

Prude was held down for about two minutes, according to the video, and had to be revived at the scene. He died a week later after he was taken off life support.

A medical examiner ruled his death a homicide caused by "complications of asphyxia in the setting of physical restraint." The report also said that excited delirium and acute intoxication by phencyclidine, or PCP, were contributing factors.

Warren did not say why it took five months to take action in response to the death but seemed to blame Police Chief La'Ron Singletary for misleading her about the incident.

"Experiencing and ultimately dying from the drug overdose in police custody, as I was told by the chief, is entirely different than what I ultimately witnessed, on the video," she said.

Singletary insisted that it was "not a cover-up," according to The New York Times.

"Our job is to try to get some sort of medical intervention, and that's exactly what happened that night," he said, adding that he stood by his officers' actions.

Attorney General Letitia James vowed a "fair and independent investigation" on Wednesday. James' office took over the probe in April.

"We will work tirelessly to provide the transparency and accountability that all our communities deserve," she said in a statement.

New York Gov. Andrew Cuomo called the video "deeply disturbing" and called for the "case to be concluded as expeditiously as possible."

Prude, a Chicago resident, was in town to visit his brother but began acting erratically and making paranoid and suicidal statements, according to his brother.

"He jumped 21 stairs down to my basement, head first," Joe Prude told the police, according to the Times.

He said he had his brother admitted to a hospital for evaluation but he was released hours later. Shortly after returning to the home, Daniel Prude fled out the back door.

Body camera footage shows an officer pointing a Taser at Prude after tracking him down and Prude appears to comply with all commands. Officers can be heard chuckling at his erratic statements.

"Give me your gun. I need it," Prude said at one point in the video.

"Sir, you don't got AIDS, do you?" one of the officers asked.

Prude spit on the ground several times, though not at the officers, prompting one of the officers to put a white hood on him. After pushing his face into the ground for two minutes, one officer asks, "you good, man?"

A paramedic later performed CPR on Prude while he remained handcuffed before taking him in an ambulance.

The video prompted protests in Rochester and a brief clash between demonstrators and police.

"My father should have been met with a mental health specialist. He should not have been killed in the street," his 18-year-old daughter, Tashyra Prude, told The Associated Press. "He did not deserve that. He was treated like an animal. And I want this to be a step toward justice for not only my father, but justice for people like Breonna Taylor, who were killed by the police."