Bill Barr "is playing with fire"

He accuses his opponents of undermining the integrity of the election, but he appears to be lying and misleading 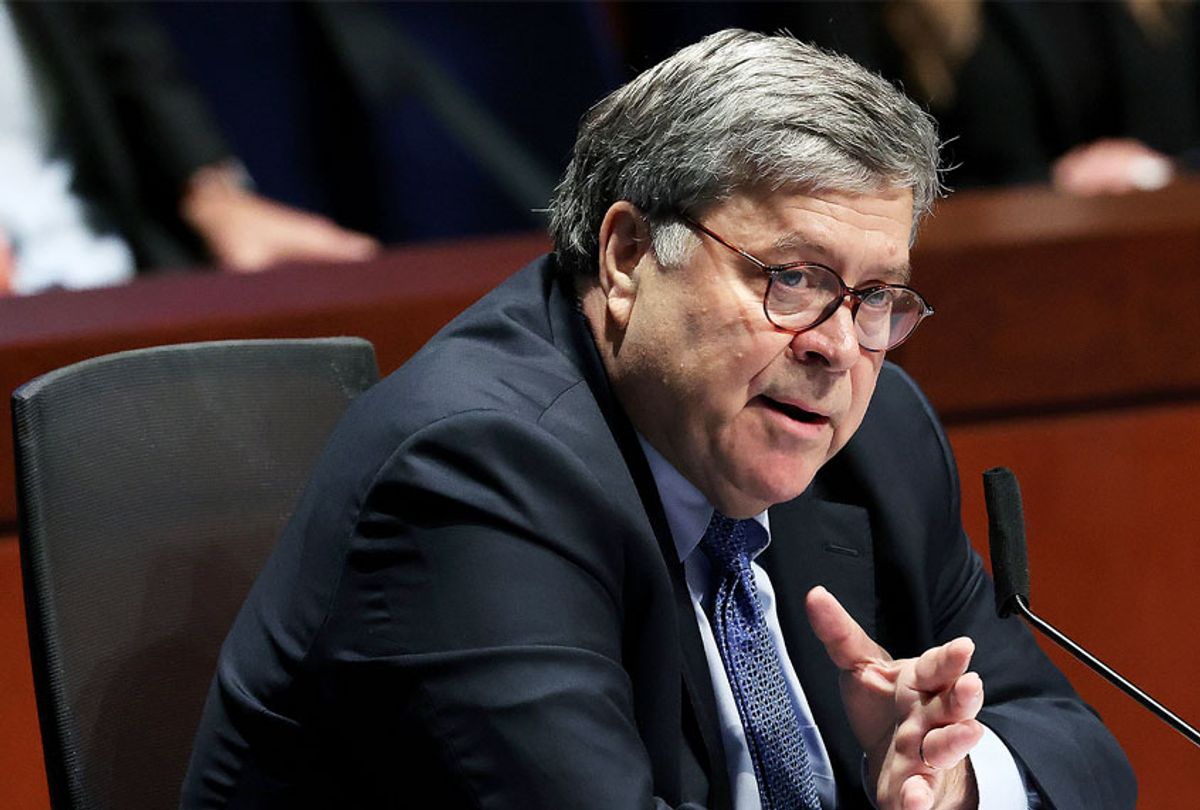 When CNN's Wolf Blitzer challenged Bill Barr's fearmongering about mail-in ballots in an interview on Wednesday, the attorney general had no credible counterargument. So instead of responding with a coherent explanation, he had an emotional outburst.

"This is playing with fire!" Barr spat back at Blitzer, who remained calm throughout the exchange. "We're a very closely divided country here. And if people have to have confidence in the results of the election and the legitimacy of the government, and people trying to change the rules to this methodology, which, as a matter of logic, is very open to fraud and coercion, is reckless and dangerous."

Barr's appeal to "logic," here, like his emotional outburst, was another sign that his complaints weren't on the level. He appealed to "logic" because he had little evidence. At one point, though, he did try to cite some evidence indicating mail-in voting was susceptible to fraud.

"For example, we indicted someone in Texas, 1,700 ballots collected, he — from people who could vote, he made them out and voted for the person he wanted to," Barr said. "OK?"

No, it's not OK — because this didn't happen. As the Washington Post reported on Thursday, Barr had his facts entirely wrong:

Federal prosecutors brought no such indictment. And while a Justice Department spokeswoman said Barr was referring to a local prosecution involving suspected mail-in voting fraud in a city council election, the assistant district attorney on that case said Barr's description doesn't match the facts.

"That's not what happened at all," said Andy Chatham, who is now in private practice.

There were indeed suspicions that 1,700 ballots may be fraudulent — but after an investigation, there was little evidence of misconduct. The report continued:

"We didn't find any evidence of widespread voter fraud, and instead the ballots that were returned were consistent with the voter's choice," Chatham said.

A 28-year-old man named Miguel Hernandez ultimately pleaded guilty in the case to improperly returning a marked ballot. According to local news reports at the time, a woman identified Hernandez as the man to whom she had given a blank ballot she placed in a white envelope but had not signed. Bruce Anton, Hernandez's defense attorney at the time, said that as best he could remember, Hernandez was hired by others to canvass neighborhoods for mail-in ballots, which he would then turn over to those who hired him for possible alteration. He said that, on a good day, Hernandez might collect 12 ballots. "1,700? Not a prayer in the world," Anton said.

Mike Snipes, the No. 2 prosecutor in the office then, said investigators initially suspected there were "potentially 1,700 fraudulent ballots, but we did not uncover that, at all."

"We actually thought there was voter fraud initially, and we couldn't find it except that little tiny case," he said.

A Justice Department spokesperson admitted to the Post that Barr had the facts wrong: "Prior to his interview, the Attorney General was provided a memo prepared within the Department that contained an inaccurate summary about the case which he relied upon when using the case as an example." This isn't the first time Barr has wildly botched the facts in support of his preferred narrative. He recently claimed that a DOJ program had led the FBI to arrest 200 people in Kansas City — the real number of arrests was one.

Will the attorney general adjust his beliefs — or his attitude — on voter fraud, given the paucity of evidence for his claims? Don't count on it.

But what's really notable is that he's doing exactly what he claims his critic of doing. He warns that changing the rules around mail-in voting — which already vary widely state to state and are understandably being revised in light of the pandemic — is somehow a threat to voter trust in the election. Yet despite his claims, mail-in votes have an extremely reliable track record and are resilient against fraud. The biggest concern with mail-in ballots is actually that too many legitimate votes may be rejected in an attempt to root out fraud, rather than that illegitimate votes might be accepted. But this concern can be ameliorated by public education, and it's certainly not solved by limiting mail-in voting from people who might otherwise not vote at all. The attorney general and other administration officials should be focused on providing enough information and options to people so they can easily exercise their right to vote.

Instead, the president is relentlessly fomenting fears that the election is going to be rigged, while sending clear signals that he will fight an election loss with every tool he has. This is the biggest threat to the integrity of and public faith in the election result. And Bill Barr is helping Trump with this aim by spreading false information about non-existent cases of voter fraud. He should, at the very least, apologize — but he won't.

Trump and Barr's rhetoric also plays into the hand of Russia, which ABC News reported on Thursday is likewise pushing dubious claims about voter fraud in the U.S. This fact is particularly striking because Barr, in the same CNN interview, claimed that China is a much more serious threat to the election than any other country, and he downplayed the significance of the Russian threat.

"I've seen the intelligence, too, and have been briefed by the intel community's top China and Russia experts," said New Jersey Democratic Rep. Tom Malinowksi in response to Barr's claims. "Barr is lying here. And there is no good reason why more of the information we've both seen can't be released publicly so the American people can judge for themselves."

But the intelligence community has said no such thing, according to public statements by the country's top counterintelligence official Bill Evanina and multiple sources who have seen the underlying intelligence. And national security officials and others briefed on the latest election threat intelligence are now expressing concern that the Trump administration is trying to draw attention away from the more acute threat posed by Moscow, which is again trying to boost Trump's reelection, they said.

"China is the bigger and longer term threat to U.S. national security," said an official who has seen the underlying intelligence. "But it does not pose the most acute threat to this election. Russia does."

So on multiple fronts, Barr appears to be lying to and misleading the American people about the 2020 election. In doing so, he's playing into Russia's hands. And while he accuses his opponents of undermining the integrity of the election, he's truly the one who is "playing with fire."