Trailing in the polls and sneering at fallen warriors, Donald Trump dreams of a new civil war, fought by buffoons 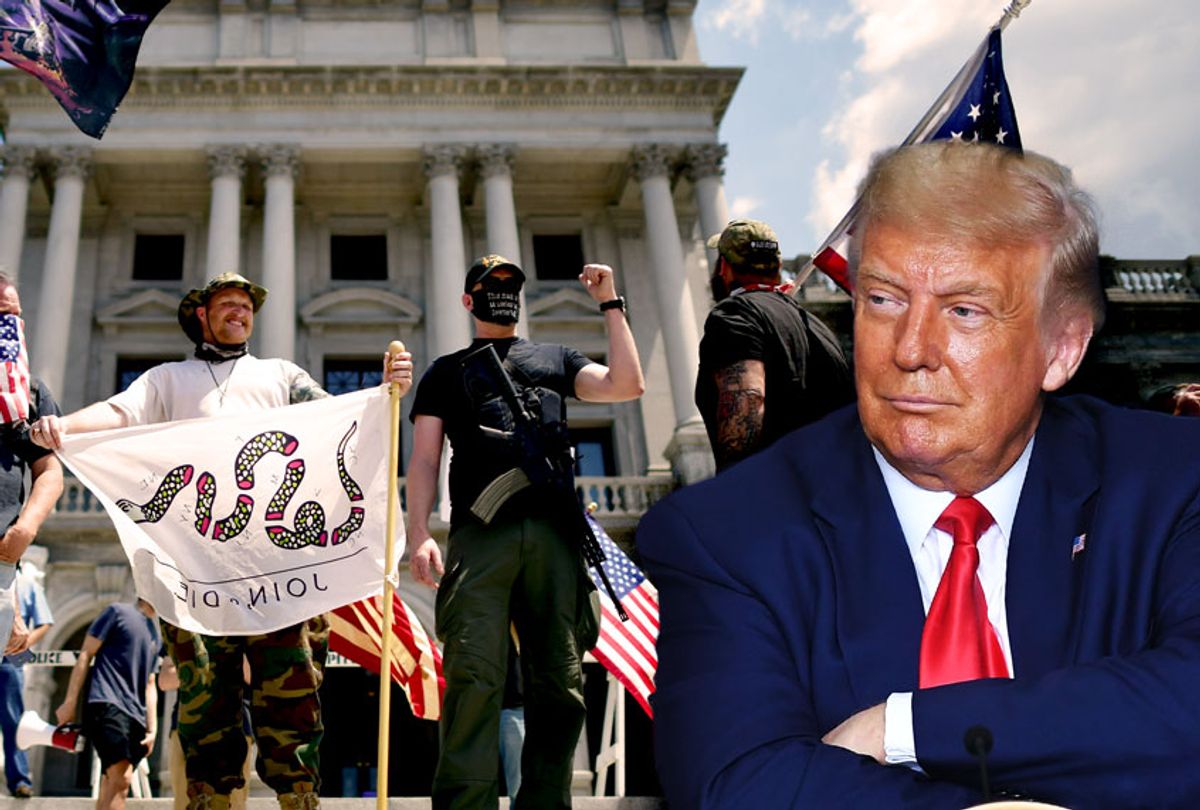 Donald Trump | Trump supporters and a man with an assault rifle join demonstrators outside the Pennsylvania Capitol Building to protest the continued closure of businesses due to the coronavirus pandemic on May 15, 2020 in Harrisburg, Pennsylvania. (Photo illustration by Salon/Getty Images)
--

Donald Trump is surrounded by suckers and losers. Every night when he goes to bed in the White House, they're all around him. There is a hillside full of "losers" a couple of miles away across the Potomac River, buried at Arlington National Cemetery. The names of 58,000 "losers" are engraved into the black marble wall of the Vietnam Veterans Memorial only a mile away down Constitution Avenue.

There are memorials to more suckers and losers on the Mall. The Korean War Memorial is just across the reflecting pool near the Lincoln Memorial. It pays homage to the 36,000 "losers" and "suckers" who died and the tens of thousands more who served in that conflict. The World War II Memorial is a short distance away, just off 17th Street, not far from the South Lawn of the White House where Trump spoke on the last night of his convention last week. The World War II memorial commemorates the 405,000 "losers" who gave their lives in the fight against Nazism and the millions more who served that cause.

The Vietnam Women's Memorial on the Mall depicts three uniformed women with a wounded soldier, another of Trump's "losers," the kind of disabled soldier Trump has said he doesn't want to participate in any of his parades because seeing such a "loser" might make people uncomfortable.

Jeffrey Goldberg of The Atlantic did us the favor this week of reminding us what Donald Trump really thinks of the active duty men and women currently serving in our armed forces, and of the veterans who served before them. "Why should I go to that cemetery? It's filled with losers," he quotes Trump as saying in 2018 when he refused to visit the Aisne-Marne American Cemetery near Paris. Trump blamed rain that day for the cancellation of his visit, claiming that his "helicopter couldn't fly." He claimed that the Secret Service agents who protect him wouldn't drive him to the ceremony at the cemetery. "Neither claim was true," Goldberg reminds us in The Atlantic. "In a separate conversation on the same trip, Trump referred to the more than 1,800 marines who lost their lives at Belleau Wood as 'suckers' for getting killed," Goldberg reports.

"Losers" and "suckers." That's what Trump calls the men and women who have given their lives in war defending this country and fighting against the forces which would destroy us. He's done it before.

"We're not going to support that loser's funeral," Trump told aides when Sen. John McCain died in August of 2018. "He became furious," Goldberg reports, "when he saw flags lowered to half-staff. 'What the fuck are we doing that for? Guy was a fucking loser,' the president told aides." McCain served as a pilot in Vietnam and was shot down by enemy fire. He spent five and a half years as a prisoner of war in North Vietnam before being released along with 108 other prisoners in 1973. McCain is "not a war hero," Trump said in 2015 during his campaign for the Republican nomination for president. "I like people who weren't captured."

According to Goldberg's report, Trump has referred at least twice to former President George H.W. Bush as a "loser" for being shot down when he was a Navy pilot in World War II. In 2017 while on a Memorial Day visit to Arlington National Cemetery with John Kelly, who was then secretary of homeland security, Trump turned to Kelly — at the grave of Kelly's son, Lt. Robert Kelly, who was killed in Afghanistan in 2010 — and said, "I don't get it. What was in it for them?"

"He can't fathom the idea of doing something for someone other than himself," a retired general and friend of Kelly told Goldberg. "He just thinks that anyone who does anything when there's no direct personal gain to be had is a sucker. There's no money in serving the nation."

Donald Trump is, shall we say, less than impressed by the soldiers and sailors and Marines and airmen and women who have served their country in the United States military. But he gave us an idea of who he is impressed by: Kyle Rittenhouse, the 17-year-old Illinois resident who shot and killed two protesters and wounded one at a Black Lives Matter demonstration last week in Kenosha, Wisconsin. Rittenhouse was captured on cell phone video doing all three shootings and has been charged with multiple felonies, including intentional homicide and attempted homicide.

Asked at a White House press conference on Monday if he would "condemn the actions of vigilantes like Kyle Rittenhouse," Trump instead slammed "left-wing violence" as "out of control" and "terrible."

"You saw the same tape as I saw," Trump said, referring to the cell phone video that has appeared all over the internet. Referring to Rittenhouse in the videos, Trump claimed, "He was trying to get away from them, I guess; it looks like. And he fell, and then they very violently attacked him. And it was something that we're looking at right now and it's under investigation. But I guess he was in very big trouble. He would have been — I — he probably would have been killed." The "violent" protesters Trump is referring to were unarmed.

Rittenhouse was part of a group of self-proclaimed armed militia that claimed to be protecting businesses during the protests which had previously burned and damaged some buildings in downtown Kenosha. Trump has previously praised armed militias that occupied the Michigan State Capitol during protests in favor of reopening the economy after shutdown orders had closed businesses and schools during the early days of the coronavirus outbreak in the spring. Trump tweeted "LIBERATE MICHIGAN!" "LIBERATE MINNESOTA!" and "LIBERATE VIRGINIA!" in support of demonstrations in three states whose governors had issued shutdown orders.

So while Trump cheers on ragtag groups of heavily armed civilians garbed in make-believe camo uniforms and Kevlar helmets and other surplus gear like bulletproof vests and pretend "tactical" gloves, the real soldiers wearing government-issued uniforms, carrying government-issued rifles, serving in harm's way overseas, risking their lives for their country — they are Trump's "losers" and "suckers."

Unfortunately for Cadet Bone-Spurs, he's losing the suckers and losers. A poll released this week by Military Times found that 50 percent of active duty military members have an unfavorable view of Trump, with only 38 percent approving of him. The military supports Joe Biden for president over Trump by four percentage points. Hillary Clinton, by comparison, lost to Trump in 2016 among service members by nearly two to one.

If the suckers and losers who surround the White House could vote, I think I know which way they would go.