I'm a Black woman, not a "woman of color." Here's why I make that distinction

Our fights and struggles are not the same as other women's, even in diverse circles 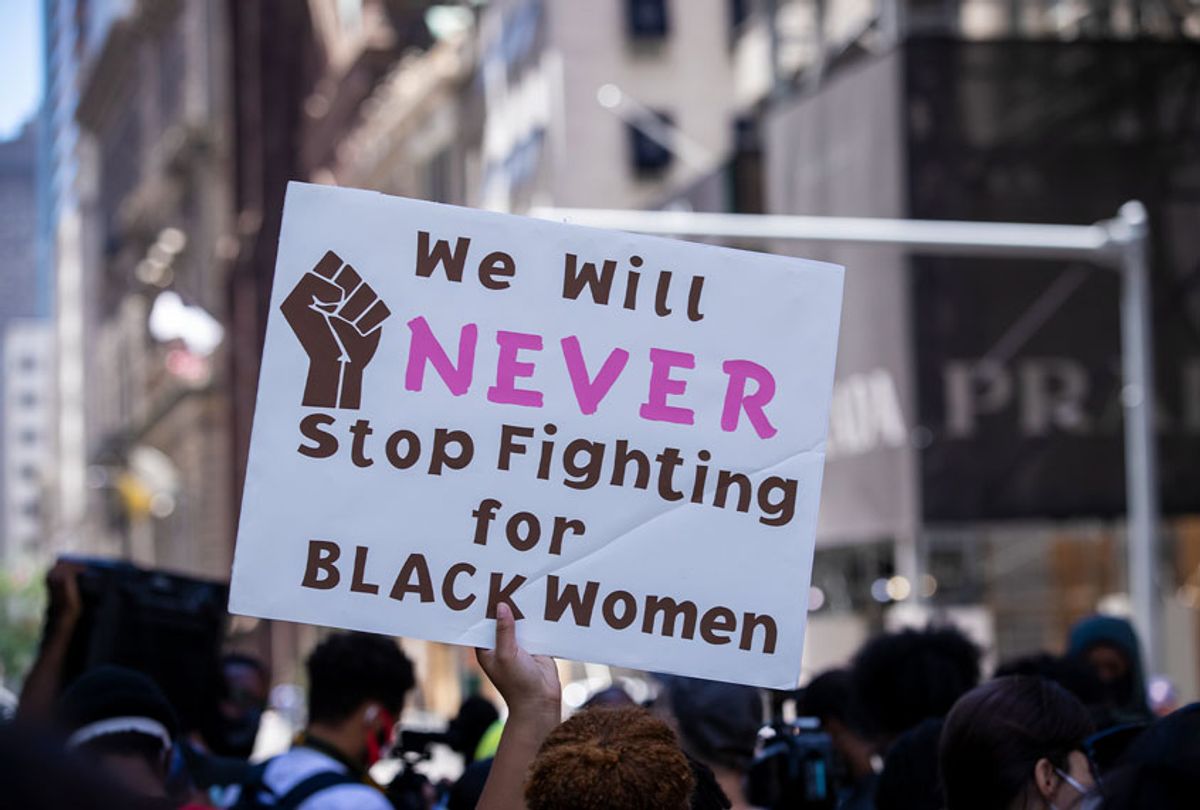 A protester holds up their homemade sign that says, "We Will NEVER Stop Fighting for BLACK Women" with a picture of the black power fist on the sign during a protest at Trump Tower. This was part of the Black Womxn's Empowerment March that started at Trump Tower and marched to Gracie Mansion. (Ira L. Black/Corbis via Getty Images)
--

In July, rapper Megan Thee Stallion was involved in a horrific incident in Los Angeles. She was shot in both feet. Police reports of what happened were unsurprisingly vague, not even confirming that she suffered gunshot wounds. In the wake of the shooting, she was dismissed and ignored, joked about and made into a meme on social media. In order to counteract rampant speculation and misinformation, she opened up about the incident on Instagram, claiming hip hop artist Tory Lanez was the shooter. She has even felt the need to share photos of her injuries to prove her story, something no one should have to do. No matter your feelings or opinions on Megan or her music, she is a victim of violence.

As if Megan hadn't been through enough, though, here comes Chrissy Teigen — a celebrity and a woman of color with a platform and a huge following on Twitter who decided to make a tasteless joke about her not long after news of the shooting broke: "I have a Megan Thee Stallion joke but it needs to be twerked on." Though Chrissy claims to have love for Megan, she chose to publicly joke about her during a sensitive time. Many people dismissed it as harmless, finding it hard to see Teigen's tweet as a big deal. These people have probably never been shot before. But when you are a Black woman, all aggressions are still aggressions. We are marginalized every day, in every way. And we feel hurt when we are thrown away, expected not to react or feel, not to be human in our response.

As a Black woman in America, I am disrespected far too often and disregarded every day — like we throw away trash, without any thought. I am the victim of aggressions big and small, professionally and personally. I experience micro-aggressions that turn to macro-aggressions and macro-aggressions that people dismiss as not that big of a deal. But they all feel awful to me, and they feel awful to all of us. Most times we're just trying to do our jobs, mind our damn business, take care of our own, and pretty much just live. But for Black women in America, our lives have never been fair or just.

And Black women — from Rihanna to Bernice King to the members of Black Twitter — were the first to come publicly to Megan's defense and support her while others made memes about her attack.

This is why the term "women of color" just doesn't do it for me. It isn't enough to describe the unique experiences of Black women. Our fights and struggles are not the same as other women. That term has also become a way for white people, and others who conform to white supremacy, to perform inclusivity by lumping us all together and checking the box on diversity. And as hard as this truth may be, it also enables other women from diverse communities and backgrounds to be with us only when it's convenient. When Black women are under attack or shouting for folks to recognize, respect and support us, "women of color" can marginalize us, too.

In Megan's instance, the term "woman of color" is not enough to cover the aggressions levied on Black women by other "women of color." But make no mistake. This is not just a Megan Thee Stallion problem. This happens to us as Black women all the time.

Language matters. The term "person of colour" goes all the way back to 1796 and was "originally used in reference to light-skinned people of mixed African and European heritage as distinct from fullblooded Africans." Black communities embraced the term "people of color" in the 1960s, and it was also a way to show solidarity with other nonwhite groups and demonstrate that white supremacy affects all of us. More recently, phrases "of color" are often used with the intent to be more inclusive. But are they always?

I have an acquaintance who identifies as Latina and is very quick to call me her sister when it comes to issues that affect "women of color," but when I am calling for justice intentionally and specifically for Black women, she is eerily silent until the next time there is a march and she wants to go take photos and put them on Instagram. In this instance, this acquaintance is no different than white women who choose to exploit us.

A few years back, I had a doctor who praised herself for knowing how to treat women of color (literally marketed herself as a specialist for women of color) but ignored me when I complained about having excruciating pain for multiple days on end. She then misdiagnosed me, and tried to write me a prescription for tons of medicine I didn't need. After seeking a second opinion, I discovered I have fibroids — a condition that disproportionately affects Black women. Needless to say, I have a wonderful Black woman doctor now and have never looked back.

In my professional life, we often talk about "students of color" and "people of color" as a means to be inclusive. But many times that is not enough. Black children — specifically Black girls — who are being wrongly targeted because of their hair, their appearance, their perceived loudness and their identities are being disciplined, arrested and suspended at much greater rates than their white peers. A judge literally refused to release a Black girl from a juvenile detention center in Michigan for not doing assignments online, an egregious act that demonstrates that American society doesn't see Black girls as girls but as criminals from a very early age. What's wrong with naming that?

Don't "all lives matter" me as a Black woman. I don't need temporary allyship or apologies. I need disruption right now.

As part of the national reckoning on racial justice (which I hope to be more than full of actors, but the promise of meaningful actions), it is also time for a revolution that truly centers Black women. It's time to normalize our lives, our experiences, our talents, our successes and our failures.

We cannot afford to wait for a tired-ass apology from America.

America has not and unfortunately will not take responsibility for tossing away Black women at every turn. The judge in Michigan who jailed a Black girl for not doing homework will not apologize for causing her trauma, even though she is free. It has been months and we are still shouting for justice for Breonna Taylor — and we have since learned that she was alive in the moments after her shooting and no one bothered to help her.

Every signal, image and experience is meant to teach us that we mean nothing, that our lives don't matter and that we should just accept our oppressed fate in this country.

But, if the late congressman John Lewis' life teaches us anything, it's to actively dismantle injustice by getting in the way.

That means that we've got to keep pushing and being who we are and showing the next generation that representation more than matters, it incrementally moves America's consciousness, whether folks like it or not. And if we're really moving the needle on justice, then we will get to a place where we will stop celebrating the firsts for Black women and normalize the many.

A movement that truly centers us is led by us and calls out those who marginalize us — even if it is hard, and even if it is directed at other women of color. We have to continue to demand that those who  "of color" us also start to protect us; support our leadership in politics, professionally and in personal spaces; and respect Black women as smart, incredible, unique, beautiful people with dignity. It also means that our fight for justice, though it includes Black men, is also not about their toxic masculinity.

And let's be real clear: Black women are always at the front of movements, not just moments. We vote in record numbers, showing up to save a country that does not save us. We were the backbone of the Civil Rights Movement, and we show up to your women's marches even when you exclude us. We build, we organize, we create, we lead, we protect, we push, we keep it all the way real, and we leave it all on the line, including risking our own lives to save others. But it's time that our hard work benefits us, too. We should be proud to be Black and not hide behind other women of color or white women's activism.

So, I hope that Megan gets true justice and that we believe Black women the first time. If she were white or another more socially-acceptable woman of color, people would be yelling from the rooftops about how unfair she has been treated and there would likely be no questions about her story. Imagine how the world flip out if someone shot Taylor Swift? The world would probably stop! But I won't waste my time waiting on that altered reality or performative apologies.

Instead, I'm getting in the way now. I'll probably offend and make people uncomfortable in my journey — and that's the whole point. As Auntie Maxine said, "I'm reclaiming my time." I'm making trouble for those who dismiss and "of color" us, and those who have the power to change it but choose to do nothing. Black women: This moment is ours, too. Let's not just stand up; we've got to stand in the way.