Polling place bottleneck delays could begin soon after they open

During the busiest periods, the process will slow due to COVID-19’s constraints 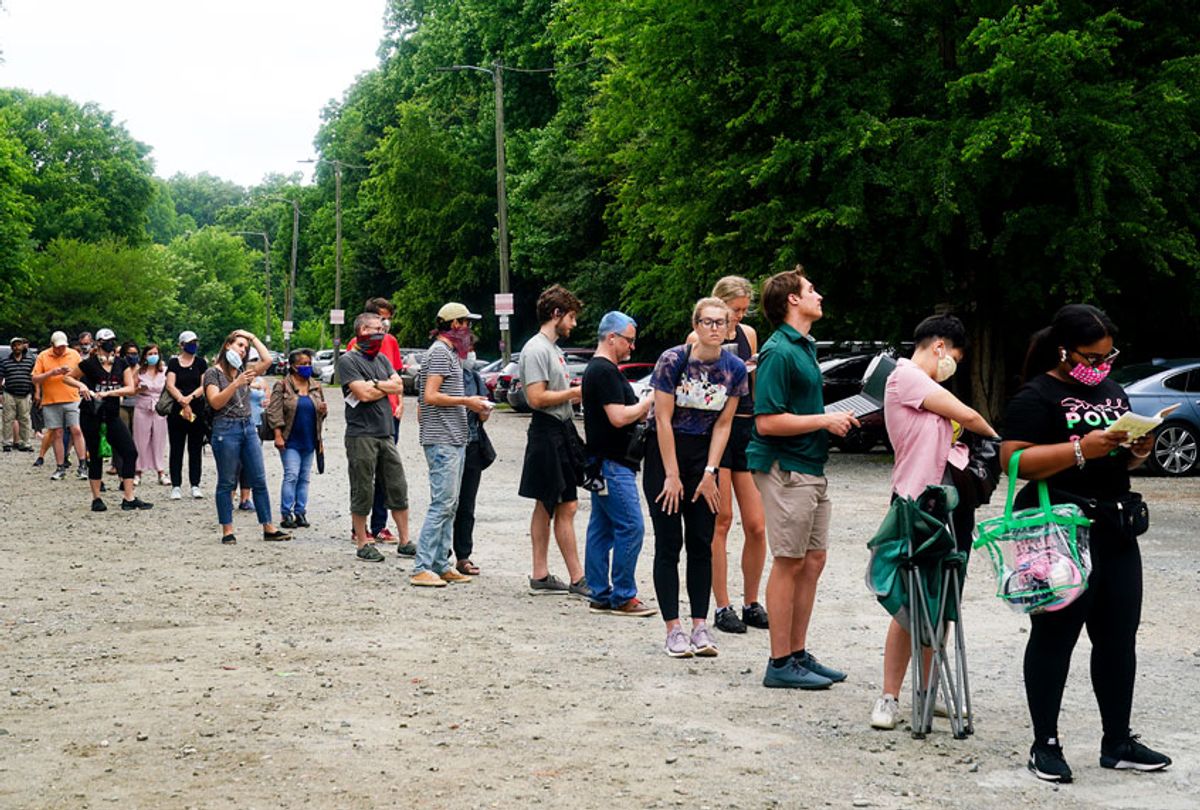 For the estimated 50 million Americans who will vote at a polling place this fall, delays and long lines will likely surface sooner than in past presidential elections—America's highest turnout elections—because of challenges due to COVID-19, according to election logistics experts.

"When do bottlenecks occur?" asked Charles Stewart III, the MIT director of the Caltech/MIT Voting Technology Project, after noting that 50 million voters would likely cast ballots at polling places this fall. "There comes a point, it's when you reach 80-to-90 percent of [what] the theoretical capacity is, that the lines just go through the roof."

Stewart was speaking at a Bipartisan Policy Center (BPC) briefing that sought to promote new planning tools that local election officials could still use to try to prevent bottlenecks this fall. While 80 million or more voters will likely cast mailed-out ballots, those voting in person will face COVID-related constraints that will slow down the process when it gets busy.

"Bottlenecks appear for a variety of reasons," Stewart said. "Sometimes they appear because you've had emergencies… There are three big parameters. How fast do people arrive? How long does it take to serve people? How many places can you serve them?"

The pandemic has forced election officials to rethink how they handle polling place voting. Many have had to find new locations that are large enough to accommodate social distancing concerns and require fewer poll workers. That constraint has meant closing many longtime neighborhood precincts and opening voting centers in public schools and libraries, said Michael Vu, the registrar of voters in San Diego County, California.

Even though three-quarters of the county's 1.8 million voters will vote with absentee ballots as they have in recent elections, Vu said that the pandemic forced his staff to consolidate its 1,600 neighborhood polling stations into 235 "super polls" and take other steps, such as doubling the drop-box locations for absentee ballots and having four consecutive days to vote in person that end on Election Day, November 3. These steps will be accompanied by "the most robust" public education campaign, he said. Still, Vu had worries.

"The biggest uncertainty is voters," he said. "How will voters behave on Election Day? Will they vote their mail ballot in the high numbers that we need them to, to really not spread the virus if they go to their respective [in-person polling] location?"

Gretchen Macht, a University of Rhode Island mechanical, industrial, and systems engineering assistant professor, recommended that election officials use familiar polling places that are spacious—like public school gyms—if they can. She showed new precinct layout software that officials could use to map how voting equipment could be set up to accommodate voter traffic.

Juan Gilbert, the University of Florida chair of the computer and information science and engineering department, described a free ticketing software system that he created that could be easily used by poll workers to expedite the check-in process.

The BPC's briefing was to alert election officials about new tools to configure polling places. That discussion revealed that the fall's in-person voting would have a range of new elements for voters, which usually slows down the process. The experts cited other factors that could prompt bottlenecks akin to rush-hour traffic jams that seem to appear out of nowhere.

"We have examples like this, a recent executive order of the governor of Maine restricting in-person polling places in that state to no more than 50 people at any one time," Stewart said. "We are going to have a substantial number of people voting in person. Those in-person voting places are going to be constrained. Officials managing polling places need a plan."

The experts urged election officials to get specific with estimating how fast voters would arrive and how long it would take for checking voters in, ballot-marking, and preparation of the voting station for the next voter. They recommended having real voters take part in mock exercises.

But what emerged beyond the planning and tools discussed was a big warning for this fall's in-person voters. They should expect delays, especially if they arrive during the highest-traffic periods, which tend to be before and after work.

The BPC briefing underscored that Michelle Obama was not exaggerating when she cautioned during the opening night of the 2020 Democratic National Convention that it may take longer to vote this fall, especially in person on Election Day—remarks that some officials said were a bit too dire. Obama also advised people to vote with an absentee ballot or to vote in person at an early voting site, thus making Election Day voting their last resort.

"We've got to vote early, in person if we can. We've got to request our mail-in ballots right now, tonight, and send them back immediately and follow up to make sure they're received," Obama said. "We have got to grab our comfortable shoes, put on our masks, pack a brown bag dinner and maybe breakfast too, because we've got to be willing to stand in line all night if we have to."