The most famous Bronze Age artifact may actually be from the Iron Age. Here's what that means 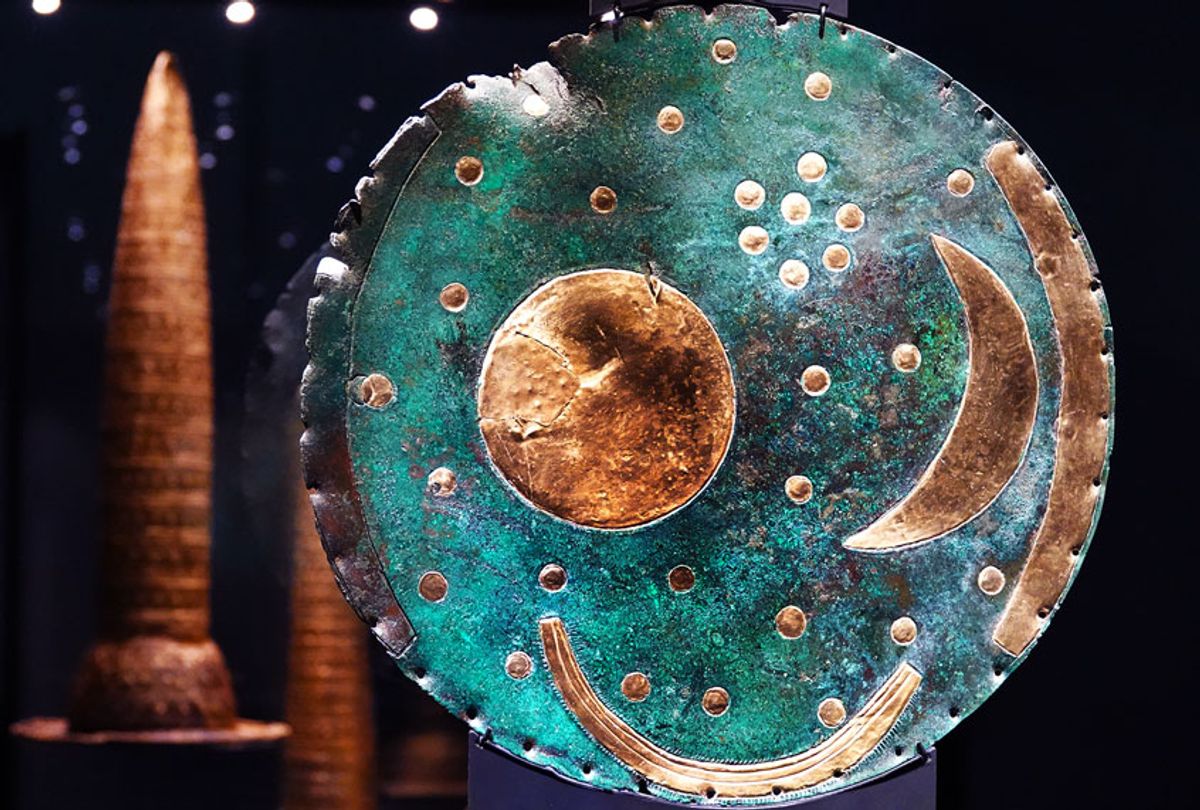 The mysterious Nebra sky disk, a famous bronze artifact that depicts the cosmos, may not be as old as scholars once thought — and, therefore, may not actually prove that human beings were well-informed about the universe during the Bronze Age, as previously believed. The age of the artifact, which has been considered one of the most important archaeological finds since its discovery in 1999, is called into question in a new academic paper that could rewrite what we know about prehistoric knowledge in the Bronze Age and Iron Age.

The paper, which was published in the German journal Archäologische Informationen, calls into question the veracity of the claims made by the disk's discoverers, which in turn revises the age of the disk. The disk is purported to have been discovered by two looters in 1999 in the German state of Saxony-Anhalt. Thus, the Nebra sky disk moved around the black market for several years before being seized by state police. After its recovery, the state launched an investigation to determine the disk's origin; at the time, it was believed that other Bronze Age artifacts, including swords, armor and axes, were found in the dig area as the Nebra sky disk.

Yet analysis of the metals used in these other artifacts suggests that their ore came from different deposits years apart, meaning that it is not clear that all of the objects supposedly found at the same site as the Nebra sky disk are from the same collection or period.

As for the disk itself, the authors — Rüdiger Krause, professor for prehistory and early European history at Goethe University Frankfurt, and Rupert Gebhard, director of the Munich Archäologischen Staatssammlung — believe that it was created during the Iron Age of the first millennium BCE, rather than during the Bronze Age around 1600 BCE as previously thought. There is ample evidence in the different ratios of metal isotopes, particularly lead, that points to that conclusion.

The Nebra sky disk is roughly one foot long in diameter and weighs just under five pounds. The disk has a blue-green patina and shows a gold-colored crescent moon, a number of stars and a large round object that could depict either the sun or a full moon. At some point after being originally created, two arcs constructed of gold from a different origin were added to the sides. It is believed these were intended to represent the angle between the solstices. A third gold arc was later added to the bottom.

There have long been doubts about the disk's historical significance, and even its authenticity, because of the way in which it came to the academic world's attention. As Krause and Gebhard explain, "the Nebra Sky Disk came into the hands of archaeologists only after a lapse of [about] four years after its discovery. The history of its discovery was reconstructed according to information supplied by the first buyer and the finders of the object as well as to observations of traces of damage on the disc."

The scholars also argue that "the site that was considered the discovery site until today and which was investigated in subsequent excavations is with high probability not the discovery site of the looters" and that "there is no convincing evidence that the Bronze Age swords, axes and bracelets form an ensemble of common origins."

Krause and Gebhard point to similarities between the depictions of celestial bodies on the disk and Celtic myths and beliefs as they existed in the first millennium BC, which was the Iron Age in Europe.

"The fact that motifs of the night with stars and the moon crescent are extremely frequent in the Late Iron Age seems particularly remarkable, and at the same time this is proven by historical sources as well," the authors write. "In essence they describe – in addition to the continuing sun symbolism – above all the symbols of the night, which played a special role in the ancestral history of the Celts and therefore are present in the Celtic lunisolar calendar, too."

If Krause and Gebhard are correct, this would mean that previous assumptions made as a result of the disk's earlier supposed age — particularly about human understanding of basic astronomy — will have to be rethought.