Lyft laid off contract janitors while spending $17.5 million on an astroturf ballot measure 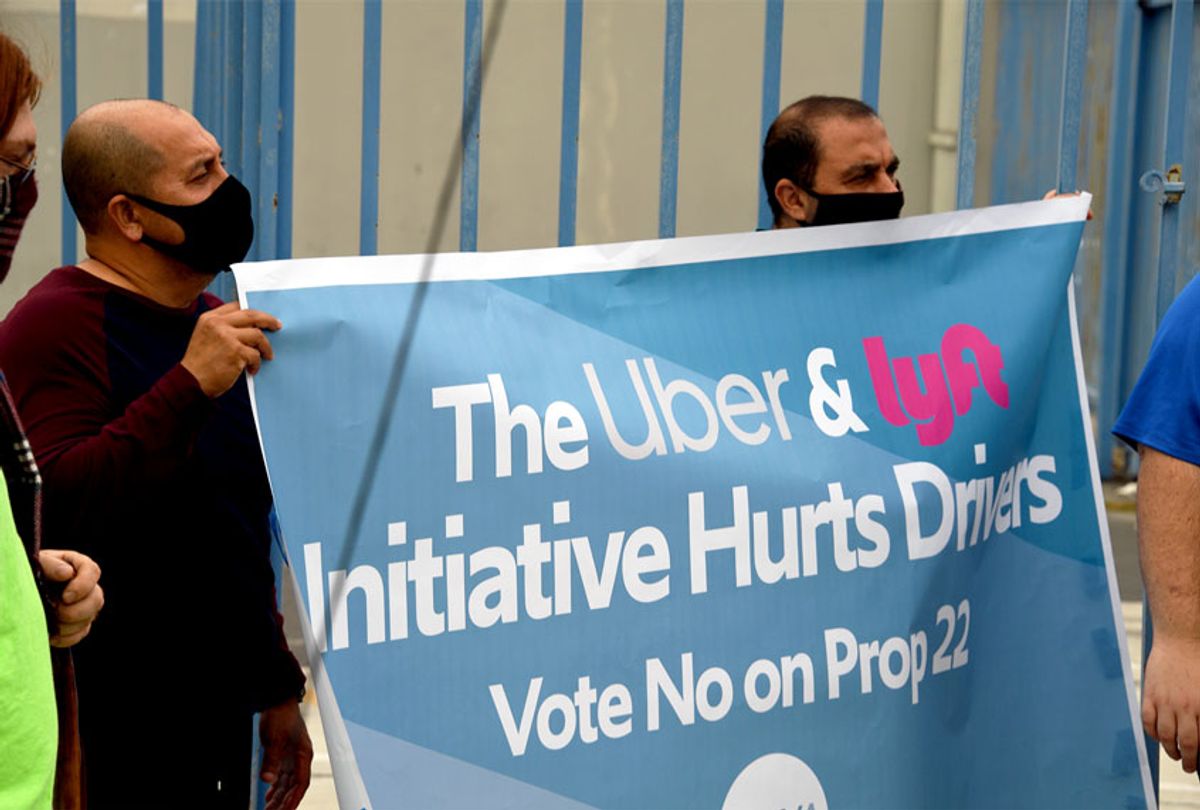 On Labor Day, a group of laid-off janitors who once maintained Lyft's San Francisco headquarters gathered outside the building to demand an expansion in unemployment benefits and more clarity around the status of their jobs since they were fired in June. At the end of the month, workers like Rezk Ghanim say they will no longer have unemployment benefits.

"It's really scary because we don't know if we're going to have a job or not, we don't know what the deal is," Ghanim told Salon in an interview. "I have one more month left on my unemployment benefits and what's gonna happen after that? People are worried, and people are scared."

Ghanim, who worked at Lyft via a subcontractor called Service by Medallion, first started working at the gig economy conglomerate in March 2019 as a main dishwasher. Then he got promoted to a nighttime foreman, which led to another promotion as morning foreman leading various custodial duties. Then in March, as the coronavirus began to spread around the Bay Area, Lyft sent its employees to work from home. However, service workers who kept the estimated 361,300 square feet-headquarters clean and maintained didn't have that luxury.

As reported by KQED, 63 janitors who worked for Service By Medallion were informed via text messages that they would only get two days of work per month in the coming months in April. By June, at least 90 workers received an official letter of termination, Ghanim told Salon.

"Lyft got paranoid.... they didn't want us to get sick or anybody to get sick, so they said we can't afford you to work, so just go home," Ghanim told Salon. "We asked our supervisors, 'What do we do next now that we're jobless?' They said all you can do is go to the EDD [Employment Development Department]."

Ghanim said it's been especially challenging in San Francisco, where he pays $1,700 for a one-bedroom apartment. Ghanim is receiving $450 a week on unemployment, which isn't enough to fully cover his rent. And jobs are hard to come by.

"Finding a job has been really difficult," he said. "I've been trying to find a CAD job, a construction job, a gas station job, any type of job, and like I said things are getting worse."

Lyft's Janitors are organized with the Service Employees International Union (SEIU) Local 87 chapter. Olga Miranda, who is the president of the union SEIU Local 87 in San Francisco, was especially outraged at Lyft's decision to terminate its janitorial services while spending millions on the Proposition 22 campaign in California — an astroturfed ballot proposition effort which, if successful, will allow Lyft to keep their drivers classified as independent contractors rather than full-time employees. So far, Lyft has contributed $17.5 million to the "Yes on 22" coalition, according to campaign filings.

Miranda alleged that after Lyft terminated its contract with Service by Medallion, it hired a non-union janitorial contractor. Salon is waiting for Lyft's to respond to a comment request regarding this change in custodial subcontractors.

"This is just to shed light on what Lyft is capable of doing in trying to lead how to weaken workers that are represented by a collective bargaining agreement," Miranda said.

The Local 87 chapter is part of the Justice for Janitors movement, which has been fighting for the rights of janitors for nearly 30 years. On Monday, janitors in San Francisco were joined by hotel workers, rideshare drivers, and other frontline and furloughed workers as part of a bigger protest against some of the city's biggest companies that have left their service workers behind during the pandemic.

"We're putting these billion-dollar corporations in our COVID-19 Hall of Shame, because Marriott, Lyft, and the SF Giants have put workers' lives at risk through unsafe working conditions and abandoned them while they struggle to survive," Rudy Gonzalez, Executive Director of the San Francisco Labor Council, said in a statement. "This year, we're going to reclaim Labor Day for working families as we fight back against San Francisco's worst corporate offenders."