Why west coast wildfires are turning the skies red

Photos of blood-red skies along the west coast have gone viral. We asked scientists what's happening 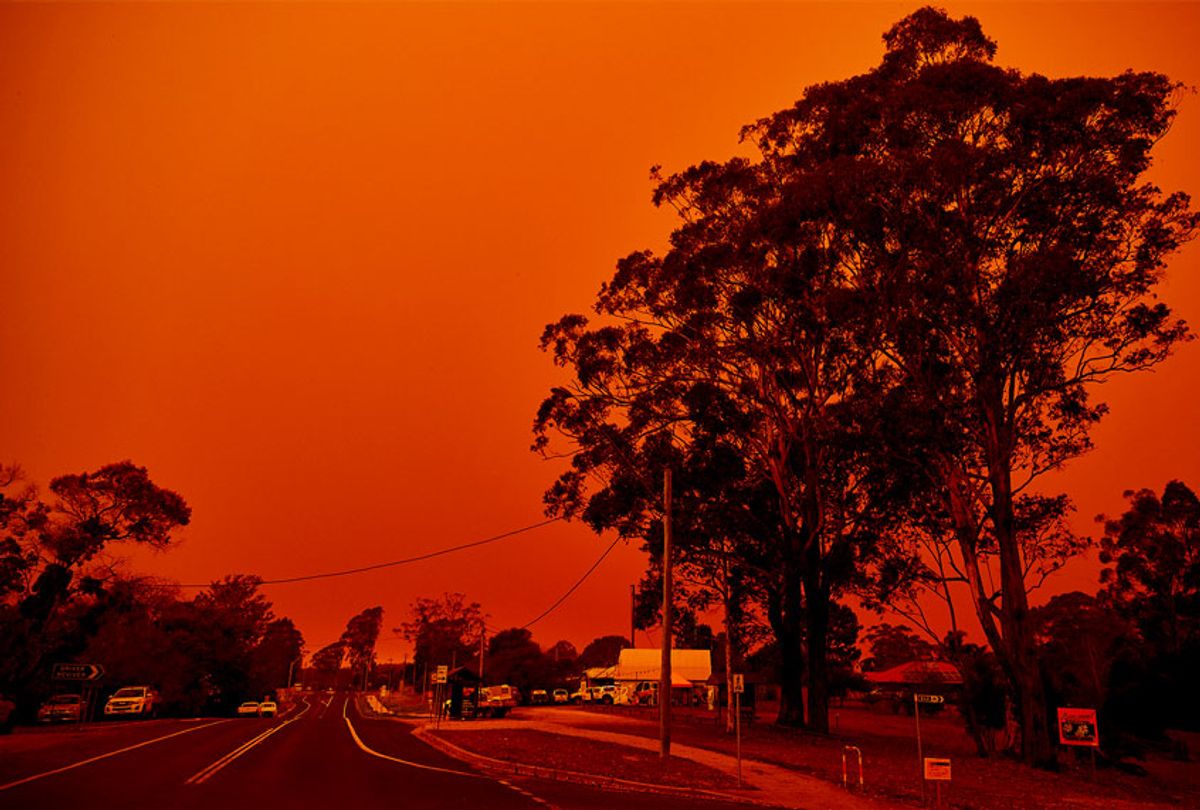 The sky turns red over the town on January 04, 2020 in Bodalla, Australia. A state of emergency has been declared across NSW with dangerous fire conditions forecast for Saturday, as more than 140 bushfires continue to burn. (Brett Hemmings/Getty Images)
--

OAKLAND, CALIF. — Residents in the San Francisco Bay Area woke up disoriented this morning; literally and metaphorically cloaked in a reddish haze. In some parts of the region, ash rained from the sky. The street lights stayed on past noon in some neighborhoods because it was so dark outside. Farmers reported that their chickens were confused if it was day or night.

The Bay Area has seen smoke waves before, but nothing as eerie and apocalyptic as today. After six months of a pandemic and weeks of record-breaking heat waves and wildfires, it's no surprise that Californians turned to dark humor to cope.

Some Twitter users posted dismal shots of the sepia sky with variations on this caption: "Greetings from hell."

Videos and photos from Oregon, where wildfires are raging, show similar hellscapes.

Those who live in wildfire-prone regions may be familiar with how smoke can blot out the sky, or tint sunlight slightly orange. But the severe blood-red skies are a new sight for many, and those around the country watching from afar may be taken aback at such an alien scene.

So, what exactly is going on? The answer lies in the physics of the atmosphere.

"The mysterious glowing red skies often accompany nearby wildfires, as small particulates from the burning affect the way that light travels through the atmosphere," Paul Ullrich, an associate professor of regional and global climate modeling at University of California-Davis, told Salon.

"Namely, when light passes near a gas molecule it tends to bounce in a random direction giving the whole sky an ambient glow," Ullrich said. "The shorter wavelength of blue light is preferentially scattered by the gases that make up the atmosphere; smoke particulates are much larger than the gas molecules that make up the air, and so interact differently with light."

Ullrich added: "They tend to absorb blue light and scatter red light, leading to the sky taking on a reddish glow when they're in the atmosphere."

Interestingly, the air quality in the Bay Area at the moment isn't as bad as it looks. In fact, the air quality index (AQI) has been at mostly moderate levels. However, the sky tells a different story, and the red sky phenomenon is strange enough that even the Bay Area's branch of the National Weather Service said that this goes "beyond the scope" of their models for predicting air quality or smoke haze movements.

So why is there a discrepancy between what's happening in the sky and on the surface?

"That is because high winds and turbulence are keeping the smoke high up in the atmosphere, above 2500 feet altitude," Ullrich said. "So while it can affect incoming light, there isn't as much smoke on the near surface."

Adele Igel, an assistant professor who teaches an atmospheric radiation class at the University of California-Davis, told Salon technically what the Bay Area is experiencing is a "kind of haze." Specifically, Igel says, the smoke is coming from California's wildfires as the smoke from the Oregon wildfires is blowing out toward the coast.

"Fire of course produces smoke but also a lot of heat," Igel told Salon. "The hot smoky air rises from the surface fairly easily; how high it goes depends on a lot of factors."

The smoke today seems to have been able to rise higher than on recent days. A pilot tweeted that flying out of San Francisco international airport today at 6,000-11,000 feet, there was "a very thick layer of ash."

"It was uncomfortable to breath [sic], like being very close to a fire," the pilot tweeted.

Igel says with as much smoke as there is in California, a red sky is normal. "Is so much smoke normal?" Igels said. "That's hard for me to say."

As far as how the sky might "clear up," Michael Mann, Distinguished Professor of Atmospheric Science at Pennsylvania State University told Salon via email that could happen a "couple different ways."

"Either the wind changes direction (a strong onshore wind would clear things out for San Francisco) or the fires inland that are creating the smoke subside," Mann said. Mann added that the photos he's seen of the Bay Area remind him of what he saw in Sydney, Australia, which was gripped by wildfires in December during the Australian summer.

Several California leaders have used the wildfires to draw the link to climate change. As Salon has previously reported, California's wildfires are becoming more extreme for a couple of different reasons; climate change is one.

"Climate change is making conditions hotter and drier in places like Australia and California,"  Mann said. "That creates the conditions for epic wildfires; our own research suggests an additional factor—climate change is making the jet stream both slower and waiver, so big high pressure systems (associated with hot, dry conditions) are more likely to stay parked over a particular region, like California, for an extended period of time."