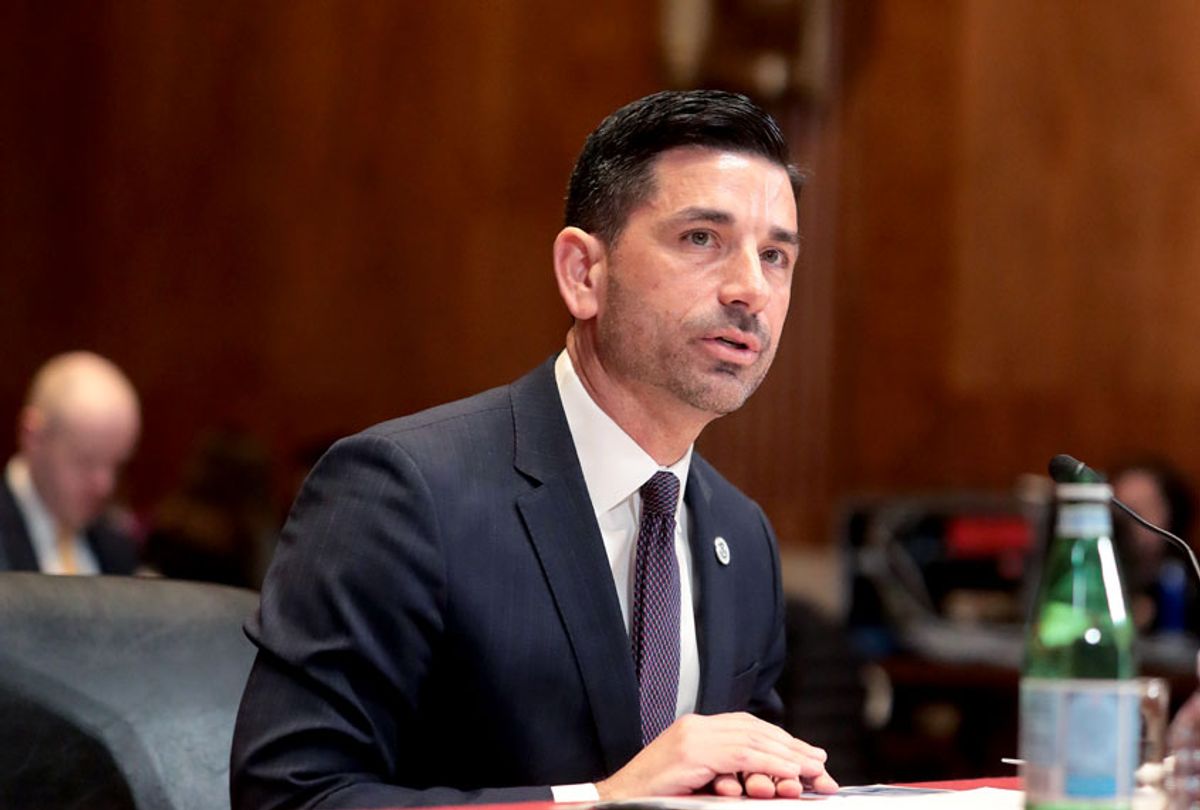 A new whistleblower complaint from U.S. Department of Homeland Security employee Brian Murphy released Wednesday provided a slew of provocative and disturbing allegations of criminal behavior and abuse of authority within the Trump administration.

The document was released by the House Intelligence Committee, and it actually summarizes numerous previous complaints that Murphy, the principal deputy under secretary for the department's Office of Intelligence and Analysis, has previously filed with the inspector general. The complaint alleged that he has since faced professional retaliation from his superiors because of his previous allegations, despite the fact that he is protected from such actions by federal law.

While the retaliation is condemnable on its own, most striking are the series of allegations the complaint described. It paints a picture of a department completely warped by the president's distorted priorities and determined to cater to his whims and prejudices, regardless of the facts — sometimes putting the country in danger.

On or about October 29, 2018, Mr. Glawe informed Mr. Murphy that instructions from Mr. Taylor and Ms. Marquadt had been issued for Mr. Murphy to ensure the intelligence assessments he produced for Secretary Nielsen's review supported the policy argument that large numbers of KSTs were entering the United States through the southwest border. Mr. Murphy declined to censor or manipulate the intelligence information, viewing it as an improper administration of an intelligence program, and stated to Mr. Glawe that doing what was being requested would constitute a felony.

2. The complaint makes a compelling case that former DHS Secretary Kirtjen Nielsen repeatedly and deliberately lied to Congress to exaggerate the threat at the border.

Murphy said that the secretary purposely tried to blur the distinction between "Known or Suspected Terrorists" (KSTs) and other categories of migrants, thereby misleadingly suggesting the border posed a greater threat of terrorism than it actually does. Even after he explained these distinctions to Nielsen, Murphy said, she consistently misled Congress about the matter:

Prior to Secretary Nielsen's testimony before the House Judiciary Committee on December 20, 2018, Mr. Murphy attended a preparation session that went over the information within the proposed testimony. During that session, Mr. Murphy sought to clarify for Secretary Nielsen the distinction between a KST and a Special Interest Alien ("SIA"). An SIA is a term of art created by U.S. Customs and Border Protection meant to describe a category of migrants who come from countries where there is a significant terrorism threat but regarding whom there is no individualized basis for suspecting the person is themselves a terrorist. An SIA does not constitute a KST.

Notwithstanding the clarification provided by Mr. Murphy, he has a good faith belief that the testimony Secretary Nielsen subsequently provided on December 20, 2018, regarding KSTs constituted a knowing and deliberate submission of false material information. This assessment formed the basis of the anonymous OIG complaint Mr. Murphy submitted on November 2, 2018. On January 9, 2019, without consulting with Messrs. Glawe or Murphy, DHS issued a document – apparently crafted by Messrs. Wolf and Taylor, and Ms. Marquadt – entitled "Myth/Fact: Known and Suspected Terrorists/Special Interest Aliens". The document contained erroneous information regarding the number of KSTs and SIAs encountered along the southwest border.

On March 5, 2019, Mr. Murphy participated in another preparation session with Secretary Nielsen, this time in advance of her testimony before the House Committee on Homeland Security. Messrs. Wolf and Taylor were also present. During the session, Mr. Murphy provided Secretary Nielsen with documentation reflecting that the number of documented KSTs crossing the southwest border only consisted of no more than three individuals, not 3,755 individuals as she had previously attested to in her testimony on December 20, 2018. 3 Mr. Wolf and Mr. Taylor responded by saying Secretary Nielsen should claim the details were classified, state any KST crossing was one too many and deflect away from addressing the significant discrepancy in the data. Mr. Murphy advised Secretary Nielsen that he did not believe that was appropriate, and noted that the few "known" KSTs who were apprehended were derivative contacts, in so much as they merely had a name or phone number of a person who was known to be in contact with a terrorist. At that point, Mr. Murphy was removed from the meeting by Mr. Wolf. He then informed Messrs. Glawe and Hanna what transpired that evening.

It is Mr. Murphy's good faith belief that the testimony Secretary Nielsen delivered on March 6, 2019, regarding KSTs again constituted a knowing and deliberate submission of false material information. Mr. Murphy outlined that assessment in his anonymous May 13, 2019, OIG complaint.

3. Acting Deputy Secretary of Homeland Security Ken Cuccinelli illegally tried to distort intelligence reports he viewed as too favorable to asylum seekers, claiming they were concocted by the "Deep State," the complaint said.

After the meeting, Mr. Murphy informed Mr. Glawe that Mr. Cuccinelli's instructions were illegal, as well as constituted an abuse of authority and improper administration of an intelligence program.

4. Under Secretary David Glawe was reportedly almost fired by Trump after he testified about the threat posed by Russian election interference.

5. Acting DHS Secretary Chad Wolf told Murphy to stop reporting on Russian interference and to focus on China and Iran, which Murphy believed "would put the country in substantial and specific danger," the complaint said.

In mid-May 2020, Mr. Wolf instructed Mr. Murphy to cease providing intelligence assessments on the threat of Russian interference in the United States, and instead start reporting on interference activities by China and Iran. Mr. Wolf stated that these instructions specifically originated from White House National Security Advisor Robert O'Brien. Mr. Murphy informed Mr. Wolf he would not comply with these instructions, as doing so would put the country in substantial and specific danger.

6. Officials were concerned that discussing the threats posed by white supremacists and Russian intelligence operations would reflect badly on Trump, and they preferred that Murphy's team work on "violent 'left-wing' groups" like "antifa."

These changes would clearly better match Trump's preferred rhetoric, though not reality.

In March 2020, Mr. Murphy's team at DHS I&A completed a Homeland [Threat] Assessment ("HTA"). Completion of the HTA was a requirement set forth by Acting Secretary Kevin McCleenan prior to his departure from DHS. Mr. Murphy was intimately involved in the editing and crafting of the HTA. Following its completion, the HTA was distributed by Mr. Glawe to Messrs. Wolf, Cuccinelli, and Gountanis. Shortly after the distribution, Mr. Glawe was informed that further distribution of the HTA was prohibited due to concerns raised by Messrs. Wolf and Cuccinelli regarding how the HTA would reflect upon President Trump. Two sections were specifically labeled as concerns: White Supremacy and Russian influence in the United States. Mr. Murphy stated to Mr. Glawe that this constituted an abuse of authority by Messrs. Wolf and Cuccinelli, and Mr. Glawe concurred with that assessment.

In May 2020, Mr. Glawe retired, and Mr. Murphy assumed the role of Acting Under Secretary. In May 2020 and June 2020, Mr. Murphy had several meetings with Mr. Cuccinelli regarding the status of the HTA. Mr. Cuccinelli stated that Mr. Murphy needed to specifically modify the section on White Supremacy in a manner that made the threat appear less severe, as well as include information on the prominence of violent "left-wing" groups. Mr. Murphy declined to make the requested modifications, and informed Mr. Cuccinelli that it would constitute censorship of analysis and the improper administration of an intelligence program.

During multiple meetings between the end of May 2020 and July 31, 2020, Mr. Murphy made protected disclosures to Messrs. Wolf and Cuccinelli regarding abuse of authority and improper administration of an intelligence program with respect to intelligence information on ANTIFA and "anarchist" groups operating throughout the United States. On each occasion, Mr. Murphy was instructed by Mr. Wolf and/or Mr. Cuccinelli to modify intelligence assessments to ensure they matched up with the public comments by President Trump on the subject of ANTIFA and "anarchist" groups. Mr. Murphy declined to modify any of the intelligence assessments based upon political rhetoric, and advised both officials he would only report accurate intelligence information as collected by DHS I&A.

Much of what is concerning about the complaint is what it doesn't mention. At several points, the complaint makes clear it can't repeat the substance of allegations regarding DHS officials because the material involved is classified. This is particularly concerning because other parts of the complaint indicate that officials abused the classification system to cover up embarrassing or inconvenient facts.

Additional point: One interesting point to note is that Murphy tried to push back on some reporting that was critical of DHS because it supposedly implied falsely that DHS was collecting intelligence information on journalists and reporters.

Murphy claims this didn't happen. Putting aside the particulars, this detail in the report may be seen as bolstering Murphy's credibility. Defenders of the administration will likely argue he's a disgruntled employee trying to hurt Trump and DHS,  but it's notable that he seems to be willing to defend the department when he thinks the facts have been unfairly reported. This suggests Murphy is someone who cares about getting to the truth, rather someone who is trying to hurt the president and the administration no matter the cost:

To be unequivocally clear, the press reporting was significantly flawed and, in many instances, contained completely erroneous assertions. For example, DHS I&A never knowingly or deliberately collected information on journalists, at least as far as Mr. Murphy is aware or ever authorized. There were, to be sure, efforts to track publicly available media reporting that included information that had been leaked from the U.S. Government, including publicly-accessible posts by journalists on social media, but DHS I&A did not seek authorization to and was not engaging in surveillance of journalists' private data.