Diana Rigg, star of "The Avengers" and "Game of Thrones," dies at 82 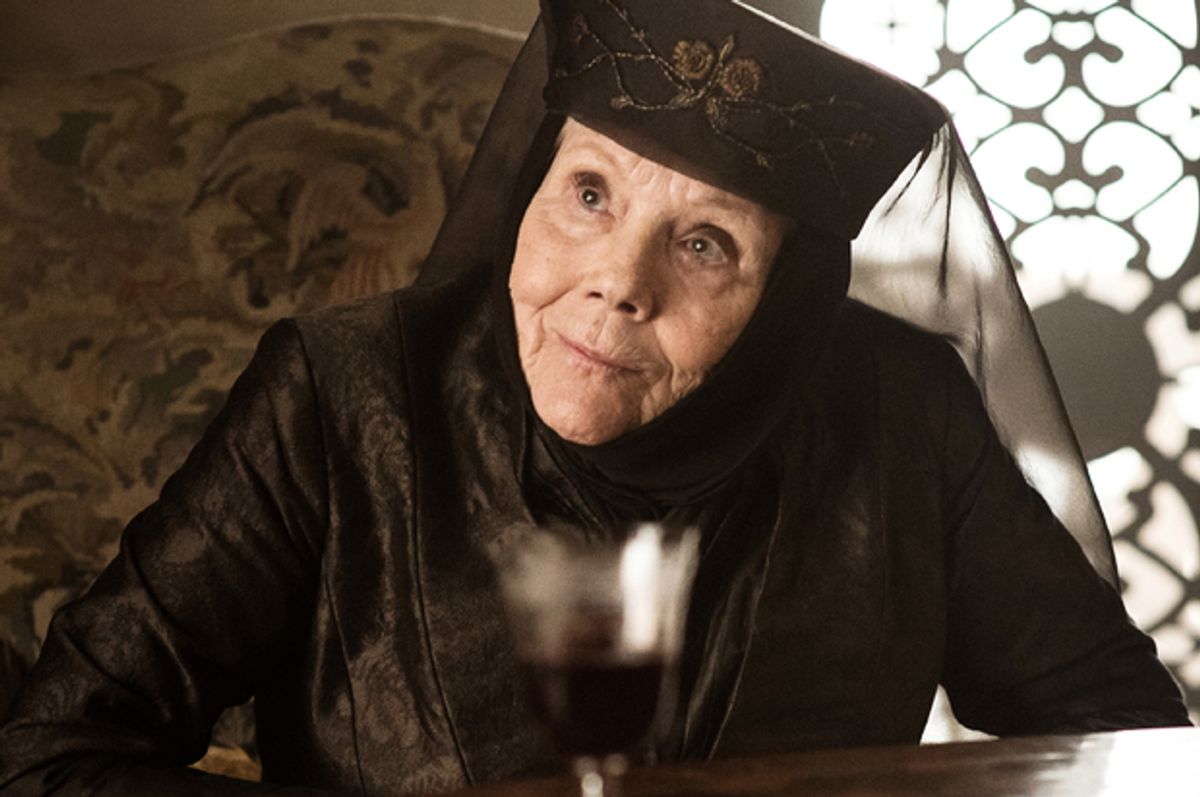 Diana Rigg, the Tony and Emmy winner who splashed into the world of television with her commanding turn as intelligence agent Emma Peel on "The Avengers" in the 1960s and played Lady Olenna Tyrell on "Game of Thrones" decades later, died Thursday at her home in England. She was 82.

Rigg was a venerable figure in Britain's entertainment industry who worked incessantly on stage, TV and film. She famously thumbed her nose at convention in her private life and in later years seemed to enjoy her status as a grande dame.

"She was a beautiful kind and generous human being that enhanced the lives of all that knew her as well as a great actress. She leaves a great void in my heart," said Lionel Larner, Rigg's longtime friend and talent agent.

Having a key role in the biggest TV series of the past decade was a fitting career capper for Rigg. On HBO's "Game of Thrones," Rigg recurred as Olenna Tyrell, also known as the Queen of Thorns, beginning with the third season in 2013. She was Emmy nominated for guest actress in a drama for her work on the show in 2013, 2014 and 2015.

Rigg also made a number of notable appearances on the big screen. She played a significant role in the history of the James Bond film franchise by portraying, with great élan, Tracy Di Vicenzo, the woman whom Bond, played by George Lazenby, marries with great joy in 1969's "On Her Majesty's Secret Service," only to see her murdered by the minions of arch villain Ernst Stavro Blofeld.

On ITV's "The Avengers," the British espionage series that blended sci-fi, fantasy and surreal elements with caper stories and offbeat humor, Rigg's intelligent, witty and catsuit-wearing Mrs. Peel was by far the most memorable. In the TV show — which starred Patrick Macnee from 1961-1969 as bowler hat-bedecked John Steed — the actress appeared in 51 episodes of the series from 1965-68, and was twice Emmy nominated for her work, in 1967 and 1968. In 2000, she shared a special BAFTA Award with Honor Blackman, Joanna Lumley and Linda Thorson, who had all appeared opposite Macnee's Steed in "The Avengers." A feature adaptation of the series, starring Ralph Fiennes as Steed and Uma Thurman as Mrs. Peel, was released in 1998. Macnee died in June 2015.

In between, she won an Emmy for playing Mrs. Danvers in a TV adaptation of "Rebecca" in 1997. She also received an Emmy nomination in 1975 for lead actress in a special program for "In This House of Brede," in which she played a London businesswoman who opts to become a nun, and in 2002 for supporting actress in a miniseries or movie for "Victoria & Albert."

Enid Diana Elizabeth Rigg was born in Doncaster, Yorkshire, England; she spent her early childhood in India. She did her training as an actress at the Royal Academy of Dramatic Art from 1955-57, and made her professional stage debut in Brecht's "The Caucasian Chalk Circle" in 1957.

Rigg was a member of the Royal Shakespeare Company from 1959-64, touring Europe and the U.S. as Cordelia in a RSC production of "King Lear" (she revisited the play in 1983, when she was Regan to Laurence Olivier's Lear); she was also Viola in a 1966 RSC staging of "Twelfth Night."

Rigg appeared on Broadway three times, starring in "Abelard and Heloise" in 1971 (her nude scene in the play and critic John Simon's tart assessment of her body generated publicity); a revival of Moliere's "The Misanthrope" in 1975; and a staging of "Medea" in 1994 — drawing a Tony nomination each time for best actress in a play and winning for "Medea."

Reviewing "Medea," the New York Times said, "Unlike Zoe Caldwell, who emphasized the sexuality of the character (and won a Tony Award in 1982 for her efforts), Ms. Rigg sees Medea as a woman of restless intellect. An orgiastic fervor informed Ms. Caldwell's performance; she had a savage growl in her voice. A passionate sense of injustice propels Ms. Rigg, whose voice never entirely loses its intrinsic musicality."

The actress also starred with George C. Scott in the Arthur Hiller-directed, Paddy Chayefsky-penned satire "The Hospital" (1971); the classic Vincent Price horror film "Theatre of Blood" (1973); the 1982 Agatha Christie adaptation "Evil Under the Sun," in which she played the despised and thus dispatched Arlena Marshall; and most recently 2006's "The Painted Veil," in which she played the Mother Superior.

She starred as Clytemnestra in a BBC miniseries adaptation of Sophocles' "Oresteia" in 1979, and she starred in an adaptation of "Hedda Gabler" for English television in 1981. The following year she starred in a Hallmark Hall of Fame remake of "Witness for the Prosecution," in which she took the part played by Marlene Dietrich in the 1957 Billy Wilder film (others in the cast included Ralph Richardson and Deborah Kerr).

The actress starred with David MacCallum in the excellent 1989 BBC/PBS miniseries "Mother Love"; starred with Angela Lansbury in the 1992 CBS telepic "Mrs. 'Arris Goes to Paris"; co-starred in the excellent "The Fortunes and Misfortunes of Moll Flanders," starring Alex Kingston; and starred in the BBC/PBS series "The Mrs Bradley Mysteries"  in 1998.

Though she had considerable stage experience, Rigg had few TV credits when she was cast in her career-making role in "The Avengers" in 1965.

The actress was a member of the National Theatre Company at the Old Vic from 1972-75, essaying Lady Macbeth in 1972. She was Eliza Doolittle in a 1974 revival of Shaw's "Pygmalion." Rigg played leading roles in premiere stagings of two Tom Stoppard plays, "Jumpers" in 1972 and "Night and Day" in 1978. In 1982 she toured in the U.S. in the musical "Colette," based on the life of the French writer and co-created by Tom Jones, but a planned Broadway staging did not materialize. In 1987 she had a leading role in a West End production of Sondheim's "Follies."

During the 1990s she turned in impressive stage work in Brecht's "Mother Courage," Albee's "Who's Afraid of Virginia Woolf" and Racine's "Phedre" and "Britannicus."

More recently she starred in Tennessee Williams' "Suddenly, Last Summer," the stage adaptation of Almodovar's "All About My Mother," Chekhov's "The Cherry Orchard," and a revival of Noel Coward's "Hay Fever." In 2011 she returned to "Pygmalion," this time in the role of Mrs. Higgins.

During the 1960s Rigg lived for eight years with actor-director Philip Saville, who was both older and otherwise married; she caused some scandal in the British tabloids when she proclaimed no interest in marrying Saville, saying she had no desire "to be respectable."

She was married to theatrical producer Archibald Stirling from 1982 until their divorce in 1990; they broke up when Stirling had an affair with actress Joely Richardson.

Rigg is survived by a daughter she had with Stirling, actress Rachael Stirling.