A furry pack brought disgraced former sheriff Joe Arpaio into their "furmeet" for the low price $30.99 on Cameo 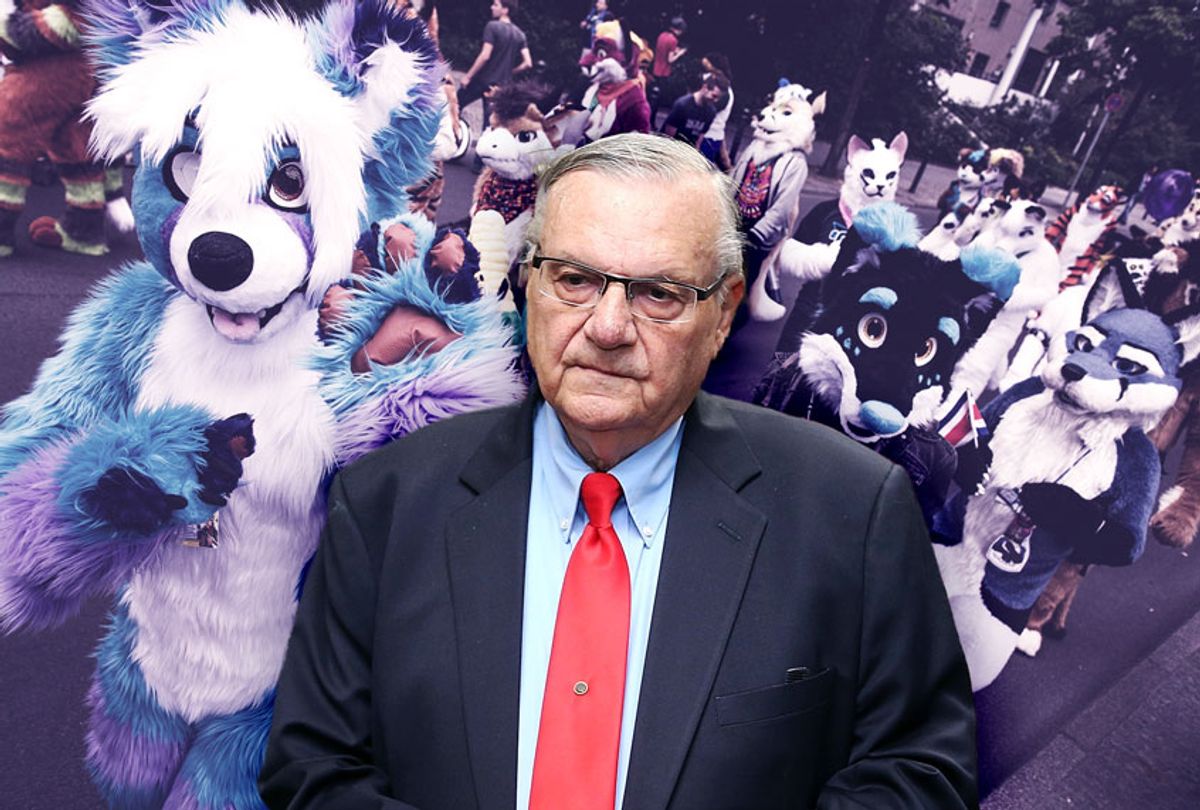 Former Maricopa County Sheriff Joe Arpaio | Participants, or furries, as they prefer to be called, attend a march on the second day of the 2016 Eurofurence furries gathering on August 18, 2016 in Berlin, Germany (Photo illustration by Salon/Getty Images)
--

Former Sheriff Joe Arpaio is doing what he can to help President Donald Trump win his state in November, but he took some time out of that to welcome the furry convention to Arizona, said the Arizona Republic.

In a video announcement posted Wednesday, Arpaio sent his well-wishes.

"Hey, good luck organizing the Arizona Furry convention," Arpaio said in the video. He mispronounces it "fury," however, indicating he didn't know what a "furry" was.

It's "for animal lovers," he said as an explanation.

"I've always loved animals, fought those that abused animals and will continue to do so," he went on. "In any event, have a great convention."

Furries aren't just animal lovers, they dress up as animals as part of a friendly and playful fetish.

"As far as what animal I would like to be, I'm kind of partial to dogs," he said. "But I love all animals. Thanks."

It all came to be because Arpaio joined Cameo, a service where people can pay public figures to send custom video messages for money. While most use the service to create a birthday message for their loved ones, or a special note for a club or cause, the furry pack brought Arpaio into their "furmeet" for the low price $30.99.

According to the report, it was clear the nearly 90-year-old Arpaio didn't know what furries were, and it was only after the fact that he learned of the "pawsome" fetish.

Later, Arpaio was contacted by the press about the video where he explained he gets requests for videos all the time. He could charge as much as $1,000 he said, but he decided not to so that his fans could have more access to him.

He said that he agreed to the video because he loves animals. He didn't research what a furry was, he confessed.

The report said that he asked for more information about furry culture to learn what he'd just done, but he brushed off any comments about him developing his own species or fursona.

"I have to do something to take up my time," said Arpaio, who was voted out of office in 2016 and lost in the GOP primary to win his job back. "(Cameo) is a good way to get to the people and answer their questions. I've got a lot of followers all around the nation."