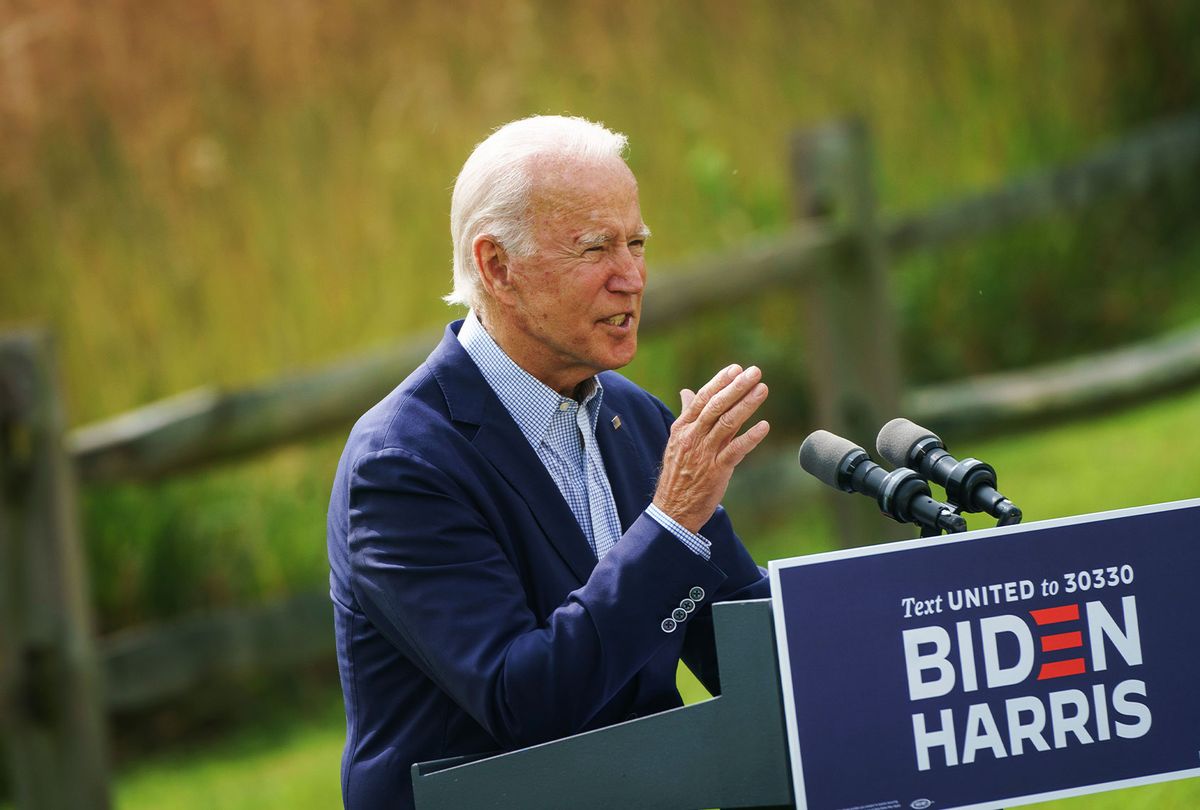 Democratic presidential nominee Joe Biden speaks about climate change and the wildfires on the West Coast at the Delaware Museum of Natural History on September 14, 2020 in Wilmington, Delaware. Biden has scheduled campaign stops in Florida, Pennsylvania and Minnesota later this week. (Drew Angerer/Getty Images)
--

A campaign advisory firm that was hired to help elect Democratic presidential candidate Joe Biden was targeted by suspected Russian state-backed hackers, according to a recent report.

Microsoft Corp. recently alerted the Washington-based firm SKDKnickerbocker that its staff had been targeted by individuals believed to have been affiliated with Russian hacking networks, according to Reuters. A person familiar with the hacking attempts told the wire agency that "they are well-defended, so there has been no breach." Microsoft also warned that both the Democratic and Republican presidential campaigns are being targeted by hackers backed by China, Iran and Russia.

SKDKnickerbocker is a prominent Washington campaign firm whose partner, Anita Dunn, is a senior strategist for Biden's campaign. It is responsible for efforts like "Vote Safe California," a $35 million campaign to increase voter turnout in the upcoming presidential election.

A spokesman for the Kremlin, Dmitry Peskov, dismissed the accusations as "nonsense."

"Over the past number of years, there's been significant evidence documented in the Senate Intelligence Committee's bipartisan report and numerous other places, including the 17 intelligence agencies, that Russia infiltrated our elections in the 2016 race and was continuing to do that throughout not only the 2018 elections, but also into the 2020 election," Aaron Scherb, the director of legislative affairs at the government watchdog group Common Cause, told Salon. "And so it's no surprise at all that this new evidence was revealed recently about their involvement in trying to hack the Biden campaign."

There is evidence that Russian state-sponsored hackers previously infiltrated prominent Democratic Party officials' emails amid the 2016 election. While a special counsel report did not charge President Trump himself with actively colluding with the Russian government, the investigation became politicized as a "witch hunt" by Republican Party officials and by the president himself.

Lindsay Gorman, a fellow at the German Marshall Fund's Alliance for Securing Democracy, feared that this hacking attempt would become similarly politicized. "Politicization in this arena directly undermines our democracy," Gorman told Salon.

"Given the tactics we saw in 2016, it should come as no surprise that Russia would be interested in targeting a firm tied to a political campaign," Gorman added. "It's important to note though that for the foreign actors we worry about in the context of cyber-espionage and organizations relevant to US policymaking, a range of motives may be at play.... For example, we don't know yet whether these cyber attempts on campaign-related infrastructure are part of a larger election interference plot or simply a means to gather intelligence on prospective future US policy should a particular candidate be elected in November."

While Russia's attempts to meddle in US elections in the past four years have caused widespread political outrage and led to investigations such as Robert Mueller's special counsel investigation, the United States also has a long history of meddling in other countries' elections. There were 62 occasions between 1946 and 1989, the height of the Cold War, when America intervened through direct or covert methods (or both) in other countries' elections. In 1948, for instance, America's foreign policy apparatus intervened in Italy's parliamentary elections to help Rome's pro-Western government defeat the Popular Front, a leftist alliance of parties. American intelligence officials have freely admitted to influencing or even controlling media outlets, funding candidates and engaging in other electioneering activity in order to thwart politicians who were perceived as pro-Communist or simply not as friendly to perceived American interests.

"If you ask an intelligence officer, did the Russians break the rules [in 2016] or do something bizarre, the answer is no, not at all," Steven L. Hall, a retired CIA intelligence operative, previously told the New York Times in a 2018 interview. Hall said that he "hope[d]" that the United States would "keep doing it," by which he meant carry out out "election influence operations."