As the West goes up in flames, Trump couldn’t care less 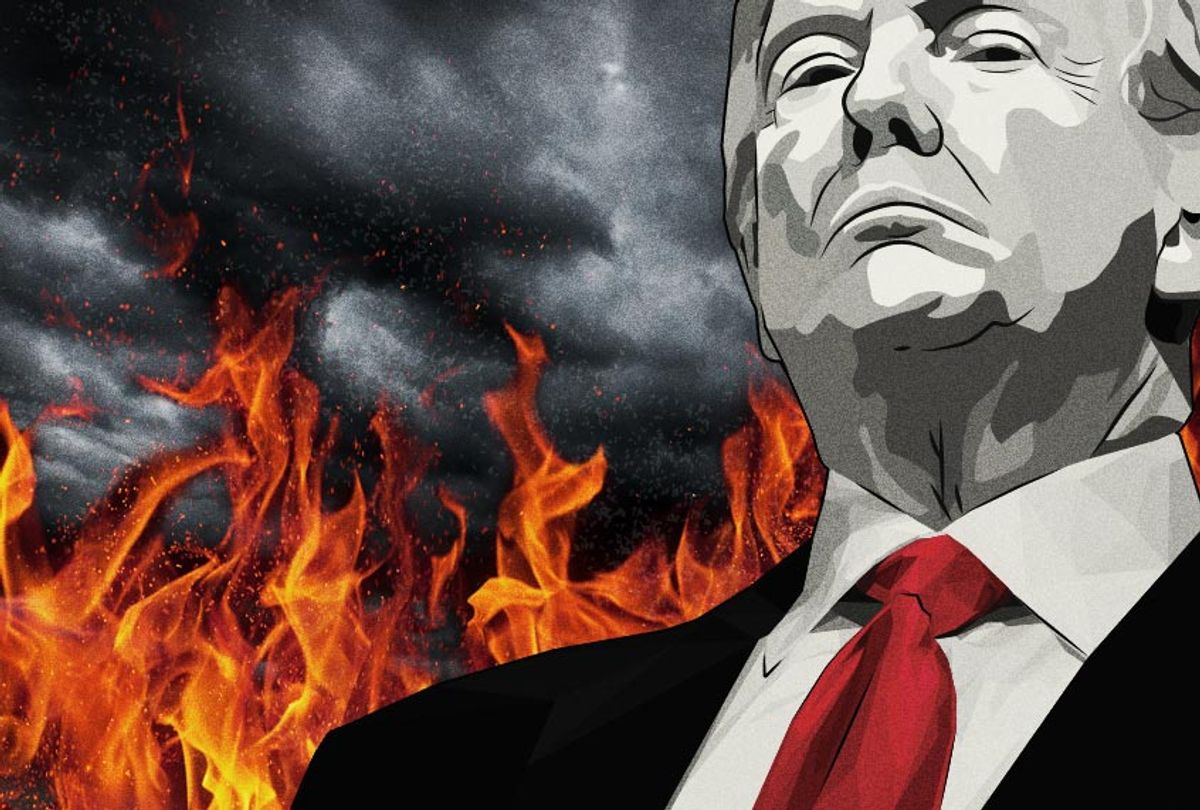 The air outside my window is yellow today. It was orange yesterday. The Air Quality Index is over 200. The Environmental Protection Agency defines this as a "health alert" in which "everyone may experience more serious health effects if they are exposed for 24 hours." Unfortunately, the index has been over 200 for several days.

The West is burning. Wildfires in California, Oregon and Washington are incinerating homes, killing scores of people, sickening many others, causing hundreds of thousands to evacuate, burning entire towns to the ground, consuming millions of acres, and blanketing the western third of the United States with thick, acrid and dangerous smoke.

Yet the president has said and done almost nothing. He's in California today for a quick photo-op, and then high-tails back to Washington (or is it Mar-a-Lago?) as fast as he can.

A month ago, Trump wanted to protect lives in Oregon and California from "rioters and looters." He sent federal forces into the streets of Portland and threatened to send them to Oakland and Los Angeles.

Today, Portland is in danger of being burned and Oakland and Los Angeles are under health alerts.

Trump couldn't care less. These states voted against him in 2016 and he still bears a grudge.

He came close to rejecting California's request for emergency funding.

"He told us to stop giving money to people whose houses had burned down because he was so rageful that people in the state of California didn't support him," said former Department of Homeland Security chief of staff Miles Taylor.

Another explanation for Trump's indifference is that the wildfires are tied to human-caused climate change, which Trump has done everything humanly possible to worsen.

Extreme weather disasters are rampaging across America. Last Wednesday, the National Oceanographic and Atmospheric Administration released its latest State of the Climate report, finding that just in August the US was hit by four billion-dollar calamities. In addition to wildfires, there were two enormous hurricanes and an extraordinary Midwest derecho.

These are inconvenient facts for a president who has spent much of his presidency dismantling every major climate and environmental policy he can lay his hands on.

Starting with his unilateral decision to pull out of the Paris climate agreement, Trump has been the most anti-environmental president in history.

He has called climate change a "hoax". He has claimed, with no evidence, that windmills cause cancer. He has weakened Obama-era limits on planet-warming carbon dioxide from power plants and from cars and trucks. He has rolled back rules governing clean air, water and toxic chemicals. He has opened more public land to oil and gas drilling.

He has targeted California in particular, revoking the state's authority to set tougher car emission standards than those required by the federal government.

In all, the Trump administration has reversed, repealed, or otherwise rolled back nearly 70 environmental rules and regulations. More than 30 rollbacks are still in progress.

Now, seven weeks before election day, with much of the nation either aflame or suffering other consequences of climate change, Trump unabashedly defends his record and attacks Joe Biden.

"The core of [Biden's] economic agenda is a hard-left crusade against American energy," Trump harrumphed in a Rose Garden speech last month.

Not quite. While Biden has made tackling climate change a centerpiece of his campaign, proposing to invest $2 trillion in a massive green jobs program to build renewable energy infrastructure, his ideas are not exactly radical. The money would be used for improving energy efficiency, constructing 500,000 electric vehicle charging stations, and increasing renewable energy from wind, solar and other technologies.

Biden wants to end the use of fossil fuels to generate electricity by 2035, and to bring America to net zero emissions of greenhouse gases by no later than 2050. His goals may be too modest. If what is now occurring in the west is any indication, 2050 will be too late.

Nonetheless, Americans have a clear choice. In a few weeks, when they decide whether Trump deserves another four years, climate change will be on the ballot.

The choice shouldn't be hard to make. Like the coronavirus, the dire consequences of climate change — coupled with Trump's utter malfeasance — offer unambiguous proof that he couldn't care less about the public good.