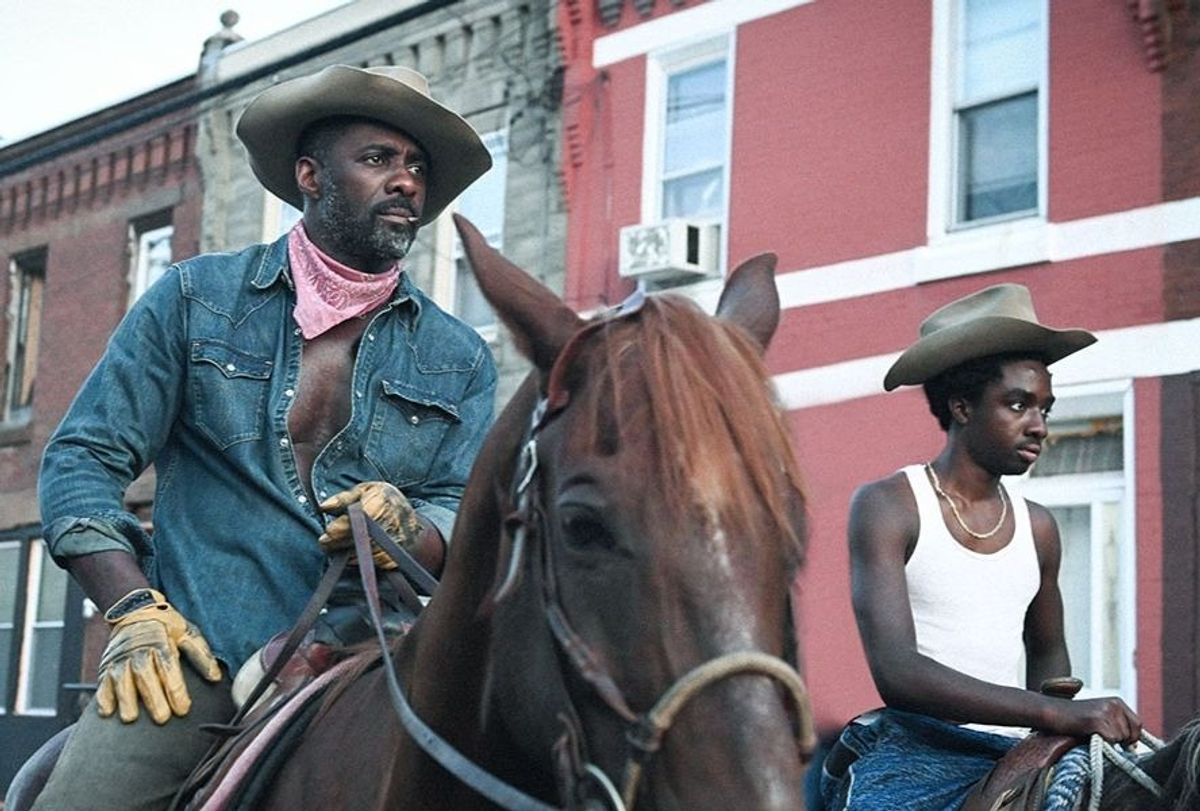 There is a warmth among the Black men and women that form the horseback riding community in North Philadelphia, and the appealing drama "Concrete Cowboy" lets viewers sit around a campfire with these characters as they drink, smoke, and talk about the whitewashing of Black history, real estate development, and other forces threatening their heritage. But this film, which premiered during last fall's Toronto International Film Festival, does not sit back and relax very often.

The story opens with Cole (Caleb McLaughlin of "Stranger Things") being expelled from school in Detroit. His mother drives him to North Philadelphia to spend the summer with his father Harp (Idris Elba), a sanitation worker who is active with the nearby Fletcher Street stables. Cole is more than reluctant; he barely knows his father and does not get along with him when they do talk.

But after spending a night sleeping in the stables — out of necessity, not desire — Cole comes to meet and appreciate the local group of riders. These include Nessi (Lorraine Toussaint), Paris (Jamil "Mil" Prattis) and Esha (Ivannah Mercedes), among others. (Both Prattis and Mercedes are real-life Fletcher Street riders; they talk about riding horses in the city during the film's sweet closing credit sequence). And at the stables, Cole learns how to shovel manure — a blunt metaphor, of course, especially when he goes to clean the stalls wearing new sneakers.

Cole also reconnects with Smush (Jharrel Jerome), who is involved in drug running. Smush is hoping to get enough cash to head out west and find some quiet from the tough city streets. "Concrete Cowboy," therefore, is a familiar morality play where hard work competes against easy money, and Harp and Smush fight for Cole's soul.

Elba, who produced, lends the film gravitas with his assured, world-weary performance, and McLaughlin carries the film with his sympathetic turn as Cole, a teen trying to find his place in the world. The supporting cast provides some verve, especially Toussaint and Mercedes, along with Method Man as local cop Leroy. Jharrel Jerome does what he can to add some shading to Smush, to make this stock character his own.

Filmmaker Ricky Staub, a white man making his feature directorial debut, cowrote the screenplay, an adaptation of Greg Neri's novel, "Ghetto Cowboy," and focuses on Cole's journey to wisdom. Staub uses a handheld camera to give the story some intimacy, and he also provides a strong sense of place, occasionally cutting to shots of sneakers hanging from telephone wires.

The filmmaker does not rush the story. Cole's coming-of-age is less a loss of innocence — though there is that — and more of a search for home. He bonds with Boo, the wildest horse in the Fletcher Street stables, and is told, "Horses are not the only thing that need breaking 'round here," suggesting that he needs to fix his attitude. That does not necessarily mean having his spirit crushed; Cole has life lessons to learn about playing by the rules and how "hard things come before good things." His father's tough-love approach does not make that easy.

"Concrete Cowboy" features only a handful of moments between Harp and Cole, but one is particularly heartfelt. When Cole is frustrated that the horses seem to get more love than he does, Harp puts on some John Coltrane and tells his son about fatherless youth, the incarceration of Black men, and how you can't become a man overnight. It is a beautiful scene and illustrates why Harp is a role model for the other riders.

Smush is the opposite, playing the ends against the middle in the local drug scene, and putting Cole in a difficult position as his accomplice. The friendship between these two teens is interesting in that they rely on each other mostly out of circumstance. It is as if they each need the other to prove something and define themselves. That thread could have been developed more, because this storyline telegraphs every beat to the obvious. It also reinforces a point Paris makes earlier about the senselessness of gun violence.

"Concrete Cowboy" is best when its characters are on horseback. There is a nice scene at a cookout where Harp races his horse, and an amusing bit has Cole playing basketball with Esha astride a horse, trying to block his shot. (There's a hint of romance between them, but lightly done.)

Staub may be trying to cram too many points in the drama that makes some key elements feel shortchanged. A first-act discussion of the conditions in the stables leads to a third-act scene with local authorities. There is also a storyline involving Leroy, who gets involved not just in the Smush subplot but also in the stable narrative. A nice moment depicts Leroy taking Cole to a racetrack to talk to him, and show him what these city cowboys can become.

As the film trots to its conclusion and the plots tie up in unsurprising ways, "Concrete Cowboy" goes for the symbolic rather than the sensible. But even as Harp and Cole break rules to do the right thing, viewers cannot help but root for them.

Addressing issues of Black masculinity, as well as racism and discrimination, Staub's film uses its crowd-pleasing approach to teach its values. "Concrete Cowboy" works best as a vehicle into the little-known and -seen world of the riders, and it is most enjoyable when it is in that world.