Ingraham, who is essentially an informal Trump adviser, alleged that the “DNC may have put the whole thing on” 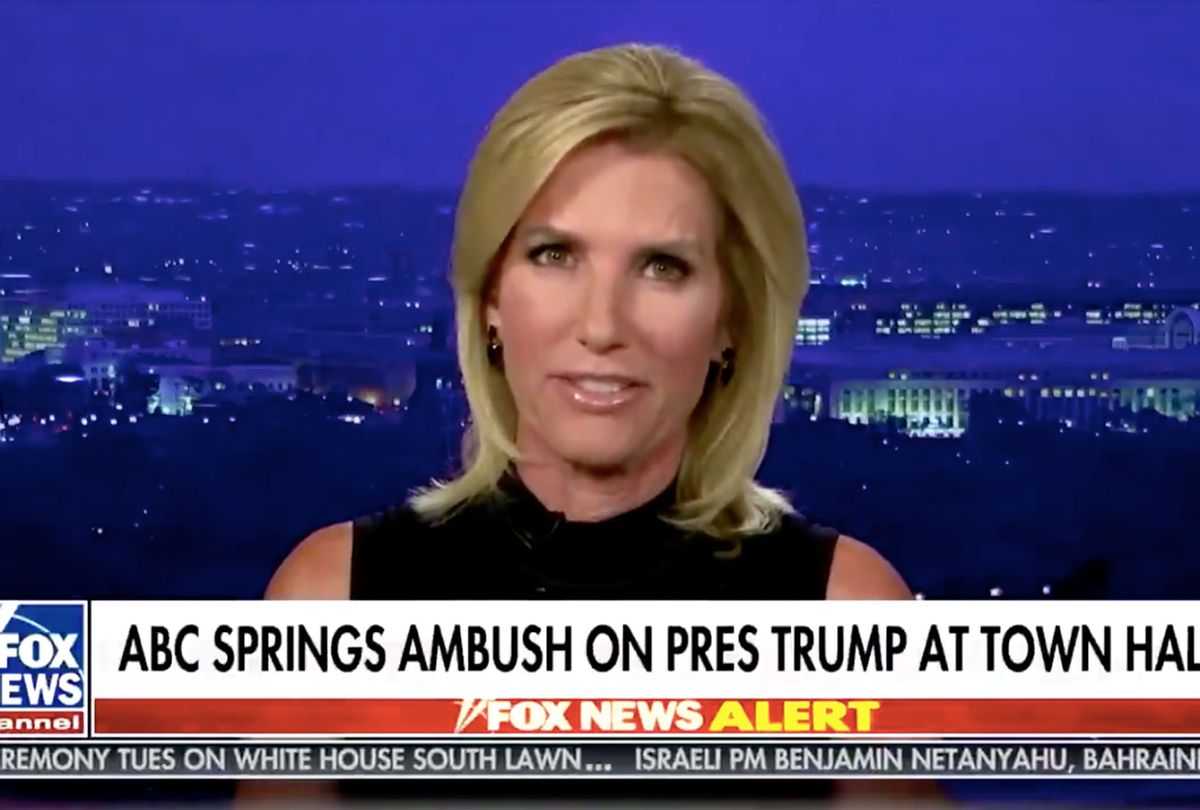 Ingraham, who is essentially an informal Trump adviser, complained that the town hall was moderated by a "Clintonite" — a reference to Stephanopoulos' time as an aide for former President Bill Clinton — and argued that the "DNC may have put the whole thing on."

"The president loves mixing it up with everybody," she claimed. "He did the interview with Jonathan Swan, the 18 tapes of Bob Woodward — now he did this. But this is an ambush."

Guest John McLaughlin, one of Trump's favorite famously-wrong pollsters, noted during the segment that Trump "was very sensitive and demonstrated empathy" when he was questioned by a woman who had just lost her mother.

Trump had a tough night facing questions from actual voters rather than the White House press pool as he repeatedly attempted to deflect blame from his coronavirus response.

Trump insisted that the had worn masks in hospitals and other places before inexplicably blaming Democrats for not instituting a mask mandate.

"They said at the Democrat Convention . . . they're going to do a national mandate. They never did it," Trump said. "Because they're checked out, they never did it."

He went on to blame Democratic rival Joe Biden, who is not the president, for failing to call for a mask mandate, which he did.

"To be clear: I am not currently president," Biden quipped on Twitter.

Trump claimed in the segment that "a lot of people think the masks are not good."

"Who are those people?" Stephanopoulos pressed.

Another voter asked why Trump chose to downplay the pandemic, which has disproportionately impacted low-income communities and people of color.

"I didn't downplay it. I actually — in many ways, I up-played it, in terms of action. My action was very strong," Trump insisted, even though he admitted to journalist Bob Woodward that he wanted to "always play it down"

Paul Tubiana, who said he voted for Trump in 2016, described himself as "conservative, pro-life and diabetic."

"I've had to dodge people who don't care about social distancing and wearing face masks," he said. "I thought you were doing a good job with the pandemic response until about May 1. Then you took your foot off the gas pedal. Why did you throw vulnerable people like me under the bus?"

"We really didn't Paul," Trump replied, insisting that his leadership was better than previous administrations.

During another point, Stephanopoulos pressed Trump on his claim that the coronavirus would "disappear."

"It would go away without the vaccine . . . but it's going to go away a lot faster with it," Trump doubled down, before claiming that "you'll develop like a herd mentality. It's going to be herd-developed, and that's going to happen. That will all happen."

Trump was apparently referring to "herd immunity," which scientists believe would require well over half the country to be infected with a disease that often has serious longterm health impacts and would likely kill at least one million people in the U.S. alone.

Ellesia Blaque, a professor, pressed Trump on his push to repeal Obamacare, which includes protections for people with pre-existing conditions such as her.

Trump interrupted during the question to insist he does not support striking down pre-existing condition protections, even though his administration is suing to strike down the entire Obamacare law.

"Please stop, and let me finish my question, sir," Blaque replied. "Should that be removed within a 36- to 72-hour period without my medication, I will be dead."

"You fought to repeal Obamacare. You're arguing the Supreme Court right now to strike it down — that would do away with pre-existing conditions," he said. "I interviewed you in June of last year. You said the healthcare plan would come in two weeks. You could Chris Wallace that this summer it'd come in three weeks."

"It doesn't matter. I have it all ready, and it's a much better plan for you," Trump responded, offering no details on his better healthcare plan.

During another segment, Pastor Carl Day pressed Trump on his campaign slogan.

"You've coined the phrase 'Make America Great Again.' When has America been great for African-Americans in the ghetto of America?" he asked. "Are you aware of how tone-deaf that comes off to the African-American community?"

Trump responded by claiming he was doing well with Black voters in the polls (he is not) and bragged that Black Americans experienced "the best single moment in the history of the African-American people in this country" before the pandemic.

Day pressed Trump on why he refused to acknowledge there was a "race problem" in America.

"Well, I hope there's not a race problem," Trump replied. "I can tell you, there's none with me."