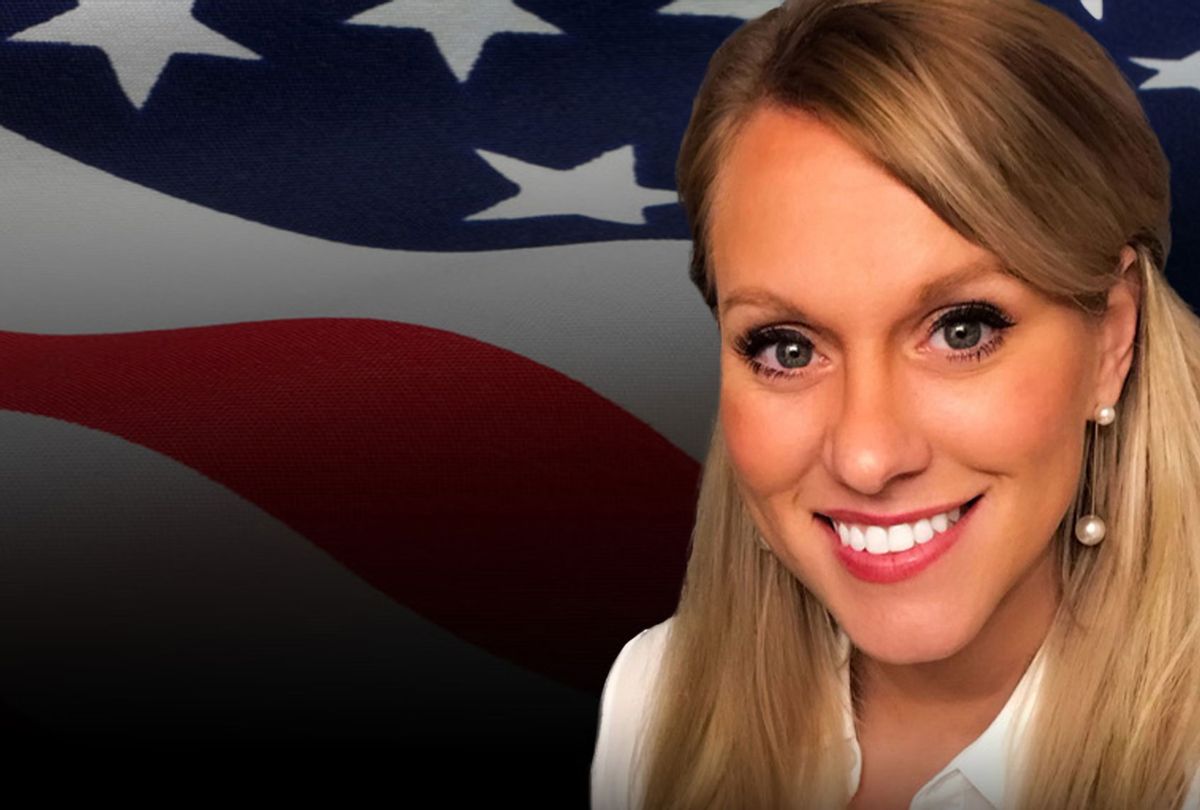 Lauren Witzke, a conservative activist who has promoted the baseless QAnon conspiracy theory, won the Delaware Republican Senate primary on Tuesday despite opposition from the state party.

Witzke defeated Marine veteran Jim Demartino, an attorney who was endorsed by the Delaware GOP, 57-43, carrying each of the state's three counties.

The Daily Beast's Will Sommer noted that Witzke has promoted a QAnon hashtag. She also went to an event wearing a QAnon shirt, "making her the second QAnon supporter to win a Republican Senate nomination this cycle" alongside Oregon's Jo Rae Perkins.

Witzke, who worked as an Iowa campaign operative for President Donald Trump, tried to distance herself from the inane conspiracy theory during the campaign.

She told the Associated Press that she "stopped promoting QAnon months earlier" and now claims to believe it is "mainstream psyops to get people to 'trust the plan' and not do anything."

"I certainly think it's more hype than substance," she told the outlet.

Despite Witzke's attempt to downplay her ties to the conspiracy theory, some Republican voters backed her specifically because of her support for QAnon.

"She is a supporter of them, and so am I," 18-year-old Dover student Maggie Kosior told the AP. "They're condemning the right people, I think."

QAnon is a conspiracy theory based on "clues" dropped online by a would-be government insider called "Q" about the "deep state" and an alleged child trafficking ring involving Trump's political opponents. It has been labeled a domestic terrorism threat by the FBI.

Witzke, who claims she was once a drug-runner for "Mexican cartels," used Trump's "America First" slogan in her campaign and declared that God had "anointed" Trump.

She vowed during the campaign to push to ban immigration to the U.S. for 10 years and to support legislation to "incentivize marriage and child-bearing" while opposing any restriction on guns.

Witzke will face Sen. Chris Coons, D-Del., who easily won his primary with 73% of the vote and is the heavy favorite in November.

Perkins, who won the Oregon Senate primary, is also widely expected to lose in her race against Sen. Jeff Merkley, D-Ore.

But Congress is expected to add at least one QAnon supporter this election after Marjorie Taylor Greene won a House primary in a heavily-Republican Georgia district despite opposition from party leaders.

Trump, who has embraced the backing of QAnon supporters, praised Greene as a "future Republican star."

Though about 80 candidates — mostly Republican — linked to the QAnon conspiracy theory have run in this year's primaries, most have been unsuccessful, according to Media Matters.

QAnon "could be Russian propaganda or a basement dweller," he tweeted after Greene's win. "Regardless, no place in Congress for these conspiracies."

"QAnon and the conspiracy theories it promotes are a danger and a threat that has no place in our country's politics," Riggleman said in a statement. "I condemn this movement and urge all Americans to join me in taking this step to exclude them and other extreme conspiracy theories from the national discourse."