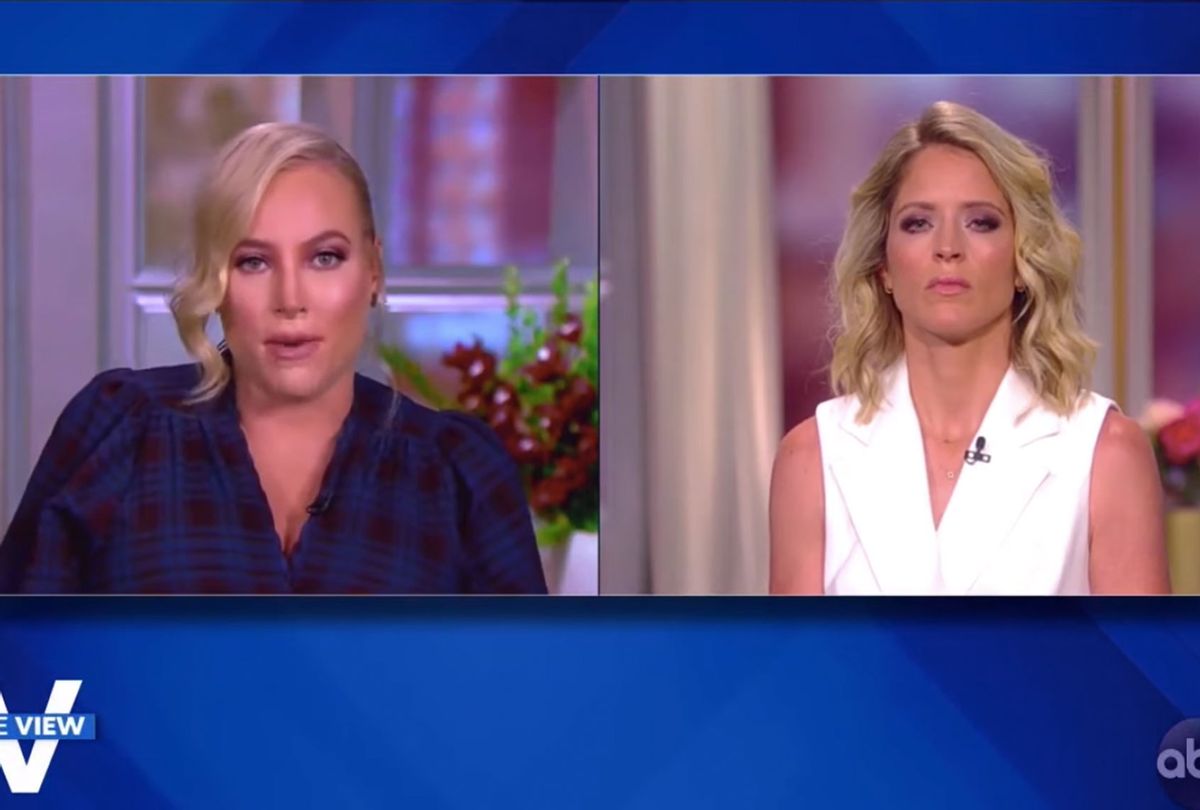 Meghan McCain and Sara Haines on The View (ABC)
--

"The View's" Meghan McCain says that she was "lied to" by doctors that she shouldn't wear a mask early on in the pandemic because others needed them. It's a false claim that was quickly fact-checked by co-host Sara Haines, who tried to explain that she was misconstruing the importance of getting personal protective equipment to hospitals and healthcare workers.

During Thursday's opening segment, the ladies addressed the confusing back and forth between President Donald Trump and his CDC virologist expert Dr. Robert Redfield in which Trump claimed Redfield didn't know what he was talking about with regard to masks.

"When it comes to the mask issue, I think part of the problem is the American public has been lied to, and we can't forget that information," claimed McCain. "The last conversation I had in studio at 'The View,' I was told by a doctor that you don't need to wear a mask and they should be donated to health care workers. And we were lied to because there was a worry there weren't going to be enough masks to first responders. I would have gladly given my mask in any way to make that sacrifice, but it was misinformation."

McCain didn't name which doctor she spoke to, but early on in the pandemic when people were talking about masks, the CDC began encouraging masks as early as the first week in April, around the time Trump was issuing the first nation-wide stay-at-home order. Personal protective equipment was getting scarce and doctors and nurses were starting to get sick after exposure. Americans began making masks of their own and delivering them to their local hospitals.

The last time "The View" aired in the studio was March 11, but just the day before, Trump was still telling Americans, "Just stay calm. It will go away."

On March 12, Trump announced, "You know, you see what's going on. And so I just wanted that to stop as it pertains to the United States. And that's what we've done. We've stopped it."

It wasn't until April that Trump invoked the first Defense Production Act for companies to start creating more ventilator and N95 masks.

Sara Haines cut in to try and explain to McCain that early on people simply didn't know. At the same time, the president, who was being advised by experts, was saying the virus would disappear.

"What you said about masks and that early information, my problem with that is early on, I think people were doing the best they can," said Haines. "We saw a lot of doctors and scientists –"

"Sara, Sara," McCain cut in, stopping Haines from speaking. "With all due respect, the doctors knew. They lied and they said we should not be wearing masks. Again, had I just been told the truth about the American public, I'm one of the people that I ended up — I had masks from a trip I took in my house and I ended up having my husband give it away. I was early pregnant at that time. There was a lot unknown. I don't — I know there were things going on, but that lie has unsettled me, and now I don't go anywhere without a mask because obviously we know the truth, but we can't be screwing around with things like this, and again, when you are already a person which a lot of conservatives are, who are skeptical of the government, skeptical of big pharma, and big business, I don't think it's important. People should be wearing their masks. It's not a conversation we need to have now, but I was told different by doctors."

By the end of March, less than a month after "The View" stopped airing in their studio, the CDC announced that masks should be worn.

McCain claimed that new polling numbers show Americans don't care about COVID-19 anyway because a new Kaiser Family Foundation poll showed the virus dropped to three in the list of issues they care about.