"PEN15" returns for another swim into the messiness of seventh grade 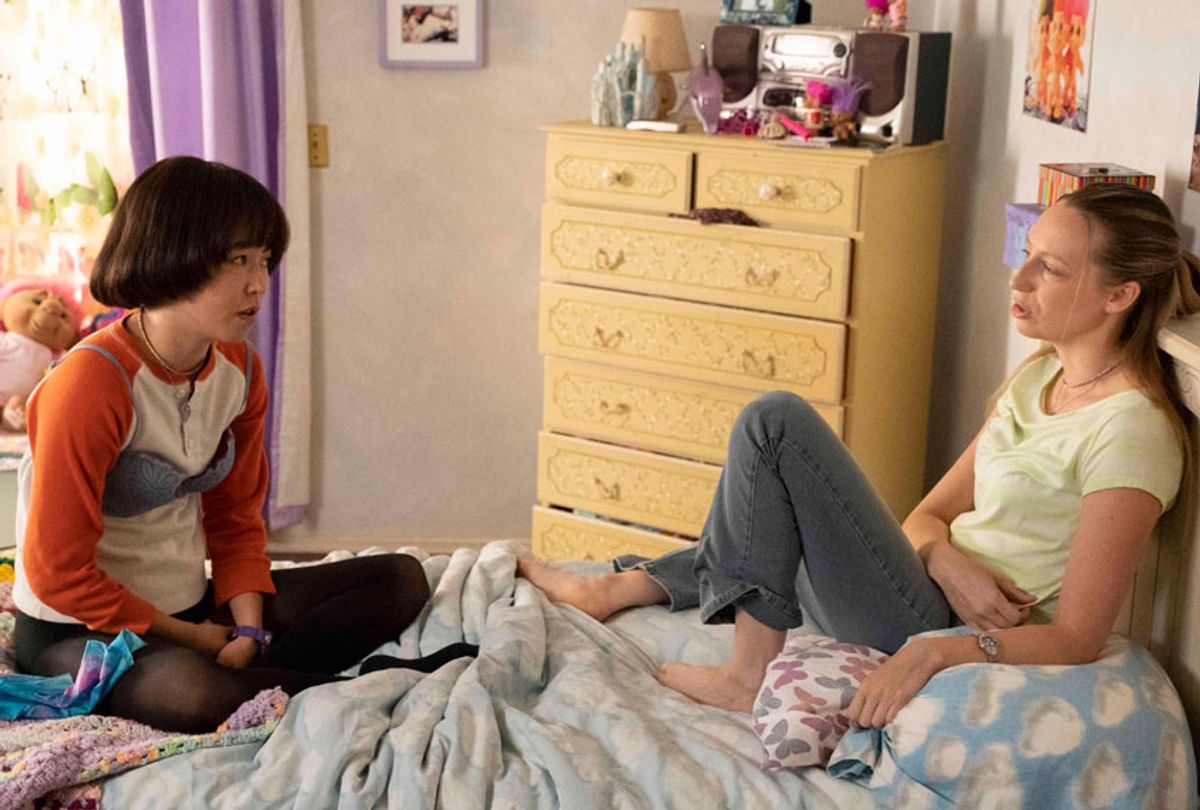 Maya and Anna, the two best friends at the center of "PEN15," each wear half of a broken heart around their necks, the classic "best friends forever" pendant recognized by women of all ages. Of course, that pendant is also a representation of what "PEN15" is all about. In a very real way, the girls are as close as sisters, making their relationships beautiful and perilous. In the first season, when a fight temporarily fractured their relationship, Anna took her family troubles to an unfriendly listener, the most popular girl in class. But Maya keeps secrets from Anna too, including the fact that she's started menstruating.

Living through middle school means surviving what feels like eons of awkwardness and confusion imprinting themselves on your body and soul. Time graduates us from those grades, but a part of us never leaves its psychological hellhole. And this nagging, sometimes crippling feeling is precisely what Maya Erskine, Anna Konkle and Sam Zvibleman tap into uproariously with "PEN15."

But for Erskine's and Konkle's barely adolescent alter-egos Maya and Anna, seventh grade is about to get a whole lot tougher to navigate. Anna's and Maya's developing sexual awareness continues to be at odds with their lingering innocence; Maya still wears Care Bears t-shirts unironically, and treats her body as if it were a hopper ball whenever she secretly and enthusiastically masturbates.

Anna harbors a crush on the coolest boy in the grade, and she's invisible to him. Actually, it's crueler than that: there are times that the girls take chances by being painfully vulnerable and open, only to be crushed or told in so many words, some terrible, that they're undesirable. Rejection is a true bruiser to the most emotionally stalwart adults, but to a teenage girl it's shattering.

That means Maya and Anna's struggles to navigate this discordant space between childhood and adolescence grow more acute, as the protective bubble of mutual validation they've created around each other is popped time and again by outside forces.

For all the lighthearted, nostalgia-steeped fun "PEN15" plays with, it sows a lot of its laughter in the fertile soil of vicarious horror and embarrassment we've all felt at some time or another, regardless of whether we entered our teenage years in the early 'aughts, when the series is set. In that regard, the series uses era-specific details evocatively without piling on the references like so many cheap triggers.

A passage that kicks off with the girls trying to watch an episode of the Nickelodeon series "Are You Afraid of the Dark?" transitions into the pair's innocuous foray into witchcraft. Girls of all ages engage in this harmless fantasy — some for the sheer fun of it, some to seize some sense of power in the face of situations over which they feel powerless. Anna and Maya stumble upon their makeshift approximation of Wicca when their after-school TV viewing is interrupted by a loud, crashing argument between Anna's parents. But "PEN15" never keeps things serious for too long, and soon enough their madcap spellcasting gets out of control and has Maya speaking in tongues, eyes rolling back in her head.

Middle school can be hell for a lot of reasons, but the way Season 2 digs into its saddest side — by tuning in to the background noise previously overpowered by the loud love song of friendship — brings out new shading in a show that was already unique. Anna's rupturing home life intrudes on her angst over schoolyard crushes and a rumor mill powered by slut-shaming, but those problems still share a front seat because that's the way the teen brain works.

But it also touches off a rebellious streak in Maya that cracks open the door to the stage of life when children begin to detach from and even reject their parents. This is one of the ways that "PEN15" broadens its point of view beyond those of its two gawky heroines to grant a richly developed empathetic look at their parents and peers.

Maya's parents may be married, but with her musician father on the road most of the time, her mother Yuki (Mutosuko Erskine, the star's actual mom) is left to raise her and her brother Shuji (Dallas Liu) on her own. And Yuki often struggles to be patient with her loud, rambunctious daughter, which Maya interprets as her mother loving her less than her brother.

Elsewhere, Maya and Anna's male classmates are just as perplexed about this stage of life as they are, particularly Maya's bandmate Sam (Taj Cross), whom she rejected after he confessed his feelings to her at a school dance; and Gabe (Dylan Gage), who isn't clear on his feelings for anyone — possibly even his own close friends.

Attention from the opposite sex can be validating, befuddling, or deeply cruel, and platonic relationships at that age are no less complicated. Lingering around Maya and Anna is an ever-present despair in their shared realization that they won't always be equals – and in very real ways, they've already begun the process of growing in different directions but not necessarily apart. The first season brushes upon this at a seventh-grade dance, with the second season resuming that interlude by way of a school play.

Erskine and Konkle confidently evince the tortured middle school state of mind along with their characters' ungainly immaturity through the mere act of shoving their 30-something bodies into 13-year-old characters.

Skillful costuming certainly helps here, along with the fact that Erskine and Konkle physically pull off this age well enough for newcomers to the series to be shocked at the fact that its stars are actually 33. That's not to say they look like school-aged kids; you can tell they're adults acting like the actual young teenagers surrounding them. They're also playing their roles with complete sincerity, so it works.

Slap some braces on Konkle and flatten out her hair, and she transforms into that gawky wallflower many of us were, or sort of remember – Anna is that girl whose growth spurt kicked in before everyone else's, the one the boys aren't sure how to contend with. Erskine's Maya is an explosion of unrestrained feelings and flailing, rubbery limbs capped by an embarrassing homegrown bowl cut.

For all their insecurities, Maya and Anna insistently see the world with them at the center of it, painting "PEN15" with a level of confidence that makes the laugh land squarely and the pain hit with equal force. Zvibleman, who directs the seven Season 2 episodes currently streaming (the second half is due next year), has a way of capturing the impact of a careless comment as it hits the characters squarely across the jaw; while the stars excel at telegraphing each wallop through their expressions so as to make the audience hurt right alongside them.

No development bring this out more often than Maya and Anna's too-sudden friendship with a classmate named Maura (Ashlee Grubbs) who drops into their lives out of nowhere and mounts a campaign to insinuate herself into the duo as their third best friend. Really, though, she's trying to unseat Maya from the throne Anna's affections, even to the point of othering her by making racist comments about Maya's Japanese mother.

But Maura has all the right clothes and tosses around cool kid slang the girls incorporate into their vocabulary, along with other terms they shouldn't be saying, and her assault of kindness and Maya and Anna's desperation to be liked draws them into her web. Of course, Maura's life isn't anywhere near perfection, and is certainly no closer to that undefinable ideal than Maya's or Anna's; being 12 or 13, none of them know what to do about that or whether to trust their feelings.

And this, I suppose, is the singular hook of this show . . . along with the spontaneous choreography, its gleeful treatment of bodily functions, and the girls' celebration of sugar and glitter. If a side effect of our modern age is the nostalgic yearning to return to an imagined innocence of a romanticized past, then "PEN15" is a kindly reminder to thank our lucky stars that there's no going back.

The show's enduring sweetness always rested in Maya and Anna's glorious gawkiness, and the way it cements their devotion to one another. Now, it confirms that notion that not even the supposedly cool kids had great lives. They were simply better at masking their pain, or they had better accessories. Appearing cool is a lot easier if you have stuff that other kids desire or want access to.

And in this way, the show helps us feel better about those cringeworthy memories we wish weren't embossed on our consciousness. Challenging as adulthood can be in 2020, at least we don't have to go back to our teens.

The first half of Season 2 of "PEN15," and all of Season 1, are currently streaming on Hulu. The back half of the second season is set to debut in 2021.