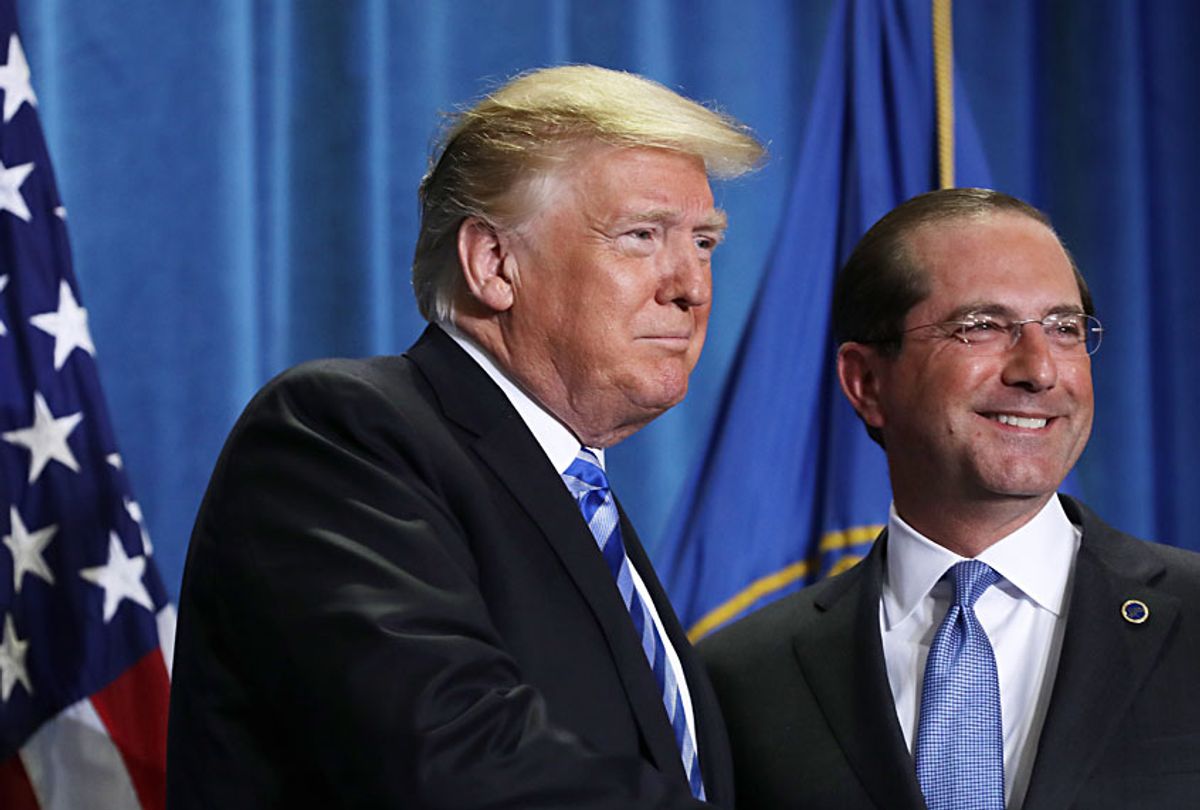 Senate Minority Leader Chuck Schumer on Tuesday morning demanded the immediate resignation of Health and Human Services Secretary Alex Azar for remaining "almost entirely silent" in the wake of explosive reporting detailing efforts by his subordinates to distort and censor the CDC's weekly Covid-19 reports for the political benefit of President Donald Trump.

"Too many people within HHS are trying to suppress the science," the New York Democrat said in a speech on the Senate floor. "It has become abundantly clear that the leadership of the Department of Health and Human Services has allowed perhaps the most important federal agency right now to become subservient to the president's daily whims. So today, I'm calling on Secretary Azar to resign immediately."

"We need a Secretary of Health and Human Services who will look out for the American people," added Schumer, "not President Trump's political interests."

Schumer's call came days after Michael Caputo, the top communications official at HHS, publicly accused CDC scientists of engaging in "sedition" against Trump and baselessly warned that "there are hit squads being trained all over this country" to prevent President Donald Trump from winning reelection.

The department responded to Caputo's unhinged remarks with a statement praising the former Trump campaign aide as "a critical, integral part of the president's coronavirus response, leading on public messaging as Americans need public health information to defeat the Covid-19 pandemic."

"Secretary Azar cannot meet his basic responsibilities while allowing Michael A. Caputo, a yes-man for President Trump with no scientific expertise who publicly attacked CDC scientists and privately interfered with key CDC reports, to continue serving in such an influential role," said Murray.

Politico reported last Friday that Caputo and his top science adviser, Paul Alexander, have for months been working to alter the CDC's Morbidity and Mortality Weekly Reports, a crucial resource for experts and the public seeking to track the spread of Covid-19 and understand the state of the pandemic.

"Since Michael Caputo, a former Trump campaign official with no medical or scientific background, was installed in April as the Health and Human Services department's new spokesperson, there have been substantial efforts to align the reports with Trump's statements, including the president's claims that fears about the outbreak are overstated, or stop the reports altogether," according to Politico.

Following the explosive reporting, the House Select Subcommittee on the Coronavirus Crisis on Monday launched an investigation into the Trump officials' reported interference with the CDC's work, declaring that the "public needs and deserves truthful scientific information so they can keep themselves and their families healthy."

"We are gravely concerned by reports showing that the president's political appointees at HHS have sought to help him downplay the risks of the coronavirus crisis by attempting to alter, delay, and block critical scientific reports from CDC," members of the subcommittee wrote in a letter (pdf) to Azar and CDC director Dr. Robert Redfield.

"During the pandemic, experts have relied on these reports to determine how the virus spreads and who is at greatest risk," the lawmakers added. "Yet HHS officials apparently viewed these scientific reports as opportunities for political manipulation."