Mourn Ruth Bader Ginsburg, but don't give in to despair — it's time to fight like hell instead 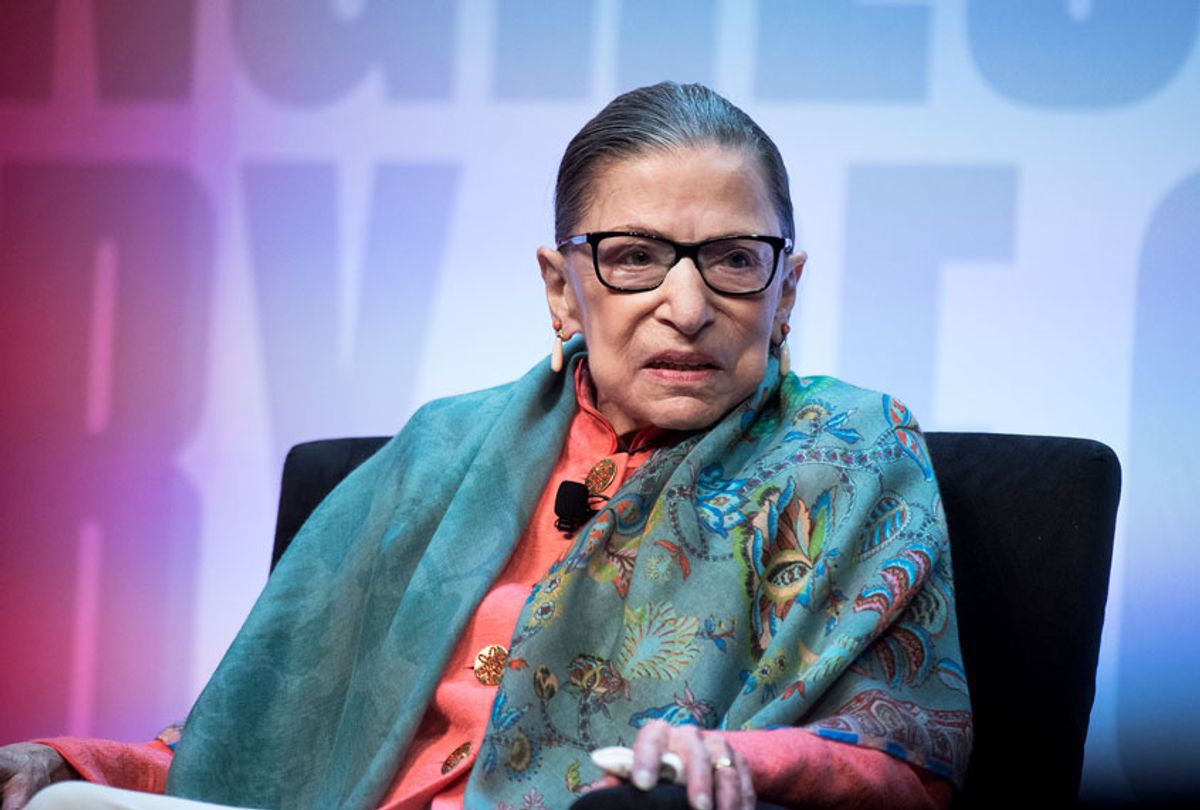 Friday night, when the news of the death of Justice Ruth Bader Ginsburg hit, I was struck by the same wave of hopeless despair that anyone who cares about the future of this country felt. It's not an exaggeration to say that the weight of the world rested on the shoulders of this diminutive 87-year-old woman who had been battling cancer for many years. With her death, Donald Trump and the Senate Republicans, led by the depraved liar and hypocrite Mitch McConnell, have the power to fill her seat on the Supreme Court with another right wing extremist. With a comfortable 6-3 conservative majority on the court, the Republican mission to dismantle the already battered remains of our democracy will be protected from the occasional bout of conscience from Chief Justice John Roberts.

Things are bad. Really, really bad. It would be foolish to deny it. We have a reality TV fascist in the Oval Office who has been lawsuit-happy when it comes to his efforts to steal himself a second term against the strong will of the American people, and now he's going to get himself a third Supreme Court justice to grease the wheels. Plus, the uncorking of right wing assaults on human rights — a situation which seemed dire after Justice Brett Kavanaugh replaced the at-times-reluctant supporter of equal rights, Justice Anthony Kennedy — are going to spin wildly out of control.

Women's rights, LGBTQ rights, voting rights, religious freedom, health care access: These are all on the chopping block now, in ways that will likely make previous assaults seem like a game of tiddlywinks.

So I forgive you (and myself) if you need to sit in the corner for a little with a bottle of whiskey, or a good red wine, as Ginsburg would have done. But once we're done with that, it's time to pick ourselves up, dust ourselves off, get back into it and fight like hell.

It is, after all, what Ginsburg would have done.

Ginsburg earned a reputation for being so tough and accomplished that the hagiography started while she was still alive and able to enjoy it. So tough, in fact, when I told my friends over Zoom that she had died, they refused to believe me and demanded to know my source. (Phone alert from NPR.) Being known for such a ferocious tenacity that people can't even believe you could die, even when you've been hospitalized on and off for months from cancer, is quite the quality.

It is this strength that we must channel for what is shaping up to be a fight for democracy itself.

It's tempting to look at the situation, throw your hands up, and start looking into immigration laws for other countries. But when that urge strikes, I recommend diving into one of the many lengthy obituaries written about Ginsburg, instead of just skimming the first couple of paragraphs. Or watch one of movies about her life, if you prefer. Or read "Notorious RBG: The Life and Times of Ruth Bader Ginsburg," the book that kicked off all the hosannas for the still-living Ginsburg in the past few years.

What you'll find is the story of a woman who looked at a world that seemingly had no space for her or her ideas, shrugged, and forged ahead anyway. She was one of only nine women in her class at Harvard Law. When she graduated, law firms weren't interested in hiring women, especially if they were married mothers or Jewish, and Ginsburg was both. And yet she ended up on the Supreme Court.

But even more importantly, she won a series of victories as a feminist lawyer that frankly would seem impossible, if we didn't live in the world she had created by doing so. In the 1970s, Ginsburg argued six — six! — cases in front of the Supreme Court, winning five.

As Ian Millhiser of Vox notes, this required arguing in front of a bunch of male judges who sprung from "a society that was so sexist that many of them had never had a female colleague." These were men whose power and privilege rested, in large part, upon centuries of oppression of women, and like most men of the time, they were aware on some level that women's equality meant giving up some of that power and privilege.

Convincing such men to literally vote to dismantle, bit by bit, a power structure geared to benefit them at the expense of women was a task so enormous that it's genuinely hard to imagine, especially in the real world, where people are stubborn and blinkered and selfish, so much unlike the glossy Hollywood world where justice always prevails in the end.

But damn it, Ginsburg got her Hollywood ending in those cases. It was, as her biographer and friend Irin Carmon writes, because she embraced a worldview that "was as bold as it was optimistic." It was not just because Ginsburg had the moral clarity to see what was wrong about sexism, but because she had the imagination to picture a better world, one where men and women are partners and friends, and everyone is more free to be themselves and not circumscribed by absurd gender roles.

It's arguable that Ginsburg was, if anything, too tenacious. She was too stubborn to retire from the court when there was a chance Barack Obama could nominate her replacement, a decision that no one should bother to defend. But, as with most strong-willed people, her flaws flowed from the same traits that made her great. And we should embrace that pig-headed unwillingness to give up, even when it seems like giving up is the only option.

The fights ahead of us are onerous, starting with the fight to prevent Trump and McConnell from putting whatever troglodyte they have in mind on the court. These fights may seem impossible, in fact. (But nothing is impossible, including convincing Sen. Susan Collins, R-Maine, to save her seat by doing the right thing for once in her miserable career.) Giving into despair might seem like the only option.

But however hard it seems, it's probably not as hard as it was for Ginsburg to stand up — all 5'1" of her — and argue to all-male panels of judges about why the very system that gave them their power was wrong. She was forever humble about her courage, often describing herself as "lucky." But she wasn't lucky. She was smart, strategic and tenacious. And we have to be those things if we are to protect the legacy that she and other civil rights activists and leaders have built.

If it seems too difficult at times, just remember to ask yourself what RBG would have done. You know the answer is "keep fighting." So that is what we will do.